FORD GETS CROSS AND ACTIVE (some text hidden)

If you need a supermini but would like a crossover, Ford's Fiesta Active might well suit. Jonathan Crouch takes a look.

Here's a Fiesta - but not quite as you know it. For those who kind of like the idea of a small SUV but aren't quite ready to take the plunge, the Fiesta Active might be just perfect. A few off road cues, some extra traction for slippery surfaces and efficient running costs will all make it tempting to those wavering on the brink of small Crossover ownership.

Just about every market segment seems to offer an SUV option these days and the supermini sector is no exception. Ever since the turn of the century, we've had superminis on sale with ruggedized exteriors - usually marked out by body cladding and a bit of extra ride height. Long-forgotten contenders that come to mind include the Rover Streetwise, the Volkswagen Polo Dune, the Citroen C3 XTR and, a little more seriously, the Suzuki Swift 4x4. This Ford Fiesta Active is a slightly more serious effort than most of those: thanks to a multi-mode traction control system, it actually does have some 'off piste' ability for a start, though you'd be wise to limit that to rough tracks that aren't too arduous. Does this trendy variant make sense? Let's find out.

As part of our test, we took the chance to try this car on a slippery surface so we could sample this variant's selectable drive modes. There are three settings - Eco, Normal and Slippery. This car's rough-terrain capabilities are also enhanced by a slightly higher ride height and by the adoption of Ford's Electronic Stability Programme (ESP) with Hill Start Assist. Other changes include a 10mm wider track, suspension revisions and optimised front shock absorbers that feature a special hydraulic rebound stopper that smooths out the bumps or jolts you'd get over rougher surfaces. Fortunately, none of this has significantly detracted from the standard Fiesta's class-leading handling package. Under the bonnet, the usual 1.0-litre EcoBoost petrol engine is offered with three different power outputs: 95PS in conventional form and 125 or 155PS with Ford's latest EcoBoost Hybrid mild hybrid tech. All these variants get a six-speed manual gearbox. If you want auto transmission, there's also a non-hybrid version of the 125PS 1.0T EcoBoost unit. The 1.0T turbocharged three-cylinder powerplant features advanced technologies including high-pressure direct fuel injection, Twin-independent Variable Cam Timing and an innovative offset crankshaft design for decent refinement. There's also a version of the brand's usual 1.5-litre TDCi diesel, developing 85PS. 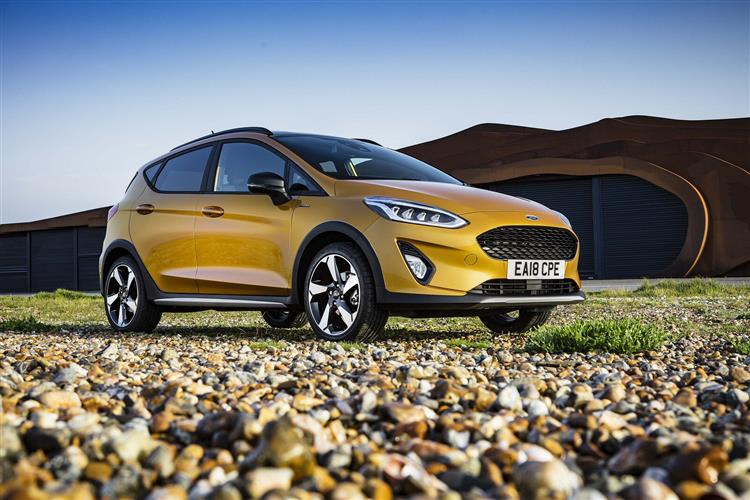