Volvo estates aren't what they used to be. Jonathan Crouch checks out the second generation version of the brand's V60 mid-sized estate.

Volvo's regeneration continues with this second generation V60 mid-sized estate model. It gets the company's sophisticated SPA chassis, class-leading safety tech and two choices for Plug-in hybrid power. If you're looking at German rivals like the Audi A4 Avant, the BMW 3 Series Touring or the Mercedes C-Class Estate, this Swedish alternative might be a refreshingly different option.

Estate cars. They used to be things you bought to carry around loads of kit. Not any more. These days, most people wanting to do that will buy an MPV or an SUV. Leaving estates to focus almost completely on style and driving dynamics. Which is why compact mid-sized premium-branded wagons like Audi's A4 Avant and BMW's 3 Series Touring can't actually carry much more than the saloons upon which they're based. Now you wouldn't expect Volvo, a solid, traditional brand that pioneered the kind of boxy estate car into which you could fit a fridge (or several), to want much to do with this kind of trendy form over function approach. But you'd be wrong. The Swedish brand actually invented this style-conscious market niche long before the German brands turned up, bringing us the classic P1800E model that Roger Moore drove as 'The Saint' way back in the Sixties. But it took them until 2010 to return to it with the first generation version of their V60 model. That car wasn't quite good enough to significantly trouble its dominant German-branded rivals. But this design, its successor, might well be.

As usual with Volvo, all the engines on offer are 2.0-litre four cylinder turbocharged units bolted to the brand's sophisticated 'SPA' 'Scalable Product Architecture' platform we've already seen used in the company's XC60, XC90, S90 and V90 models. Many V60 customers may still want a diesel, the 197hp B4 mild hybrid unit, which (like every other engine in the range) is mated to an 8-speed auto gearbox. But increasingly in this segment, there's great interest in petrol power, so to meet that need, Volvo now provides this car with three mainstream mild hybrid petrol units, the 163hp B3, the 197hp B4 and the 250hp B5. Avoid entry-level trim and there's also a 300hp B6 petrol model that only comes in AWD form. Talking of AWD, you have to have that if you go for the 'Cross Country' variant, which can be had either with the 250hp B5 mild hybrid petrol unit or the 197hp B4 diesel. There are also two 'Recharge' PHEV AWD powertrain options that both mate their engines to an 87hp electric motor. There a T6 Plug-in hybrid that uses a 253hp unit. And a Polestar Engineered T8 Plug-in hybrid that features a 318hp powerplant. Whichever V60 variant you choose, as usual with Volvo models, there's a standard 'Drive Mode Settings' system, one of those set-ups now familiar in this segment that can tailor throttle response, steering feel and auto gearshift timings to suit the way you want to drive. Plus there's the option of adding in Volvo's 'Pilot Assist' system. This is a set-up that at cruising speeds of up to 80mph can effectively drive for you. 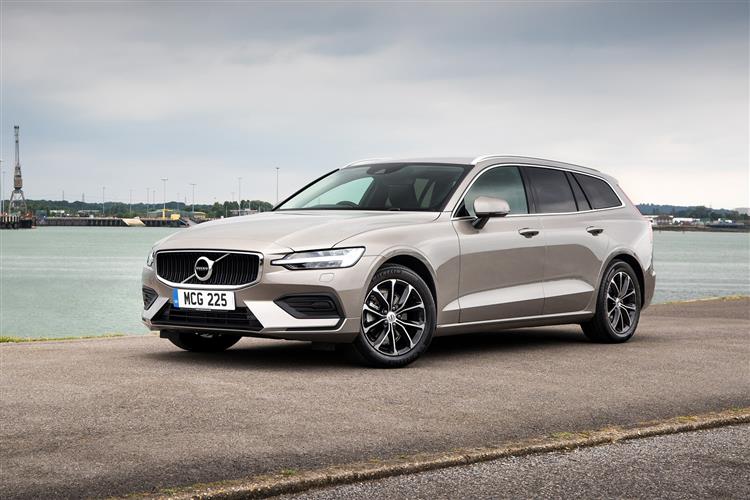