Volkswagen's sleek Arteon was launched as a Gran Turismo-style five-door hatch model in 2017 to head up the brand's range but it's remained a rare sight on our roads. Now it's been revised, there's the option of a 'Shooting Brake'-style estate and plug-in hybrid tech is available too, plus there's a top performance Arteon R variant.

Uniqueness is a quality you usually have to pay royally for, especially when it comes to cars affordable enough for you and I to consider. Once upon a time, drivers seeking it in the Mondeo medium range market would pay a premium for a prestigious badge and feel themselves special with an Audi, a BMW or a Mercedes on the driveway. But in an age where so many now do just that, you begin to wonder these days just how special that would be. So what if uniqueness - specialness - in a car of this kind were to be not in the badge on your keyfob but in the design of the car itself? Something very different from anything else you could buy for the money. Something like this, the Volkswagen Arteon, now much improved. Quite a few of the underpinnings used in this model are borrowed from humbler members of the Volkswagen line-up - but then that's also the case with obvious rivals. It's the dressing that counts, which in this case is very smart indeed and built around a whole raft of efficient high technology. Let's check it out.

There are three turbo petrol units and two diesel engines in the mainstream Arteon line-up. The TSI petrols range from 190PS to 280PS, while the new EVO TDI diesels have either 150PS or 200PS and are fitted with an updated selective catalytic reduction filter and a new Ad Blue system. Buyers choose between a 6-speed manual or a 7-speed dual clutch DSG automatic gearbox - and four-wheel-drive is offered across the range. There are no mild hybrid powertrains because they won't work with this car's MQB platform. Beyond the mainstream powerplants, there are also a couple of engines new to Arteon buyers. The Arteon eHybrid uses the plug-in hybrid powertrain from the Passat GTE, a 160PS 1.4 litre four-cylinder turbo petrol powerplant mated to a 115PS electric motor giving a combined output of 215PS via a DSG auto gearbox. This plug-in model offers an electric driving range of 33 miles and can run in all electric form at up to 87mph. At the top of the range is the Arteon R, which uses a 2.0-litre TSI turbo petrol engine with 320PS, a 7-speed DSG auto gearbox and an updated 4MOTION four-wheel-drive system. 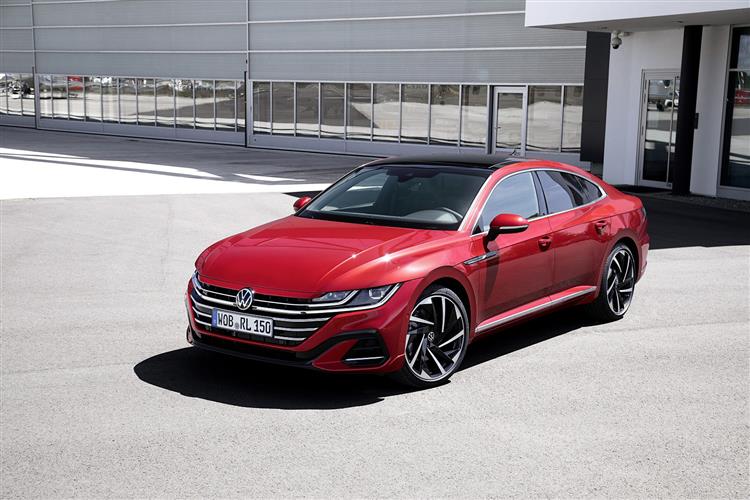