The Velar has established itself as a really credible contender in the mid part of the Range Rover model line-up. Jonathan Crouch takes a look at the improved version.

The Velar is arguably the most sporting Range Rover yet made - and very much the Solihull brand's interpretation of what a really premium mid-sized luxury SUV should be. If you're looking at something like an upper-spec Mercedes GLC Coupe or BMW X4 but want a car in this class with a bit more substance - something better, something.. Different, you're exactly the kind of person this Range Rover Velar is aimed at. And in this revised form, it's an even more complete package.

The very first luxury SUV was a Range Rover, a pioneering 4x4 first launched back in 1970. Prior to that car's original introduction, a fleet of 26 pre-production models were used by development engineers and these ran under the 'Velar' name, Land Rover keen to hide the revolutionary vehicle's real identity, the word derived from the Latin 'velaris', meaning to veil or cover. Almost half a century later in 2017, the Velar name returned to the Range Rover line-up, used to badged the brand's fourth model, a mid-sized contender that aimed to plug the previous gap between the Evoque and the Range Rover Sport. The Solihull brand knows that premium German rivals have set a high standard in this market segment, so spared no effort in building in advanced technology, compelling design and absolute attention to detail. But time moves on - and fortunately, the Velar has moved on with it. With this revised model, let's see just how far.

The Velar is built on the same IQ platform that underpins the extraordinarily successful Jaguar F-PACE. On top of that sits a light, stiff, aluminium-intensive body and this, together with double-wishbone front and Integral Link rear suspension, should provide the perfect basis for the agile handling, excellent ride comfort and impressive refinement this car needs in its quest to take on tough segment rivals like Porsche's Macan and BMW's X6. As before, smooth-shifting ZF eight-speed automatic transmission and AWD with so-called 'Intelligent Driveline Dynamics' are both mandatory across the range. Refinement's been improved by the introduction of a new Active Road Noise Cancellation system. Under the bonnet, there's been quite a bit of change with this revised model. Familiar from the original model is the base P250 petrol unit (249hp), while at the foot of the diesel range now lies the D200 (204hp). Beyond that, the straight-six cylinder options feature the brand's latest mild hybrid 48V technology, the choice being between the P400 petrol (400hp) and the D300 diesel (300hp). This Velar is also now offered with the brand's plug-in hybrid powertrain, the new P400e variant offering a 300hp four cylinder petrol engine mated to a 105kW electric motor powered by a 17.1kWh lithium-ion battery. The resultant package puts out 404hp and 640Nm of torque, making 62mph possible from rest in just 5.1s. Plus there's a 33 mile driving range when fully charged. It's clear from the Velar's market positioning that it'll be used off road even less than other Range Rover models, but it still offers class-leading ground clearance of up to 251mm (213mm with coil springs), class-leading wading depth of up to 650mm (600mm with coil springs) and Land Rover's unmatched suite of traction technologies including optional 'Terrain Response 2' and 'All Terrain Progress Control' systems. 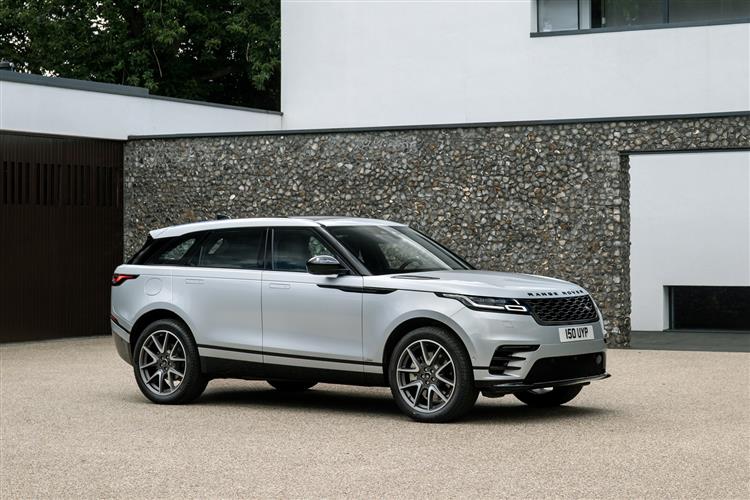