SHOCK AND MORE (some text hidden)

Although some eyes may be drawn to the Nissan GT-R's price creeping up, if anything the value proposition is now stronger than ever. With yet more dynamic ability, this improved, re-styled GT-R is fully prepared to face down the next generation of rivals who are only now responding to the shock of its original launch back in 2007.

The 'modern' Nissan GT-R legend began with 1989's multi-race winning R32, was bolstered by the N??rburgring-crushing R33 in 1995 and went stratospheric with the 1999 R34, hero of the Gran Turismo PlayStation game. Even so, few were prepared for the relentless annihilation of all rivals by the 2007-era GT-R. Here was a car that was offered for sale for less than £60,000 but which could make a £100,000 Porsche 911 Turbo appear out of sorts. Somewhat remarkably, the car's creator noted in 2007 that as jaw-dropping as that car was, the real deal would emerge gradually as the result of year-on-year iterations. The latest version has been re-fettled but its appeal remains much as before. Still the same somewhat brutal styling, still the same rumble of the 3.8-litre V6. So let's take a closer look.

We haven't yet had the chance to give the latest GT-R a thorough appraisal yet, but the somewhat unfathomable thought is that it could actually get much better than it already is. Even the original 479bhp GT-R was a car that, if you'd never driven one before, would blast your performance goalposts into the next postcode. The latest car's 3.8-litre 24-valve twin-turbocharged V6 engine these days offers 570PS and has been usefully improved in this latest model with new turbochargers for better low-end response. Gear shifts are also 0.15 seconds improved when in R-Mode. The electronically controlled suspension has been tuned to provide better cornering stability and a smoother ride. The steering is more linear and precise than ever, requiring minimal corrections at speeds of up to 186mph. A new brake booster increases the initial braking response by engaging with less pedal stroke, resulting in enhanced stopping power and feel. The exhaust manifolds, inspired by racing technology, have optimised turbo flange attachment points which allow for easier servicing without touching the exhaust manifold. There is also a new titanium exhaust muffler, featuring titanium finishers with burnished blue tips. Otherwise, it's as you were. The changes give even sharper acceleration in the mid to high-ranges (3,200rpm and above) and that engine has never sounded better, complemented by a 6-speed dual-clutch transmission features smooth shifts. The GT-R has always been regarded as one of the world's best handling machines and with this latest car, its cornering abilities should be even better. A rigid body structure and race-tuned suspension give confidence-building stability through quick lateral transitions and high overall cornering speeds. Providing the grip are sticky 20-inch tyres, wrapped around smart "20-spoke" machine-finished forged aluminum wheels. 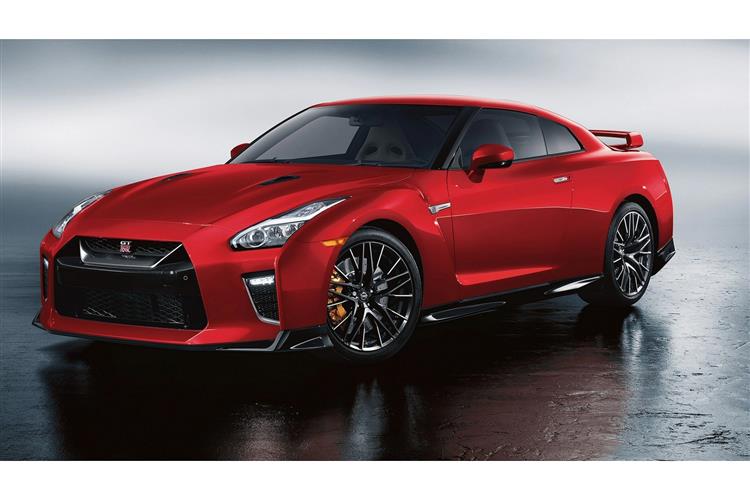