The Mercedes GLE Coupe is a luxury SUV Coupe that revels in its role as an opinion divider. Jonathan Crouch reports on the second generation model.

The Mercedes-Benz GLE Coupe is the three-pointed star's take on BMW's X6, a large luxury crossover that rides on SUV underpinnings but which features a coupe-like sloping roof. Whether you like this genre of car or not, it's hard not to be impressed by Mercedes' execution of the theme. It's a sportier, more stylish coupe-styled version of the GLE-Class five-door model and gains an added dash of maturity in this second generation form.

If something works, then you should first copy it, then improve upon it. Take the rather curious, contradictory idea of a luxury SUV Coupe. BMW introduced it with their X6 model in 2007 and sold so many that Mercedes couldn't help noticing the need for something similar, hence the introduction of the first generation GLE Coupe in 2014, then followed by the announcement of this second generation version five years later. If you'd like a sportscar but need a large SUV and want something that's fashion-conscious and stylish, this Mercedes aims to satisfy. It's certainly an arresting thing to look at, as extrovert, powerful and in-your-face as a car of this kind needs to be. Yet there is perhaps a dash of maturity here too that the rival BMW X6 maybe doesn't quite have. Enough to also perfectly position this GLE Coupe against upper-spec versions of other sportier contenders in the luxury SUV segment like Jaguar's F-PACE and Maserati's Levante.

There are two main GLE engine options to begin with and most buyers are likely to choose the base diesel derivative, a 400d 4MATIC variant that features a six cylinder diesel engine, which produces 330hp. If petrol power is of more interest, there's an alternative Mercedes-AMG GLE 53 4MATIC+ Coupe model with a stonking 435hp. This unit's enhanced by the Mercedes EQ Boost mild hybrid system, which uses a 48-volt onboard network with a belt-driven starter/alternator - the system adds 22hp to the car's overall output. This AMG '53' version can sprint from 0 to 62mph in just 5.3 seconds and has a top speed of 155mph. In all variants, power is transmitted via 9G-TRONIC automatic transmission. The broad ratio spread of gears allows for a clearly perceptible reduction in engine speed. Ride comfort and agility improvements are promised by the optional 48V E-ACTIVE BODY CONTROL suspension, which is combined with the optional AIRMATIC air suspension. This is the only system in the market where the spring and damping forces can be individually controlled at each wheel. This means that it not only counteracts body roll, but also pitching and squat. 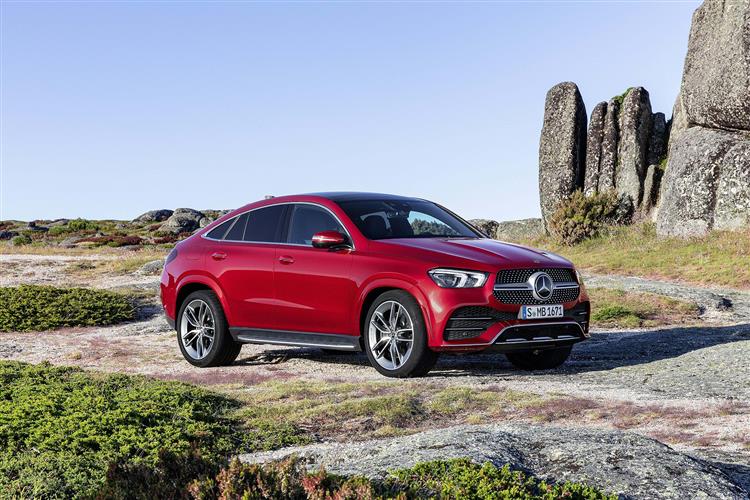