STEP IT UP (some text hidden)

This improved second generation Volvo XC90 aims to make the most of its sleek Swedish design values. Jonathan Crouch takes a look.

Volvo's second generation XC90 was worth the wait, a seven-seat luxury SUV that has given key rivals like Audi's Q7 and the Land Rover Discovery a lot to think about. Safe, efficient, clever, practical and stylish, it has re-established this Swedish maker as a credibly prestigious automotive brand. This revised version offers a slightly smarter look and some extra electrified tech. It's well worth a look.

The Volvo XC90 is just about the perfect example of a vehicle that created a niche for itself that no rival could seem to penetrate. If you wanted a 7-seat luxury 4x4 that was never really a sports utility vehicle, that was supremely comfortable and, above all, was neither shouty like a German nor trying too hard to fit in with the country set like a Land Rover, it was plum perfect. Nothing even got close. Because of this, the first generation XC90 hung around for ages. After all, why mess with a winning formula? Later versions, sold right up to 2014, tidied up the basic formula but were otherwise much the same as the models that first rolled into dealers in 2002. That's one heck of an innings. At least though, it paved the way for something different. There was no way that the second generation XC90 would be a mere 'evolutionary' design. Even so, few were ready for quite the radical change Volvo's Chinese owners Zhejiang Geely have funded. The low-key approach of old? It's fair to say that has been usurped by a much more extrovert look.

The key news with this revised MK2 XC90 model lies in the introduction of an advanced kinetic energy-recovery braking system, which is coupled with the company's existing 2.0-litre internal combustion engines to create a integrated electrified mild hybrid powertrain, identifiable by the brand's latest 'B' badging. Otherwise, things are much as before. The car sits on Volvo's light, stiff 'Scalable Product Architecture' (SPA) platform. Most customers choose the 235hp B5 mild hybrid diesel but there are also two mild hybrid petrol models too, the 250hp B5 and the 300hp B6. The other option is the Recharge T8 petrol/electric plug-in hybrid model, billed as 'the world's most powerful and cleanest large SUV'. This delivers a combined 386hp output, with a thumping 640Nm of torque. 62mph from rest is dispatchd in just 5.8s, yet this car can also give you 26 miles of pure electric driving range when fully charged. All the engines drive all four wheels via an eight-speed automatic transmission. Across the range, there's the option of an 'Active Four-C Chassis' package, which gives you four-corner adaptive dampers and electronic air suspension. Handling strikes a good balance between comfort and agility; cruising refinement meets the required executive standard; and there's the potential for a mild amount of off road prowess. A standard 'Pilot Assist' system offers a degree of highway-orientated autonomous driving technology. And you might be interested to know that conventional variants can tow up to 2,700kgs. 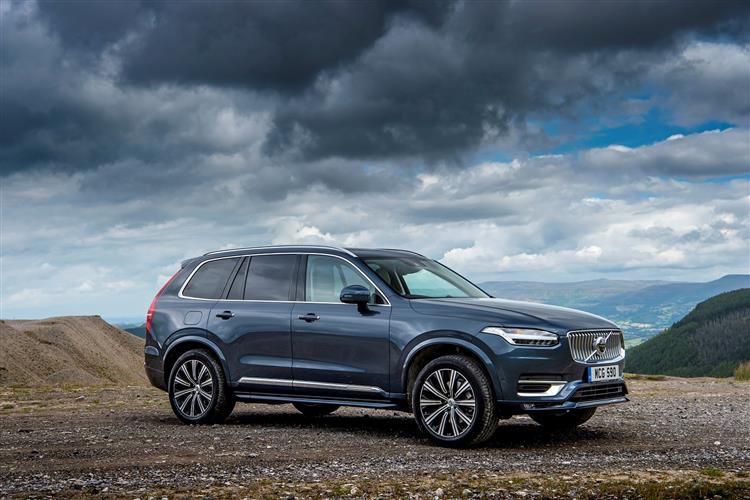