THE BRITISH OPEN (some text hidden)

For many, the third generation Bentley Continental GT Convertible will be the ultimate expression of convertible motoring. Jonathan Crouch takes a look.

Looking for the ultimate convertible car? The third generation Bentley Continental GT Convertible can't be too far from it, a seductive combination of power, style and craftsmanship. Bentley has been making iconic open tourers for around a century, some built to achieve success at Le Mans and Brooklands, others to convey their glamorous owners to the resorts of Monte Carlo and Cannes. All have been memorable but in truth, none has been truly sporting in the supercar sense. Until now perhaps.

Has the market ever been offered a proper four-seat luxury convertible supercar? I'd argue not. Yes, there are supercar drop-tops with cramped rear seats good for little but designer shopping bags. And, at the other extreme, huge leather-lined four-seater cabrios with lumbering luxury powerplants. But nothing that really combines that Ferrari feeling with space enough to share it en famille. In its first two generations of life, this car, the Bentley Continental GT Convertible, arguably got the closest to achieving this, but at heart, it was still more a Grand Tourer than a great sports car. Here though, we're going to look at the MK3 model, an open-topped Bentley that, we're told, now has the drive to delight Ferrari folk, yet manages to combine that with the space and rare refinement of an open-topped Rolls Royce. It promises a blend of trans-continental pace, dynamic drive and luxurious comfort that very few other vehicles can match. In prospect then, a very special car indeed.

As with the Coupe version of this car, there's a choice of either 542bhp 4.0-litre V8 power or a 626bhp 6.0-litre W12 TSI engine and either way, we're promised that the refinement served up on the move in this GT Convertible will be virtually the same as in the fixed-top model. 62mph from rest in the W12 takes just 3.7s, with the V8 just a couple of tenths behind. Of course, the under-bonnet engineering's the same as in the fixed top too. So instead of the old-school-style automatic gearbox fitted to the previous generation GTC, you get a modern twin clutch PDK transmission borrowed from Porsche's Panamera. In fact, much about this car is shared with the Panamera, including the new lighter, stiffer, stronger MSB platform, though in this case, it's 200mm shorter in keeping with this model's gentleman's sportscar remit. This chassis, Bentley hopes, will play a major part in making this second generation Conti GTC the rewarding driving machine its predecessor never truly was. That's not only because it's torsionally stiffer - though that obviously helps - but mainly because it supports an engineering format that sees the wheels pushed further forward and the engine moved rearward, so considerably improving weight distribution. Another key change lies with the introduction of a new all-wheel drive system. The old set-up featured a fixed 40:60 split between front and rear wheels and left the car understeering rather easily when you tried to push it along. In contrast, the new Active All-Wheel-Drive' package can constantly vary front-to-rear torque split depending on the driving situation and deliberately leaves the car using rear wheel drive as much as possible. As before, there's air suspension, now a three-chamber system that works in conjunction with the clever 48V electro-mechanical anti-roll bars first seen on the Bentayga. Suspension feel is one of the things you can influence via three provided driving modes - 'Sport', 'Comfort' and 'Bentley'. Steering feel and throttle response also get tweaked with the settings. 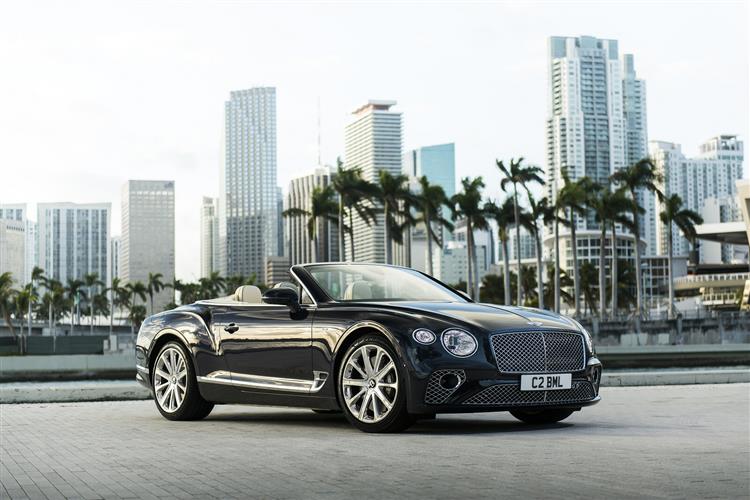