V FOR VICTORY? (some text hidden)

The Mercedes-Benz V-Class is one of the very biggest and plushest MPVs you can buy. As a people mover in the truest sense, it's only real competition comes from other large, van-based MPVs - or public transport. If you want to take up to eight people and their luggage in a vehicle that makes a very high quality statement, then it's a difficult option to ignore. Yes, it has commercial roots, but in this improved form, they're very well disguised, with both interior and exterior styling and finish having progressed considerably. If you want to carry seven or eight people and all their luggage - and do so with a bit of class, then this vehicle's worth a look.

There aren't many alternatives open to you if a really sizeable People Carrier is needed for up to eight people. And if that MPV must make a really sizeable statement of quality, the options reduce to just one: this Mercedes V-Class. Like its direct competitor, Volkswagen's Caravelle, the only way that this V-Class can offer up to eight seats and appreciably more space than is already available from cheaper Ford Galaxy or Volkswagen Sharan-class large People Carriers is to be van-based. In this case, on a Mercedes Vito. That might not be the biggest van that Stuttgart makes but it's quite large enough to create in the V-Class a very large MPV indeed. And a more sophisticated one these days that boasts sharper looks and more frugal engines that promise lower running costs. So how does it all stack up? Let's find out.

The key change made to this revised V-Class model is the switch beneath the bonnet from the aging 'OM651-series' 2.1-litre diesel to the much more up-to-date 'OM654-series' 2.0-litre diesel that already features across most of the rest of the Mercedes line-up. There's also a fresh gearbox across the range, as the old seven-speed transmission is replaced by a nine-speed automatic. The 2.0-litre, four-cylinder powerplant is offered in a couple of states of tune. The V250d has 188hp and 440Nm of torque - which is enough for a 0-62mph time of 9.5 seconds and a top speed of 127mph. The more potent V300d has 236hp and 500Nm of torque, although it can deliver 30Nm of 'over-torque' beyond this figure for short periods; it can manage the 0-62mph dash in 7.9 seconds and goes on to a top speed of 137mph. In our market, we can't have the four-wheel-drive variants on offer in mainland Europe. But Mercedes has tried hard to optimise the ride and handling package that its biggest People Carrier can offer. Hence the standard 'Agility Select' system that allows you to tweak throttle response, gearchange timings and feedback from the 'Direct Steer' speed-sensitive steering to suit the way you want your V-Class to respond. Plus there's 'Agility Control' adaptive suspension, a set-up able to tweak the damping to suit road conditions. Ultimately, all these efforts aren't really enough to make the dynamic experience on offer here in any way rewarding, but the overall compromise is decently impressive by the moderate standards of the super-sized MPV class. 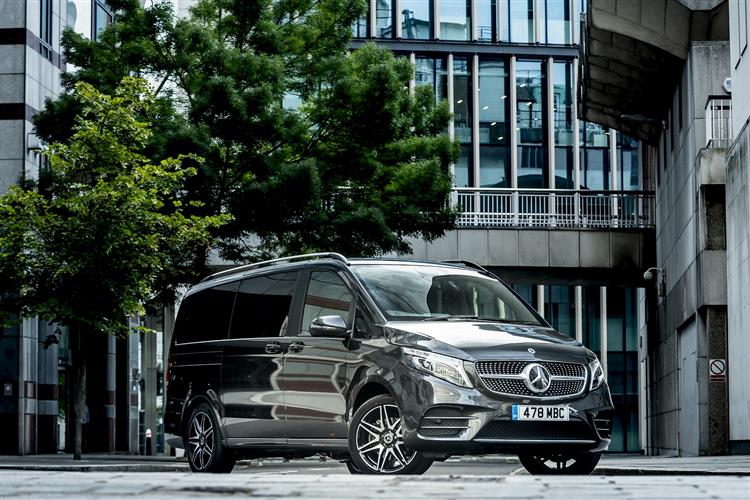