BACK IN THE GAME (some text hidden)

Alfa Romeo has long been a brand of unfulfilled promise. With the 4C it gets right back on track. Jonathan Crouch reports.

A rear-wheel drive, mid-engined sports car based around a lightweight carbon fibre chassis? That'll be a McLaren or a Lamborghini, right? That's usually the case but Alfa's £45,000 4C sports coupe joins that club. With a turbocharged 1.7-litre engine behind the driver and a serious power to weight ratio, the good times look to be returning to Alfa Romeo.

Has there ever been a marque with more public good will but less ability to capitalise upon it than Alfa Romeo? How car enthusiasts have willed Alfa to at least get things part way right but instead have all too often been palmed off with prettified Fiats, second-rate dynamics and the clear imprimatur of accountants getting their way over engineers. There has been the odd highlight along the way but for an enthusiast marque, Alfa Romeo has all too often not just missed the bullseye, but studiously managed to miss the entire target. That era ended with the arrival of the 4C sports coupe. Here is a car that seemed to promise so much that most just prepared themselves for huge and crushing disappointment. The wonderful news for sports car lovers is that the 4C delivers on its promise. It's revolutionary in the way it brings all carbon-fibre chassis construction to a sensible price point. And it goes in a way that those who demeaned it as just a 1.7-litre four-cylinder auto would never believe.

One figure tells you a lot about the 4C's potential. Its power to weight ratio is 259bhp per tonne. That's right up there with powerhouses like the BMW M3 CSL, the Mitsubishi Lancer Evo FQ-400 and the Audi RS5. Heck, it even beats the Lamborghini Countach LP500S. All of that comes courtesy of an all-aluminium, direct-injection four-cylinder 1750cc turbocharged petrol engine that makes 240bhp and is assisted by the 4C's kerb weight of just 925kg. That's about the same as a Lotus Exige, so you know that this is quite a special beast. It gets to 62mph in 4.5 seconds, which takes a Cayman S's trousers down quite easily, drive being deployed via a six-speed dual-clutch automatic gearbox with paddle shifters. The gearchange is 30 per cent quicker in Dynamic or Race modes and the clever rev-matching ability of the engine ensures that shifts are quick and smooth without any unnecessary dramatics. There's a lot of performance but also more flexibility than you might expect from such a small engine, with its best work coming between 2,000 and 5,000rpm. The exhaust note has been tuned for a raucous effect and this combined with the wastegate sound effects means that you won't miss an approaching 4C. The steering is entirely unassisted. 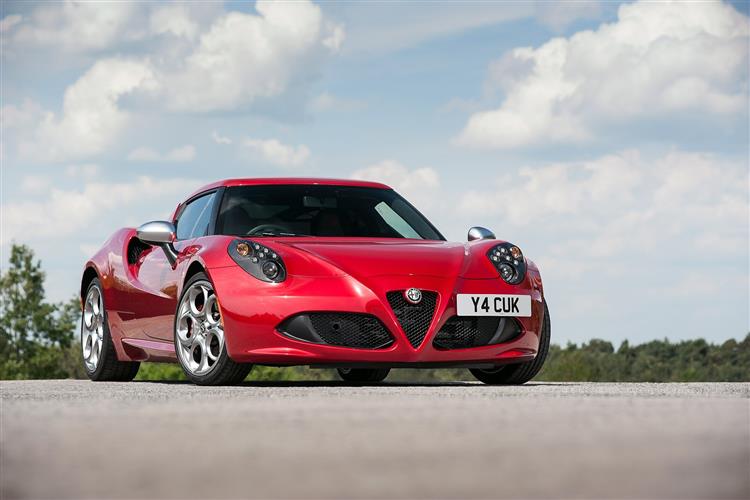