The hybrid IS 300h is Lexus' riposte to not having a diesel offering in the compact executive sector. It's quite an argument - as Jonathan Crouch reports.

The Lexus IS 300h is different. While the German marques play catch up with hybrid technology, Lexus is pushing the game forward with a car that has its own identity and is all the better for it. And did we mention 97g/km and 67.3mpg? Still want that diesel?

Almost everything about the Lexus IS is different from the norm in its chosen compact executive saloon segment. The styling, the single four-door bodystyle, the absence of manual transmission and, perhaps most notably, the fact that no, you can't have a diesel. Here instead, you get a unique four-door look, an auto gearbox and an overwhelming emphasis on petrol/electric hybrid power with its sensible running costs and limo-like silent start-up. It was a unique approach we nearly didn't get. Back when work on this design first started in 2008, the global recession was tempting Lexus back to the badge engineering of Toyota models, which would have made this a plushed-up Toyota Avensis. Thankfully, common sense prevailed and what we've ended up with is much more than that - a car to change your mind: about hybrid power, German brand domination - and Lexus itself. Let's try it.

The IS300h is the variant that attracts all the interest in the IS line-up. Unlike the brand's slightly smaller CT 200h hybrid model, it's more than a smartened up Toyota Prius, instead based on a proper large Lexus, the BMW 5 Series-sized GS 300h. True, the 2.5-litre engine used may only offer four cylinders but it does develop 178bhp, with a further slug of power contributed by an electric motor, resulting in a combined 223bhp output. That's enough to easily match the performance of the rival 2.0-litre diesel models at which this car is aimed, 0-62mph occupying 8.3s on the way to 124mph. Why just 124? It's down to use of a special geartrain for the electric motor that reduces weight and cuts friction in return for restricted flat-out pace - a reasonable trade off in our book. After all, when was the last time you drove quicker than 120mph? If you are going to be driving this car hard, then you'll find that the rubber belt-driven CVT 6-speed auto gearbox (installed because the ordinary IS250 model's conventional mechanical unit didn't fit) can start to frustrate attempts at meaningful progress. We've yet to drive a CVT auto that responded to the throttle (and in this case the gearshift paddles) in the way that it should - and here, the same issues remain. Plonk down your right foot and there's a noticeable pause before the transmission adjusts its gearing, after which there's another thrashy gap between the revs rising and the pace increasing. Still, you quickly adjust. 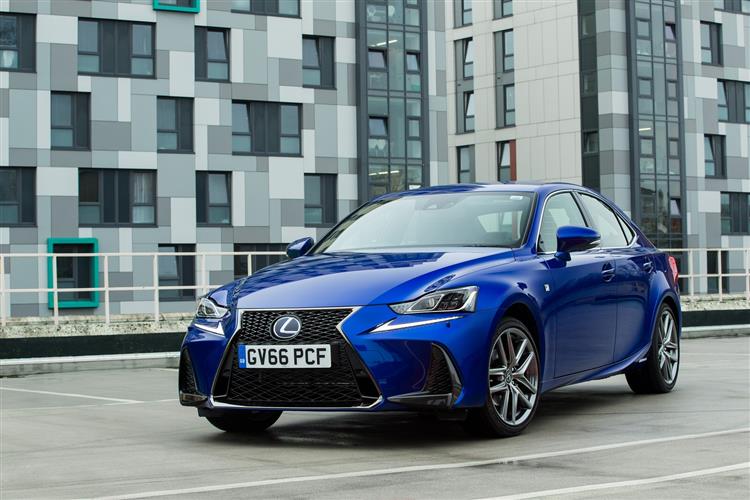