The third generation Lexus IS has its own take on compact executive saloon motoring. You might like it. Jonathan Crouch drives one.

The Lexus IS has a simple mission. It needs to be a car that you'd enjoy owning more than a Mercedes C Class, an Audi A4 or a BMW 3 series, the three leading choices in the compact executive saloon segment. Lexus used to simply try and copy these class leaders but with this third generation IS, they've been a bit cleverer, primarily through the offering of petrol/electric hybrid power rather than the kind of 2.0-litre diesel engine business buyers will be used to. It's a refreshing approach for people in search of something just that little bit different and its been lightly embellished since the introduction of this revised MK3 model.

Here's an interesting car, the Lexus IS. For many potential buyers, its main appeal lies not in what it is but in what it isn't. Namely a BMW, an Audi or a Mercedes, these being the three Teutonic heavyweight brands who dominate the compact executive saloon sector in which this Japanese contender competes. As a result, our company carparks are overflowing with 3 Series, A4 and C-Class models, with the cars in question nearly all powered by clattery diesel engines and mainly driven via the kind of over-firm sporty set-ups that the magazines insist buyers should have. If though, you're fed with these predictable choices and want something that reinterprets what a car of this kind should be, then this, I'd suggest, is where you need to start your search. Almost everything about this IS is different from the norm in its chosen segment. The styling, the single saloon bodystyle, absence of manual transmission and, perhaps most notably, the fact that no, you can't have a diesel. Here instead, you get a unique four-door look, an auto gearbox and an overwhelming emphasis on petrol/electric hybrid power with its sensible running costs and limo-like silent start-up. The result should be a car to change your mind: about hybrid power, German brand domination - and Lexus itself. Let's try it.

Back in 2018, Lexus made small changes to both the steering and the suspension of this improved model in an attempt to create a more dynamic feel. Under the bonnet, there's no longer a conventional petrol engine offering, so IS buyers are limited to the 2.5-litre IS 300h petrol/electric hybrid. Unlike the brand's slightly smaller CT 200h hybrid model, it's more than a smartened up Toyota Prius, instead based on a proper large Lexus, the BMW 5 Series-sized ES 300h. True, the 2.5-litre engine used may only offer four cylinders, but it does develop 178bhp, with a further slug of power contributed by an electric motor, resulting in a combined 223bhp output. That's enough to easily match the performance of the rival 2.0-litre diesel models at which this car is aimed, 0-62mph occupying 8.3s on the way to 124mph. You access that performance via a thrashy, rubber belt-driven CVT auto gearbox which doesn't help this car's sports saloon aspirations. On the plus side, the handling changes make the car feel sharper than before into corners, the steering's much better and you get a 'Drive Mode Select' system that allows you to tweak engine output, throttle response, gearshift times and even the air conditioning to suit four different driving modes. Plus there's an electric-only EV setting on the hybrid so that you can trickle along on battery power for short distances. 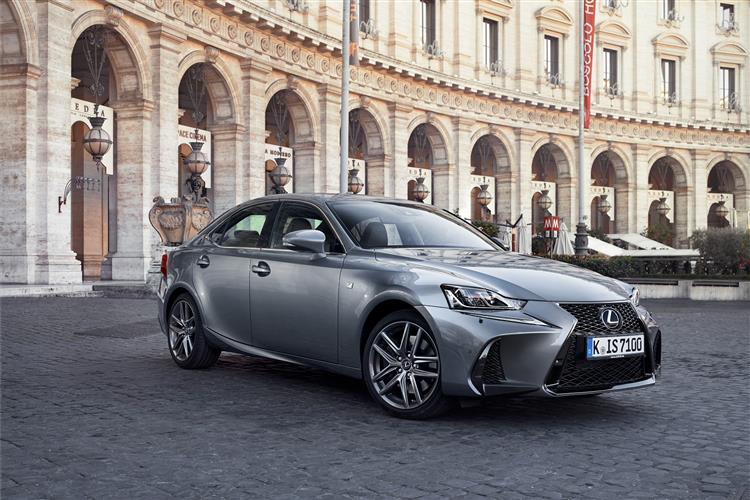