THE BIGGER PIC (some text hidden)

Kia's Picanto has earned a reputation as a no frills city scoot but this improved version of the third generation model feels a far better finished item. Jonathan Crouch reports.

In third generation form, Kia's Picanto is a little citycar that's big in importance for its Korean maker. This improved version is stylish, frugal and practical, it may just redefine the way many people think about this smallest category of car.

Here's how we used to understand small car categorisation and the difference between Fiesta-sized superminis and their smaller, cheaper citycar counterparts. You paid extra for a supermini because it was slightly bigger, because it was better finished and more stylish and because it had more refined engines that made possible longer journeys. So where does that kind of thinking leave us with a product like this, the improved version of the third generation Kia Picanto? It competes with the kinds of models we'd see as citycars, yet like many of them now, it boasts the kind of interior space a supposedly bigger Fiesta or a Corsa had until quite recently. It's very nicely built and acceptably stylish. And yes, it's quite at home attempting longer journeys. Here is the citycar, all grown-up. Where that leaves today's supermini sector is something we don't have to worry about here. Suffice it to say that most of what you'd pay up to £18,000 or more for in that class of car is delivered by this Kia. Other urban runabouts that have previously advanced that argument have either been expensive and/or three-door only, like say a Fiat 500, or have felt too cheap and noisy to really justify themselves as only-car transport, like a Suzuki Ignis or, I suppose, a Hyundai i10. I mention the Hyundai because that essentially is what this Picanto is underneath. Kia has used the underpinnings from this best-selling design, then refined them, improved the build quality and added a sharp new suit of clothes on top. On paper, a pretty effective route to creating a class-leading contender. Let's see if it's worked.

Kia hasn't added its latest mild hybrid tech into the Picanto's engine range, but it has introduced its latest 'Smartstream' technology to improve efficiency. There's now a choice of two 1.0-litre three cylinder units (the previous 1.25-litre 83bhp powerplant having been deleted). Things kick off with a normally aspirated 67PS unit. But ideally, you'd want the 1.0-litre T-GDI (turbocharged gasoline direct injection) 100PS power unit borrowed from the larger Rio supermini. Both engines are paired with a five-speed manual transmission, delivering power to the front wheels. As an option, Kia is offering a new Automated Manual Transmission (AMT) gearbox. The AMT set-up is based around a five-speed manual transmission with clutch and gear shift actuators to automate clutch operation and gear shifts. Basically, there's the ease-of-use of an automatic transmission, without sacrificing the fuel efficiency of a conventional manual gearbox. On the move, pretty much everything is as before. Refinement continues to be well controlled for a citycar - indeed Kia says the Picanto offers the quietest cabin of any A-segment model, both at idle and at a steady cruise. The handling's stable too, though obviously, this isn't the kind of car you'd choose for dynamic enjoyment. The Picanto's dinky dimensions also enable the pitch centre of the car to be placed further towards the rear, helping to naturally reduce 'nose dive' under braking without firming up the suspension and potentially compromising ride comfort. 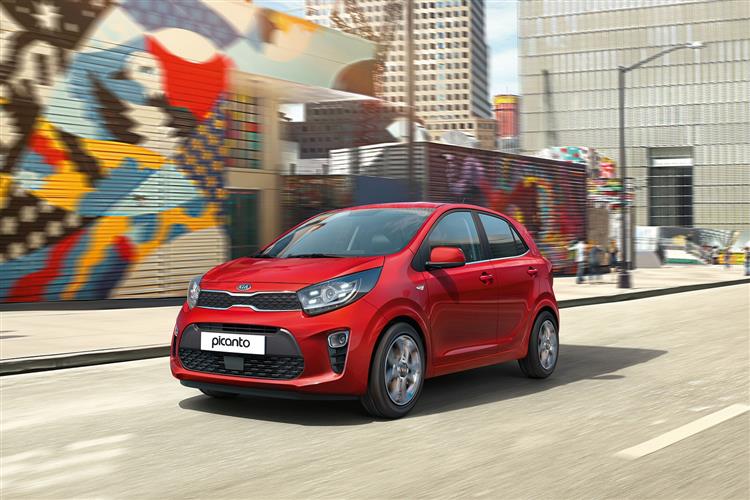