Is it a car, a quadricycle or a glorified go-kart? Who cares? Jonathan Crouch loves the Renault Twizy, a model that makes most sense in entry-level Expression form

The Renault Twizy represents a fresh direction in electric vehicle development. With a sixty mile range and a 47mph top speed coupled with a three and a half hour recharge time, the Spanish-built Twizy looks ideal for urban commuters with a garage in which to recharge overnight. With prices starting at way below £7,000 for the entry-level Expression variant we look at here (excluding battery lease charges) it looks strong value too.

Although it's premature to say that the electric vehicle has come of age, there's one branch of the EV family that seems a good deal further along its evolutionary path. It's the lightweight urban-specific vehicle and none represents the current state of the art better than Renault's Twizy. The reason? It's not even pretending to be a conventional car. Whereas many manufacturers start with a supermini, tear the engine out and try to find a home for batteries and such like, Renault has approached the genre with a clean sheet of paper. The Twizy seats two, is built light and can slot through gaps only a tad broader than a motorcycle with panniers. In other words, it's ineffably fit for purpose. You can buy glorified well specified versions, but for us, this is a model that makes most sense in its most affordable 'Expression'-trimmed form.

Looking nothing like a car means that you approach the Twizy unburdened by expectations for it to drive like a car and it doesn't disappoint. Yes, it has a steering wheel, a windscreen and fore-aft seating but that's about as far as the similarities go. Unless you specify them as options, the Twizy has no doors so you can see the tarmac whizzing past, adding to the sensation of speed. You'll also see the front wheels turning and you'll get the wind in your hair. A bit. Motive power comes courtesy of a 20bhp electric motor that drives the rear wheels and is mounted under the rear passenger seat. Fully charging the battery from empty takes three and a half hours, after which the Twizy is claimed to run for up to 72 miles, depending on how enthusiastically you choose the pedal the thing. Renault quotes a top speed of 47mph which is more than enough for urban use but a couple of colleagues have seen better than 50mph. Unlike some electric vehicles that are spookily silent, the Twizy has a bit of motor whine but it's nothing too intrusive. 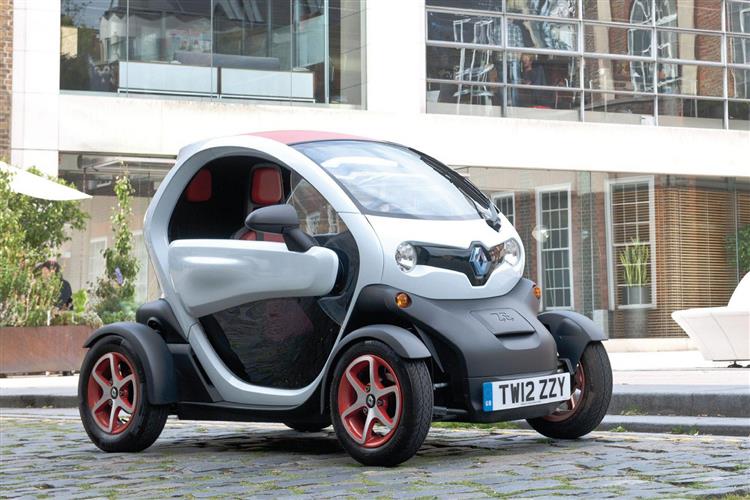