The pick-up market has doubled in size and become far more competitive since we saw the last version of Isuzu's D-Max back in 2012. Hence the need for this redesigned tougher, lighter, more sophisticated third generation version which, as before, will be as capable in the Serengeti as it is in Surbiton. It's still the pick-up you'd choose if you want one not afraid to put a bit of serious dirt beneath its wheels. But it's a bit more at home in Surbiton now as well.

Mazda no longer sells a pick-up truck in the UK but that Japanese maker has had quite a hand in this one, the third generation version of the Isuzu D-Max. It's the first time these two brands have collaborated together and the partnership seems to make a lot of sense. Isuzu can deliver the rough, tough practical design that pick-up folk need; Mazda can imbue that product with the smarter, more car-like cabin and better tarmac drive dynamics that most of them want. It's taken some time for this model to appear in our market. It's been on sale in Thailand (where it's built) since October 2019. Loyal D-Max customers here though, should feel it's been worth the wait. And here, we're going to find out more.

As before, there's a 1.9-litre four cylinder diesel engine beneath the bonnet; European markets don't get the 3.0-litre powerplant sold in other markets. Still, the 1.9-litre unit's 148bhp and 360Nm of torque should be sufficient for most D-Max customers. As before, both manual and automatic transmissions are available, Isuzu having re-fettled both gearboxes to allow for smoother changes. There's a 6-speed stick shift or a new Rev Tronic 6-speed auto. Plenty of work's gone in to make this pick-up better off road than its predecessor. For really gnarly stuff, there's now a diff lock fitted to 'DL20', 'DL40' and top 'V-Cross' models, a feature absent from Isuzu pick-ups since the old Rodeo model finished production in 2012. Plus there's a shift-on-the-fly system, which makes it easier to shift between 2WD and 4WD. The tough ladder chassis has been strengthened thanks to larger rails and an extra panel has been added to provide more extensive underbody protection. In addition, the water fording depth has been increased to 800mm. The 3.5-tonne towing capacity remains the same as the previous model. On tarmac surfaces, Isuzu claims a big reduction in noise, vibration and harshness compared to the old second generation D-Max. The new speed-sensitive electronic power steering system will help here too, improving manoeuvrability and accuracy. 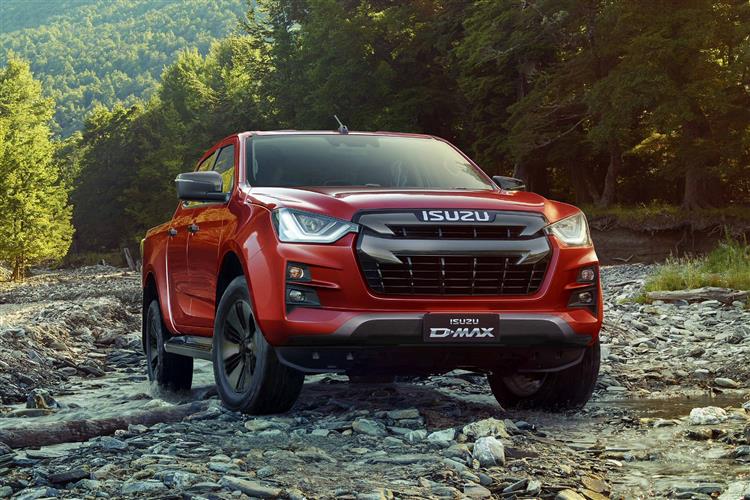