Fiat's Panda aims at being all the car some buyers will ever need. It's large where it matters, yet still small enough for its urban purpose. It's more efficient - especially in its latest 1.0-litre mild hybrid form - yet can offer surprising reserves of performance. And you can make it high-tech - or specify one that's super-affordable. The Italians have always done this kind of thing very well. They still do.

Almost every car you can think of on the market can be pigeonholed into a specific market segment. And even if it can't be, it's likely to appeal to a very specific group of customers. The Fiat Panda's different. Though sized and priced as a little citycar, it's so versatile and class-less that it can really function as.... well, almost anything you want. Depending on the flavour you choose, it's a design as suited to city living as it is to the needs of a mountaintop farmer. It can be a hot hatch - or eco-conscious transport for Friends of the Earth. It can be a second vehicle for older empty-nesters. Or the sole car for a rural family. Less a citycar. More an 'essential' car, it is, in the words of one top Fiat executive 'the official car for doing whatever the hell you like'. This is the Italian brand at its very best. A modern-era MK2 Panda design was launched back in 2003 to replace a first generation model that sold for over twenty years from 1980. The MK3 design we've got here was originally launched back in 2011, but in early 2020 was significantly updated with the option of 1.0-litre mild hybrid power; it's this improved Panda that we're going to take a look at here. Functional, solid, intelligent and free spirited, it's still, we're told, a car that thinks outside the box. Let's try it.

There are three main engine choices for Panda people, an entry-level 69bhp petrol 1.2-litre unit for the standard models and a 70hp 1.0-litre mild hybrid three cylinder engine for mainstream 'Cross' variants. Standard and 'Cross' versions of the top 4x4 derivative continue with the brand's two cylinder 85hp TwinAir petrol unit. Going forward, Fiat expects the majority of sales to be of the mild hybrid powerplant, which improves fuel efficiency without impeding performance. It also ensures a very high standard of driving comfort thanks to a 12-volt 'BSG' 'Belt-integrated Starter Generator', allowing for a quiet, vibration-free restart of the internal combustion engine in Stop&Start mode. The engine (which we've already seen in Fiat's alternative citycar, the 500) puts out 92Nm of pulling power and works via a 6-speed manual gearbox inegrated with that 'BSG' set-up we just mentioned. The 'BSG' system is mounted directly on the engine and is operated by the belt that also drives the auxiliaries. The new system also involves lowering the entire power unit 45mm so the car behaves better on the road thanks to the lower centre of gravity. Like any other Panda, this one's especially at home in a city environment. True, the five-speed gearbox could be a little more precise, but you'll appreciate the way this car takes even quite nasty small urban bumps in its stride. And delivers neat little touches like the steering's 'City' mode option to increase the assistance it gives at parking speeds so that you can use the tight 9.3m turning circle more easily. Urban-friendly through and through you see. 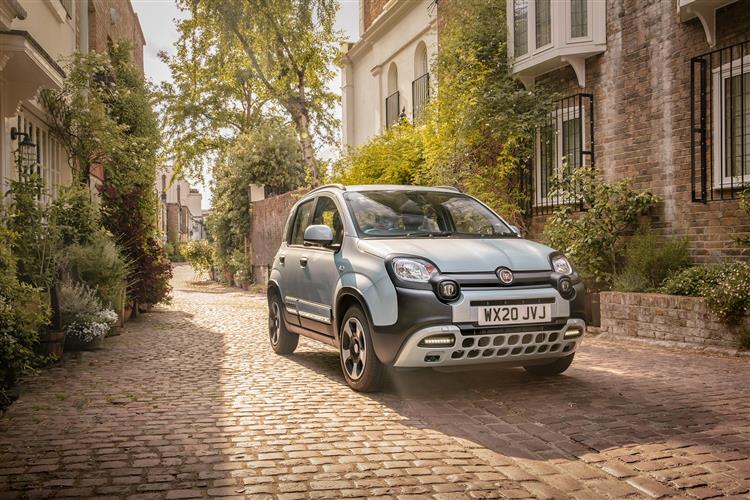