A Vauxhall Insignia isn't a car that I would ever have previously considered as a private purchase. This was a fleet rep mobile, something that I'd have been stuck with if I'd worked for a photocopying sales company. Getting away from that kind of image has to be something of a challenge but with this car in its latest Grand Sport form, I reckon that Vauxhall have managed it. To be honest, I was pretty shocked when this much improved Insignia rolled up on my driveway: it's now arguably the best looking of all the 'C'-sector Mondeo-sized cars - at least the volume brand ones. It also demonstrates just how far Vauxhall design has come in the last few years. First the ADAM lifestyle citycar. Then the swoopy Cascada convertible. Now this: all great-looking cars by anybody's standards.

So, it looks good, whether you order it in five-door Grand Sport form or in Sport Tourer estate or 'Country Tourer' estate guises. The five-door hatch version has a bowed roofline which drops dramatically towards the rear and, perhaps the Insignia's signature stylistic device, the "blade" feature that's cutaway behind the front wheelarches. In profile, you better appreciate the changes made to the size of this car, a 55mm increase in length enough to take this Vauxhall from being one of the smaller offerings in the D-segment to being the very largest car of this kind you can now choose. The biggest change existing Insignia customers will see when they sit in the car is a completely re-designed centre console and instrument cluster. The centre console has been simplified and now has fewer buttons for more intuitive operation of common functions, such as air conditioning and infotainment, while the instrument cluster has new dials and a cleaner look. Vauxhall has worked at improving the perceived materials quality and offers better grades of leather and cloth as well as enhancing the look and feel of dashboard materials and door trims. Still, I've tried plenty of cars that were good-looking inside and out but fell down majorly when it came to practicality. This one though, should suit most family buyers, even though luggage space has fallen a little over the previous model - to 490-litres in the five-door Grand Sport version I tried, with the cargo area extendable to 1,450-litres by flattening the split-folding seats. In the Sport Tourer estate, that total rises to 1,665-litres.

Motoring journalists might tell you that this car isn't quite as sharp as a Ford Mondeo but most actual owners probably won't notice a difference which is pretty slight anyway and primarily centers on a slightly vague steering response. Anyway, the Insignia holds an advantage when it comes to the more important issue of ride comfort and there are all manner of hi-tech handling solutions to counter Ford's justified hold on budding Lewis Hamiltons. As for engines, well most buyers will continue to want a diesel, with the majority of sales likely to go to the 1.6-litre Turbo D unit I tried, offered with either 110 or 136PS. It was the pokier variant that I tried, a car capable of 65.7mpg on the combined cycle and 114g/km of CO2. If you trade up to the 170PS 2.0-litre diesel, efficiency drops off markedly, though there's the compensation of 400Nm of pulling power, a figure that will be improved further if you go for the 210PS biturbo variant. Prefer petrol? Well small capacity turbocharged engines that use unleaded are very much in vogue at present and the 1.5-litre unit supplied here should suit that trend, offered with either 140 or 165PS. Further up the range sits a potent 260PS 2.0-litre petrol Turbo model that showcases both of what are arguably the two most significant engineering developments introduced with this second generation Insignia. One is the super-slick 8-speed auto gearbox that's optional on lesser models. The other is a sophisticated new intelligent all-wheel drive system that uses a state-of-the-art rear torque vectoring system for greater cornering traction and sharper turn-in.

Despite the fact that this Insignia has been pushed up-market, prices have been kept very competitive - and indeed have been sharpened so that they more accurately fit the latest 'BIK' 'Benefit-in-Kind' categories. In fact from launch, Vauxhall claimed that some versions of this MK model Insignia Grand Sport were up to £1,500 less expensive than their direct first generation predecessors. To be specific, we're talking about a range priced in the £17,000 to £28,000 bracket. Those really are very affordable figures for a car of this size. There's a £1,500 model-for-model premium to pay if you want the extra luggage space of the Sports Tourer estate variant, a bodystyle that's also available in raised 4x4 'Country Tourer' guise if you want an alternative to an SUV. This time round, there's no saloon Insignia variant. All models get alloy wheels, auto headlamps, keyless entry and usual executive niceties like air conditioning, heated mirrors, a leather-trimmed multi-function steering wheel and cruise control with a speed limiter. As for media connectivity, well as standard, there's an 'Intellilink' infotainment system that includes a seven-speaker DAB audio set-up and smartphone 'Projection' via either 'Apple CarPlay' or 'Android Auto'. All of this works via a colour centre-dash 'Intellilink' screen that's 7.0-inches in size and, as you'd expect, there's also the convenience of Bluetooth 'phone connectivity, a USB connection and an aux-in socket. But that's just the start of the media cleverness. My favourite feature, which is standard on every Insignia, is the 'OnStar' personal connectivity and service assistant package. Once you've used 'OnStar', you'll wonder how you managed without it: you'll never be stranded after a breakdown or an accident and almost anything you might ever need to know about any journey you ever take will be just a button press away. The 'OnStar' package also allows you to create in your car a 4G Wi-Fi hotspot, plus there's a smartphone app that can remotely lock or unlock the doors, check your oil life or, if you've lost this Vauxhall in a busy carpark, it can sound the horn or flash the lights. Plus if your Insignia is stolen, 'OnStar' can disable it so it can't be started. In summary, no other rival has a system that can match the range of services that 'OnStar' has to offer. 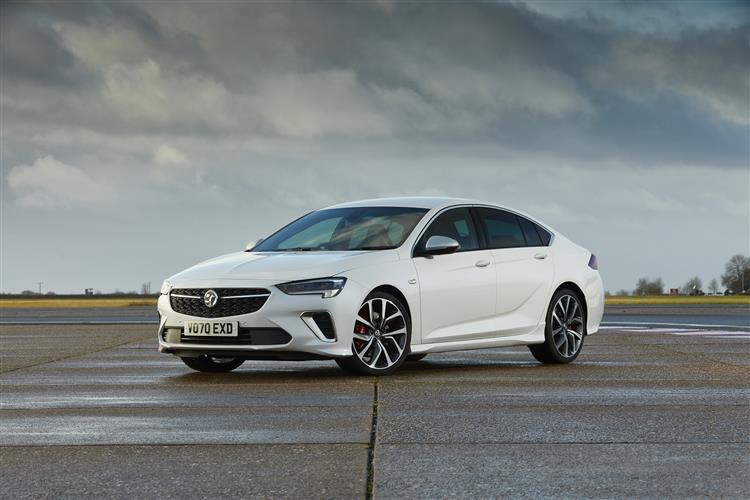