The Mercedes S-Class is the perfect tool making a big impression, as June Neary discovers

Will It Suit Me?word count: 80

There's something rather imperious about a Mercedes S-class. Whether it's the 'best car in the world' or not, it's a vehicle that demands a certain respect. It's also a vehicle that demands at least 5125mm of parking space even in standard wheelbase form, something my driveway signally failed to yield. With its elegantly proportioned rump jutting into the pavement, I had to conclude that the S-class might have been a little too much car for me and my modest mortgage.

Everything about the S-class betrays a quite worrying attention to detail. The COMAND (Cockpit Management and Navigation Display) system is standard in all S-Class models and allows you to control all manner of functions. It's not as complicated as the iDrive system that BMW persists with in its 7 Series but it's still enough to reduce me to consulting the manual. This tome is thicker than my local Yellow Pages and I soon gave up. Mercedes claims the seats of this S-class have been redesigned to make them a little softer, spoiling a long-standing Mercedes tradition of rock-hard seating. It was always most entertaining to see somebody who'd never travelled in a Mercedes before to leap into the seat and then have that shocked expression akin to that worn by people who've just stepped off an unseen kerb. It seems Mercedes have now figured out how to make seats that are softer but still orthopaedically supportive. A fresh optional feature developed for this revised model that Mercedes is especially proud of is the 'Energizing Comfort' package. This is billed as a one-touch route to complete interior serenity, co-ordinating the climate control, fragrance dispenser, music and interior lighting with seat heating, cooling and massage into six pre-set programmes, each configured to an appropriately soothing soundtrack. Stressed CEOs will love it. There's ample room for five and the 510-litre boot is large enough to qualify as an attractive bijou starter home if you were to park the S350d I tried in SW3. If you want even more room in the back, Mercedes will even sell you a long wheelbase version. After witnessing the inadequacies of my driveway, I'm glad I didn't opt for this when I selected my test car.

The improved S350d model is a far more satisfying proposition than its precedessor when you get comfortable behind the wheel. With 286bhp on tap, this car will sprint to 60mph in 6.0 seconds and continue right through to 155mph. Despite this increase in available performance, the S350d is actually still pretty frugal, returning a creditable average of around 50mpg. Mercedes have even managed to clean up its act on emissions a little, the S350d emitting 139grammes of carbon dioxide per kilometre. That still doesn't make it 'Herr Grun' in my book, but it's better than many of its rivals. The interior is a little brighter than S-class models of yore with revised switches and an exclusive range of materials and trim options. My car was equipped with the optional 'Driving Assistance Plus package', a box you'll almost certainly want to tick because without it, you won't be able to use any of the autonomous driving technology that's been built into this improved S-Class model. That's been usefully improved over the 'Drive Pilot' autonomous system originally introduced in the mid-sized E-Class range so that this S-Class can now able to drive itself on a much greater variety of roads with no driver input, save for a brief touch on the steering wheel every few seconds so you can reassure the electronics that you're still awake. The main enhancements are based around the way that radar feedback has now been combined with sat nav data so that the car knows in advance to slow for corners and roundabouts and it can automatically brake itself to a halt for, say, a toll booth or T-junction. Mercedes calls this 'Route-based speed adaptation'. Very clever.

Prices for mainstream S-Class saloon models sit mainly in the £75,000 to £90,000 bracket, but of course, it's possible to pay a great deal more than that. The standard saloon comes in short wheelbase form if you choose the base S350d diesel variant, but most buyers will opt for it in the lengthened long wheelbase form I tried, which is the body shape you'll have to have if you go for any of the other standard model engines. Or indeed the Plug-in hybrid variant you can ask your dealer about. 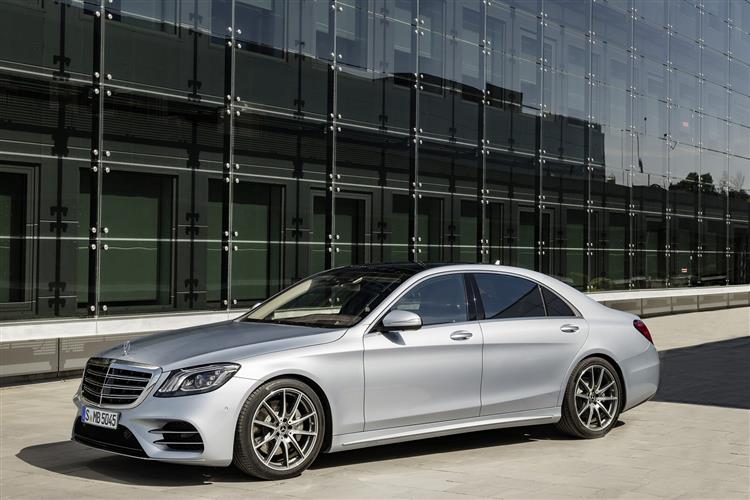