So you've got the Jimmy Choo kitten heels, the Prada handbag and the Harvey Nicks' store card. Fiona Leitch puts on her fake Gucci sunglasses and takes the ultimate accessory for a spin.

Will It Suit Me?word count: 70

What's sleek, sexy and guaranteed to turn heads? No, not me (though it's very kind of you to say so), it's the Mercedes SLK. It's also sure to inspire great swathes of envy amongst friends not wealthy enough to possess one or lucky enough to have a job like mine. If creating jealousy and being admired at the traffic lights is your thing, then this is the car for you.

A practical Mercedes sports car is something of an oxymoron. You won't be doing the school run or the weekly shop in this one, unless of course your idea of grocery shopping involves popping into the Harrods food hall. Better to keep it as a sporty runabout and general swank-mobile for the single girl-about-town or reserve it just for Mummy and Daddy when the kids are at their grandparents'. Being a two-seater there's not oodles of room inside; it feels compact rather than claustrophobic, although with a passenger you will probably want the top down. What am I saying? Owning one of these is all about having the top down - I'd only put the roof back up when absolutely forced to by monsoon-like weather. The 'accordion' roof is easily operated at the touch of a button, and it only takes twenty-five seconds for the two metal panels which make up the roof to fold back and down. This does however compress the boot space from a surprisingly large 12.3 cubic feet to a measly 5.1, so make sure it doesn't squish your Louis Vitton luggage. This car is all about style and the interior, clad in classy cream and black leather, is the automotive equivalent of the Chanel little black dress. The chrome-trimmed handles, instruments and gear stick give it a sporty feel, whilst the centre console is more straightforward than its rather technical appearance would suggest. With a 6 CD changer in the glove box there's not much room to put things, although the storage units down the centre of the car are big enough for CDs and a few other carefully chosen necessities. If you're that bothered about storage, buy a van.

Being a shallow sort of person, I'm easily impressed by good looks, which this little baby certainly has; but, as my old gran used to say, it's what's inside that counts. Luckily enough the SLK delivers here too. With a top speed of 144mph and acceleration from 0-60 in 7.6 seconds there's enough going on under the bonnet to keep any girl-about-town happy. Mercedes also claim that, with the stiffest bodyshell in its class, this is the safest car of its type. 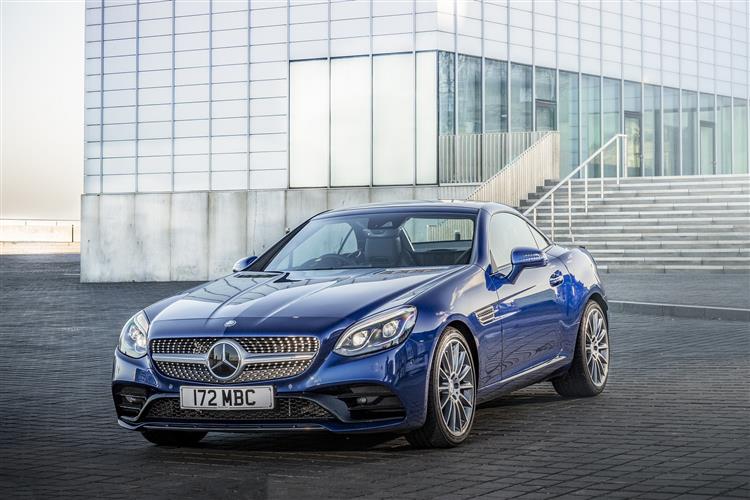