The F-PACE took Jaguar in a bold and different direction and was crucial to the brand's future as it tried to expand its sales and take on key premium rivals. It brought a well-judged compromise of class, performance and capability to the luxury mid-sized SUV segment and provided a tempting alternative to the established German players in this sector. In short, this car was well worth the wait. Here's how the earliest versions of this model stack up as a used buy.

If there's one type of car that epitomises this period in motoring history, it's the SUV. So many buyers desire them and back in 2016, Jaguar wanted a slice of this action. As a result, the British company finally brought us its first ever model of this kind, complete with high-riding driving position, four-wheel drive and even some decent off-road ability. That was the F-PACE. So why did it take so long for this British maker to enter a segment its German rivals had been dominating for decades? The answer probably lies in Jaguar's brand partnership with Land Rover and a management disinclination for the two marques to cross into each others' territories. But it was thinking that had to change - and did when this F-PACE finally hit the market in the Spring of 2016. Given the Jaguar Land Rover company background, you might quite understandably expect this to be little more than a re-badged Range Rover Sport beneath the skin - or if not that, perhaps a somewhat larger, more dynamic-looking take on a Discovery Sport, that car being slightly closer to this F-PACE's size and price. Refreshingly though, this model is neither of these things. In fact, it turned out to be resolutely different in its approach from anything Land Rover made, with underpinnings owing far more to Jaguar's XE and XF saloons, both of those cars having been engineered to accommodate 4WD. As a result, there was the potential for the kind of properly driver-orientated handling dynamics that a Jaguar SUV really ought to have. And which it needed to realise marketing ambitions that in price and performance saw tough and well established competitors being targeted. Lower range models were pitched against desirable versions of prestige-branded compact SUVs like BMW's X3 and Audi's Q5, while quicker F-PACE variants had to match up against the likes of benchmark performance models in this segment like Porsche's Macan and AMG versions of the Mercedes GLC. This F-PACE sold in its original form until late 2020, when a facelifted version arrived, complete with optional PHEV tech. It's the earlier-pre-facelift versions we look at here.

It says much that Jaguar chose to market this F-PACE as a 'sports car', albeit a very practical one. The stylish shape was pretty much exactly what we saw from the Coventry company's C-X17 prototype, a car unveiled back in 2013 at the Frankfurt Motorshow. In production form, the lines were just as eye-catching, Chief Stylist Ian Callum refusing to be constrained by the SUV sector's usual aesthetic design cues, instead delivering a much more dynamic silhouette, with a roofline lower and closer to the road than anything else in the segment. Time to take a seat inside and you can check out the so-called 'Sports Command' driving position. This delivers the kind of high-set authoritative seating placement that SUV drivers like so much, without perching you so far up that you lose the feel of being an integral part of the whole experience. It's a very well-judged compromise, positioning you perfectly for the kind of involving drive promised by the 'sports car' marketing rhetoric. The whole cabin ambience is designed to make anyone coming to this car fresh from one of Jaguar's saloons feel instantly at home, with the dials, the switchgear and the rising circular gear selector you get on automatic models all familiar fare. As usual in executive segment models, the centre of the fascia is dominated by a colour infotainment screen, this 8-inch 'InControl Touch' display being the same as that used across Jaguar and Land Rover's other more recent models. In the rear, once installed, two tall adults get more headroom than you might expect the raked-back roofline to be able to provide and there's reasonable standards of knee room too. The boot is accessed on all models via a powered tailgate. It rises to reveal one of the largest luggage compartments in the mid-sized SUV segment, offering a 650-litre capacity that's 100-litres bigger than you'd get in, say, a rival Mercedes GLC, a total bettered in the sector only by Land Rover's Discovery Sport. With all three rear seat segment portions dropped down, the floor isn't quite flat, but the 1,740-litre cargo capacity provided is impressively big for this class of car. 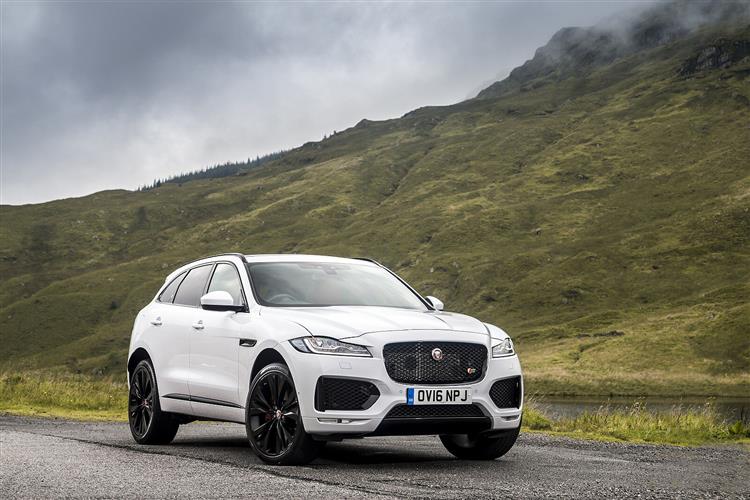