SMALL BUT ACTIVE (some text hidden)

The last version of the Ford KA+, sold between 2018 and early 2020, offered a crossover-themed 'Active' variant which offered a trendier take on citycar motoring. It aimed to appeal to people who wouldn't have considered the ordinary version - which of course was just the point. But does it make sense as a used buy?

Need a really small used citycar with an added dose of attitude? If so, here's one you might like - the Ford KA+ Active, sold between 2018 and early 2020. Remember the original Ford KA? If you do, you might recall that though small and cheap, it had character by the bucket load. Unfortunately, the same couldn't be said for the Polish-made second generation design - or the Indian-built KA+ model that replaced it in 2016. So Ford, in the Spring of 2018, moved to refresh the KA+ with a package of changes including the introduction of this 'SUV'-style KA+ 'Active' derivative. The idea of Crossover styling being applied to a little runabout isn't a new one but until a few years ago, it was a concept we only saw applied to superminis, not cars like this one competing in the smaller citycar sector. In 2017 though, we suddenly saw a number of jacked-up little city sector hatches launched with roughty-tufty styling and a more characterful attitude to life, the Fiat Panda Cross quickly followed by the Suzuki Ignis, the Kia Picanto X-Line and the Vauxhall Viva Rocks. These were the cars this KA+ Active competed against: like them, it obviously never quite had what it took to be a fully-fledged small SUV. For likely buyers, this won't matter one jot. People who would never have considered the KA+ in its unremarkable standard guise will be much happier with the car in this more extrovert form. They'll note that it offers class-leading standards of interior space and be keen to believe Ford when the company insists that this derivative's extra 23mm of ride height hasn't harmed this model's traditionally agile handling. This Active variant vanished from the price lists when the KA+ range was discontinued by Ford in early 2020.

There's no doubt that this KA+ Active model will stand out a little more than the standard version on the school run. Does it have the visual character of earlier KA designs? Possibly not. But it's more fashionable and will probably appeal to a wider audience than anything else from this model line. This variant gets a unique black finish for its upper and lower front grilles, plus a silvered lower skid plate. Inside, once you've stepped over the branded sill plates, you'll find yourself in a cabin that's been subtly tweaked over the one you'd get in a standard KA+. A 'Sienna Hazel'-coloured theme features in the seat fabric and the door trim inlays and there are all-weather rubber mats to protect the interior from muddy shoes and boots. This being a converted citycar, you won't be expecting a properly commanding SUV-style driving position - and, despite this lifestyle variant's 'Rough Road Suspension' package, you don't get it either. Mind you in our experience, a lot of small SUVs that are purpose-designed for the Crossover segment lack this too. Standard is a 6.5-inch 'SYNC 3' centre-dash infotainment screen which allows you to activate audio, 'phone or Mobile App options via either voice control or the touchscreen icons. You can't have navigation built into this package but you can stream a navigation app in from your 'phone thanks to this set-up's standard 'Apple CarPlay' and 'Android Auto' compatibility. Enough. Let's move to the area of this car that might really sell it to you - the back seat. This is where the above-average body length for the segment really pays off, providing for a wide door that makes this the easiest citycar in the class for rear passengers to get in and out of. And once inside? Well there's certainly not much to complain about for a model of this kind, unless you're irritated by the lack of things like grab handles, coat hooks and door pockets. We've certainly been in plenty of Fiesta-sized superminis from the next class up that feel more cramped than this KA+ model's cabin. That tall, glassy roofline certainly helps and there's enough legroom for two six-foot adults to sit behind two front-seated friends of similar size. As for the boot, well an immediate irritation is the lack of any sort of tailgate handle but with this facelifted model, you do at least get a button to release the tailgate latch - you can also use the button on the ignition key or the one provided on the dash. Once the tailgate's raised, the 270-litre space revealed is the largest in the citycar class. 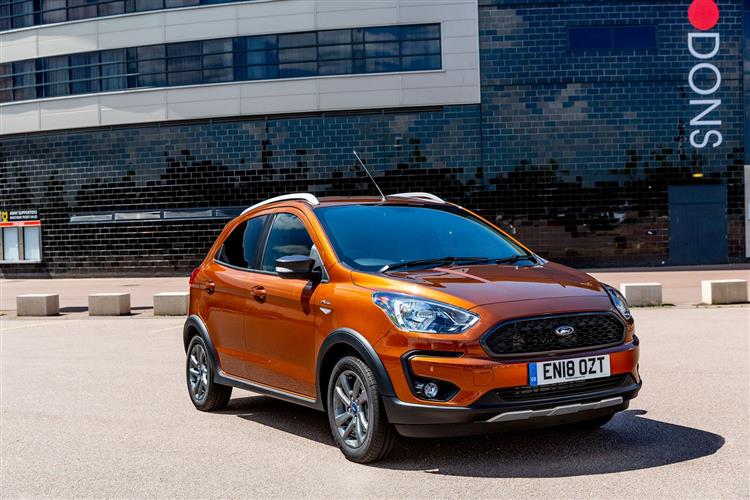