In 2011, once more, Volkswagen reinvented the Beetle. Bigger and more efficient than its predecessor, the 'A5'-series third generation version might not have looked quite so extrovert as its predecessors but it was a far better car. More importantly for its target market amongst retro rivals, it was also a more stylish one. Aesthetics matter. Go on. Live a beautiful life. Let's see how this model stacks up as a used buy.

As you'll probably already know, the Volkswagen Beetle model line comes with quite a history. If you're not familiar with that, then we'll need to turn the clock back for you to the early 1940s. To be quite frank, we don't have much to thank Adolf Hitler for, but his vision of what he called the KdF-Wagen ('KdF' means 'kraft durch freude', the old Nazi slogan 'strength through joy') - the German 'Peoples' Car' - certainly had something to be said for it. Later generations of buyers were to know that model much better by another name, the Volkswagen Beetle, and over 21 million examples had been sold worldwide by the time, in 1998, the German brand finally got round to bringing us a modern version. What was known then as the 'New Beetle' of course shared nothing apart from its iconic name and curvy shape with the first generation version. And quite right too. The crude, noisy and comfortless rear-engined air-cooled original was the last thing modern buyers were likely to want. Their idea of Beetle motoring was very different from that of the basic, functional transport envisioned by the original's creator, Dr Ferdinand Porsche. The New Beetle was less of a 'Peoples' Car' and more of a 'Peoples' Plaything', early US buyers including Beverly Hills celebrities, a president's daughter and exclusive car rental establishments. A million New Beetles were sold over thirteen years, 68,000 of them in the UK, but the modern take on this iconic design was never quite the success it might have been. The curvy Toytown looks and touches like the flower vase on the dash left it as an exclusively feminine and fashion-centric choice, buyers who quickly forsook its charms when at the turn of the century, the 'New MINI' and much later, the reinvented Fiat 500 came along. By 2011, Volkswagen wanted them back and aimed to achieve that with this third generation 'A5'-series model, a car that aesthetically at least, was much closer to the design of the original. Longer, wider and lower than its predecessor, It was intended to look more sporty, masculine and dynamic. And because the Golf underpinnings remained - this time more modern ones - it could be a more practical choice than its retro rivals. Add very competitive running costs, perky performance and a dash of hi-tech and you've a car that ought to have reignited the Beetle cult all over again. Strangely though, it didn't. A Convertible version was added to the range in 2013. The whole line-up was lightly facelifted in 2015 and a lifestyle-orientated 'Dune' version added to the range. Production finished in 2019 and the car was not replaced.

What You Getword count: 658

Looking back, the style of the second generation 1997-era 'New Beetle' didn't have much in common with the original. That car was defined by three semi-circles - front wing, rear wing and domed roof - which determined its cartoon-like look. This 2011-era 'A5'-series design dispensed with that geometry, based on larger, more modern Golf underpinnings. Not a good basis, you'd think, for trying to better replicate the 1940s original, but the design team resolved to try anyway. A post-war original version was parked in their office and the stylists were told to immerse themselves in Beetle memorabilia. And sure enough, something of a feel of Dr Ferdinand Porsche's early 'Peoples' Car' somehow made it through to this third generation model, most notably in the large wheels plumply positioned beneath the flared flowing arches and a rear C-pillar that follows the contours of the original design. So there's something of the past, artfully mixed with a sporty vision of the future. Really? A sporty-looking Beetle? It was quite a new concept for British buyers but not so for the American market this car was primarily aimed at. The US holds a strong historical Beetle-tuning culture and wanted potency rather than design pastiche when the time came for this MK3 model. They got it. Perhaps the most notably visual change in this respect was the lower roof that the larger floorplan enabled to be swept further back. At the front where the big circular headlamps were unique in the Volkswagen range from the period, there was a longer bonnet in front of a more steeply raked windscreen that was shifted further back. Overall, it was a cleaner, more self-confident lower profiled look that even had something of a touch of Porsche 911 about it. Moving inside this three-door-only body shape, you notice that the frameless doors open wide - but not so wide as to make ingress difficult in tight parking spaces. And at the wheel, you're seated behind a traditional upright dashboard with a set of three traditional dials visible through a sporty three-spoke thin-rimmed wheel. Unfortunately, the plastics are traditional too, so no Golf-like soft-touch surfaces. Still, the quality seems good even if the Mexican factory didn't seem to screw things together quite up to German-fabricated Golf standards. Still, the look and feel all seem to suit this car's retro vibe, especially with the body-coloured door sill and dash inserts you get on plusher models. And on that subject, other early Beetle touches include the upwards-opening glovebox, natty elastic straps instead of door pockets and the optional auxiliary instruments you can specify to sit above the infotainment controls. You'll look in vain for the MK2 Beetle's dash-mounted flower vase though. Good. Volkswagen claims that those confined to the two-seater bench at the back got a better deal than before, despite the lack of a roofline previously so high that wedding guests could wear their hats on the way to the ceremony. It was lower in this 'A5'-series model, but compensation was provided by the bigger floorplan's greater length and width, supposed to benefit both leg and elbow room. Fine in principle but in practice, the way the body tapers towards the rear makes this back seat a necessarily cosy place. It's fine though for kids - or adults on relatively short journeys. And miles better of course, than a MINI or a Fiat 500. Out back in the space where the original Beetle once had its air-cooled engine, this MK3 Beetle has a boot lid that swivels upwards - together with the rear windscreen - when opened, revealing 310-litres of cargo capacity, 50% more than the previous model. The sloped boot lid makes it awkward to carry taller items though. Push forward the 50:50 split-folding rear seat and the space on offer can increase to as much as 905-litres, which makes this by far the most practical of all the retro-style models on the market from this period. 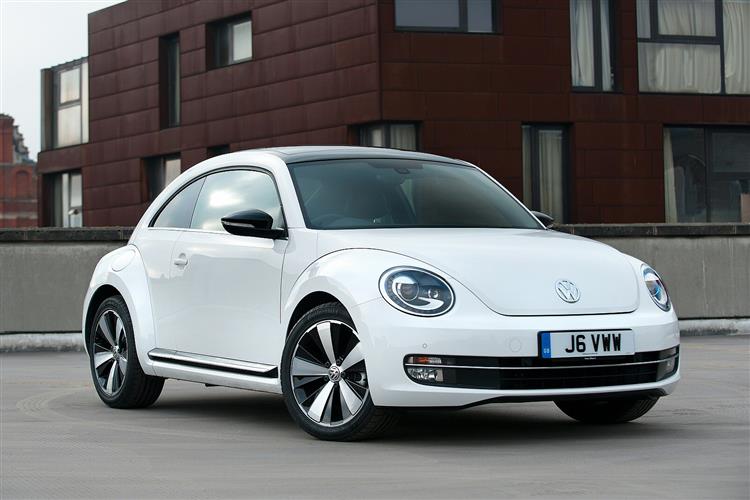