The name's certainly unusual - and so, for Vauxhall, was the approach with this unusual small car contender. Back in 2014 with this ADAM ROCKS AIR model, the brand brought us a car that didn't take itself too seriously - the perfect antidote perhaps, to an ordinary everyday supermini. With jacked-up body styling and a sliding soft top roof, this car tapped into the small Crossover market and was at its best in turbocharged 1.0-litre three-cylinder petrol guise. It's a rare but very interesting find for the fashion-orientated small car buyer that's worth seeking out.

Once you you've got a small, trendy little car, there are all kinds of ways you can develop it. Look, for example, at all the derivations we see of models like the MINI and the Fiat 500. Fashion, it seems, has many forms - and here's one of them. The ADAM was the car that in 2013 launched Vauxhall into competition with models like the two we've just mentioned. In the ADAM's trendy 'ROCKS' and 'ROCKS AIR' guises, launched in 2014, the plan was to broaden its appeal. By this period, the MINI and the Fiat 500 had already shown how the basic concept for a stylish urban runabout of this kind could be adapted to create either a convertible or a small 'SUV'-style Crossover. In 'ROCKS' the ADAM became slightly SUV-like and in 'ROCKS AIR' guise, it ambitiously aimed to combine both the Crossover and Convertible genres in one stylish little package. Since, back in 2014, there had never been anything quite like this before, Vauxhall coined a new name for the niche it then believed this car represented - that of the 'CUV' - or 'Compact Utility Vehicle'. In both its guises, the ADAM ROCKS was aimed at trendy folk needing a small car but not wanting a boring supermini. People finding it difficult to choose between a fashion-conscious MINI-style runabout, a 'lifestyle'-orientated Nissan Juke-style small Crossover or one of the cheaper little convertibles. On the used market, as with the new market, they might like the way that this Vauxhall brings all these attributes together. Those buyers that do will certainly be individualists - people prepared to try something new who don't mind paying a little more for the privilege of doing so. Vauxhall hopes that they'll find the ADAM ROCKS and ROCKS AIR models to be fresh and different. But then they need to be for the kind of money being asked here. Both models sold until 2018 and were discontinued a year before the ordinary ADAM left the sales lists at the end of 2019.

We're now used to seeing little Nissan Juke-style Crossover-class vehicles based on 'B'-segment Superminis but the ADAM ROCKS, we were told by Vauxhall back in 2014, was the very first Crossover to be based on a smaller 'A'-segment citycar. In this niche model, the Griffin brand brought us an ADAM that was taller, wider and tougher than its ordinary stablemates. Mild attempts at the lifestyle-orientated 'SUV-ness' demanded from this type of design were delivered by the front and rear silver skidplates provided to draw attention to a ride height that has been raised by 15mm. You'll want to know about the opening top, which, as with cars like Fiat's 500C and Citroen's DS3 Cabrio, is really more of a giant sunroof than any sort of proper convertible arrangement. That arrangement has the other advantage of not impinging upon access to the boot - or the space that lies within it. Which is just as well, for the 170-litre total this Vauxhall offers is a little less than what's available from the models we've just mentioned and is accessible only over quite a high loading lip. Up-front, the designers made some effort to give this ROCKS AIR model a bit of its own distinctive character, with the main instrument cluster, the seat and door panel colours and various other trim elements all unique to this derivative. The clean overall design is complemented by a centre console proving that GM designers from this period really could do this kind of thing in a smart, concise and easy-to-use form. Instead of the rows of complicated little dials and knobs you get on a Corsa, an Astra or an Insignia from this period, there's a simple, easy-to-grasp layout that most original buyers want to dominate with the optional 7-inch LCD colour Intellilink infotainment system you'll find fitted to most used models. 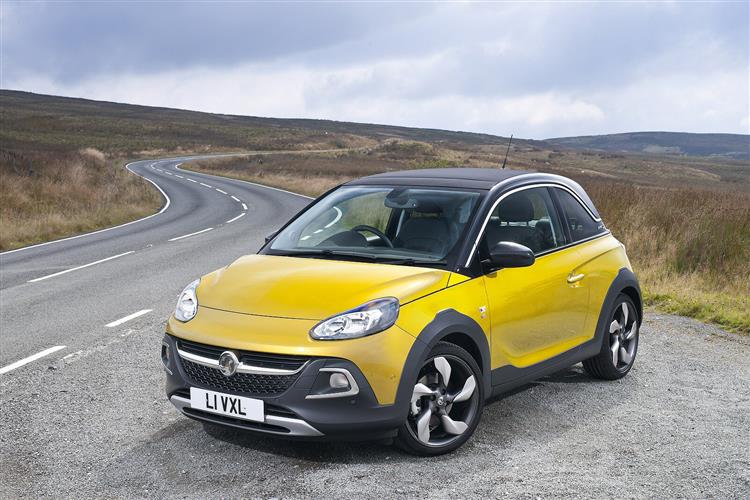