The Land Rover Defender is one of those iconic cars that almost everyone recognises. The first generation version was - visually at least - hardly changed in over half a century of production, though in its latter years, quite a lot was done to update it. Here, we look at the very last first generation models produced between 2012 and the end of production in 2016, these equipped with a Euro 5-compatible 2.2-litre 122hp diesel engine.

Once upon a time, back in 1947, there was a man called Maurice Wilks. By day, he was Chief Designer of the Rover car company. By night and weekend, he was an enthusiastic amateur farmer at his small holding in Anglesey, aided by an old war surplus Willys Jeep. When one day, the Jeep spluttered to a halt, Maurice had a problem. Spare parts were impossible to get, as were replacement vehicles. Secretly, Wilks was rather pleased: he'd always rather fancied having an excuse to design something better. He did - and nearly seventy years and 2 million vehicles later, as you can see, it's still going strong. First known simply as the 'Land Rover', this vehicle was first launched at the 1948 Amsterdam Motor Show as something much more than a motor vehicle. True, it could be used as a car, but it was also designed for use as anything from a power source to a small tractor, the ultimate Swiss army knife of farming equipment. Over the years, ownership of the Land Rover brand came and went but this iconic vehicle remained much the same, gaining coil springs and a slightly longer wheelbase in 1984, then the Defender name in 1989 to differentiate it from some of the brand's other products. The New Millenium saw this car with a rattly old Td5 diesel engine, eventually replaced in 2007 by a 2.4-litre diesel borrowed from Ford's Transit and good enough to power the vehicle for five more years until final changes were needed to meet Euro 5 legislation. Which brings us up to 2012 - and to the version we're here to look at as a used buy, the last, historic throw of the dice by the Solihull brand that was the final 2012 to 2016-era version of the original Defender. This car could climb many obstacles but the biggest of all, the legislator's pen, ultimately defeated it. Even back in 2012, it didn't have efficient enough emissions to be sold in the States and by 2016, it couldn't be sold in Europe either and was deleted from the Land Rover range while the brand prepared a new-era version, eventually launched in the Autumn of 2019. But that model was almost unrecognisable from the car that began life on Maurice Wilks' farm. And if it's too pricey or doesn't really suit, you can still enjoy a 'proper' Defender it you search out one of these last-of-the-line first generation models. Back in 2012, these gained a slightly cleaner Euro5 engine, a 2.2-litre Ford-sourced Duratorq diesel unit, fitted with a diesel particulate filter. Other updates - ventilated disc brakes, the option of more comfortable seats and upgraded stereo equipment - were more minor, but then the previous 2007 upgrade had already introduced a redesigned gearbox, extra sound insulation and a smarter, slightly more car-like interior. In fact, in this first generation Defender's latter years, quite a lot was changed to differentiate it from the Land Rover original - but ultimately, nothing was really very different. After the end of diesel model production, a final version - the Defender Works V8 70th Edition - was announced fitted with a 405hp petrol V8 and only 150 examples were made

What You Getword count: 726

Is there a more iconic shape in British motoring than this one? We doubt it. This is a national treasure, a statement of Britishness that you'll find used by aid agencies, mountain rescuers and explorers the world over. Visually, little changed on this first generation model over the years, apart from the raised bonnet necessary to accommodate the larger, more recent diesel engines. By 2012, this part of the car, rather sadly, was no longer fabricated from long life aluminum but most of the other simple, flat, easy to repair panels you'll find around the bodywork still were, these still bolted, as ever, to a tough steel box section ladder frame chassis. You can even see the rivets. There are some anomalies though. Climb inside and you'll find that though there are modern optional touches like an iPod socket and a full-house 10-speaker Alpine stereo, basics like electric mirrors and any sort of airbag are noticeable by their absence. Traction control and ABS are only optional on plusher models and you still can't have height adjustment for either the steering wheel or the seat. Engineering priorities we suppose. Still, how many other cars can offer a rear external power take-off, allowing you to take the vehicle anywhere and use it as a mobile generator? At the wheel in what Land Rover calls its 'Command Driving Position', you gaze out through the traditional flat screen and in a post-2012 model, sit on plusher more supportive seats, so it remains refreshingly utilitarian. Having said that, despite the rows of blanked-off switches, it's now much smarter than the cabin you'll find in more elderly Defender models, thanks to instruments borrowed from the Discovery and a one-piece dashboard with fresh air eyeball vents, a fascia unit that eliminates a lot of the creaks and rattles you used to get. We'd certainly want a car fitted out with the useful - but sadly optional - 14-litre centre storage box. Some of the old throwbacks remain though: the upright handbrake; the key that can't be turned when the headlamp switch is in the 'on' position; the after-market stereo; the restricted rearward front seat travel; the weak headlights; the wipers that clear just a part of the screen; and perhaps most initially annoying of all, such ridiculous cabin narrowness that you're constantly bashing your elbows on the windows during low speed maneuvering. The original designers, you see, prioritised other things. At night in the Gobi desert, you're going to be more interested in the fact that this vehicle has a volcanic heater, than the reality that the column stalks date back to the original Austin Metro. And during the day there, you'll care that the air conditioning offered on plusher versions cools the cabin twice as quickly as it did on more elderly models. It all reminds us that in older, tougher days, air conditioning on this car used to be supplied by a flap at the front, freezing your hands on the steering wheel in Winter, and though that was improved after the turn of the century, it wasn't by much: before 2007, this car didn't even have side window demister vents. For passenger-focused owners, there are two main 'Station Wagon' wheelbase shapes. The three-door short wheelbase Defender 90 has just four seats that, rather uniquely, you can only access through the rear door - no MPV-style slidy-foldy chairs here. Still at least rear occupants do sit facing forward rather than perched on the side of the vehicle as they used to be. If you want a bit more passenger versatility, you'll be more interested in the five-door long wheelbase Defender 110 variant which, thanks to its extra length, can accommodate up to seven folk, with the third seating row again these days conventionally forward-facing and sited ahead of a vast boot which is even carpeted (a bit odd that, given that you're supposed to be able to hose the cabin out). Cabin legroom is in fairly short supply but with the boxy, airy, high-set interior, you don't really notice it too much. Headroom is at a bit of a premium too thanks to the way that this second row has been perched up so much higher than the seats at the front. It makes this car a great vehicle to ride in: you can just imagine yourself on a jungle safari. 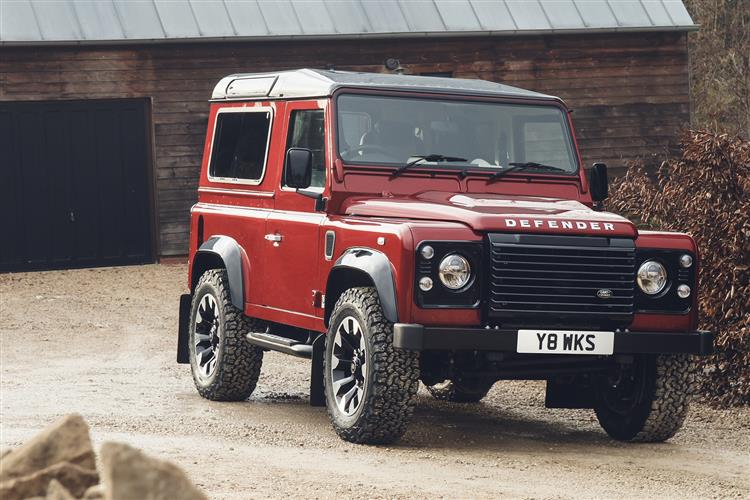