Volkswagen's Golf is the family hatchback against which all others are judged. The seventh generation version became cleverer and classier than ever before, particularly in the improved 2017-2019-era guise we're going to look at here from a used car buyer's perspective. If you're shopping in this segment for a family hatch made in this period, you might be asking yourself why you should buy one. But perhaps the more pertinent question is whether there's really any reason why you shouldn't.

Back in the Seventies, the original Golf saved its brand from bankruptcy. This revised version of the seventh generation model didn't face a task quite on that scale, but it did arrive at a post-'dieselgate' period when Volkswagen as a manufacturer urgently needed a period of solid product continuity. Loyal buyers needed to be reassured by strengthened brand values. Conquest customers needed convincing that paying a premium to own a Volkswagen was still worth doing. Quite a task. But then this was a Golf, a car that by 2017 was in its fifth decade of a production run that had previously generated over 33 million sales. When it comes to family hatchbacks, it was, we're told, 'the definitive article'. It needed to be, for by 2017, the family hatchback market was in an era when the marque needed to step up its game. Volkswagen's in-house Skoda and SEAT brands were offering Golf technology for less, the South Korean competition was improving and more familiar mainstream family hatch rivals were adding premium quality and technology that, in the words of their marketeers, made them 'more Golf-like'. In response, Volkswagen launched this car at the end of 2016, still recognisably a seventh generation Golf - but perhaps not as you might know it. There was a dazzling array of optional infotainment, with top-end technology buyers could even operate by gesture control. If specified correctly, a post-2017-era Golf could drive itself in traffic jams and take over completely if the driver was ever incapacitated. Plus there was also a fresh 1.5-litre TSI Evo petrol engine, a new 7-speed DSG auto gearbox and more power for the performance models. Along with subtle changes to cabin quality and exterior styling that took the look and feel of this Volkswagen even further up-market. In short, it was claimed that this car had been thorough rejuvenated. It sold until the all-new MK8 Golf was launched in late 2019.

It's a Golf. You don't need us to tell you that. This is one of those cars that almost everyone recognises. What's less likely is that your friends and neighbours will pick up on the fact that you've bought into the revised post-2017-era version of this seventh generation model. The changes that distinguish this improved design were, after all, extremely subtle - intentionally so, to preserve the residual values of the previous version. The design of this car has been painstakingly evolved over more than forty years and for the 2017 model year, Volkswagen had no intention of dramatically changing it. If you're familiar with the original version of this MK7 model, you won't find the interior to be very different - which is a very good thing indeed because that design set fresh ergonomic standards in this segment that in 2017, many rivals were still struggling to match. To further underline this model's superiority in this regard, Volkswagen added new trim panels in the centre console and the doors and smartened the upholstery, but what you're more likely to notice is the bigger centre-dash infotainment screen. Previously, you only got an 8-inch monitor as large as this one if you pushed the boat out with one of the costly premium navigation packages. From 2017 onwards though, a display of this size was fitted as standard across the range, upgraded in some models to the 'Discover Navigation' system that's fitted to plusher variants and was optional lower down the range. What about back seat space? Well those of you already familiar with the MK7 Golf will know that this seventh generation model grew quite significantly in size over its predecessor, with benefits across the rear bench in both head and legroom. As a result, this Golf's back seat remained one of the more spacious rear seat areas in the segment. And the boot? Well the 380-litre space provided here is 64-litres more than you get in a rival Ford Focus, but this Golf's capacity is still significantly down on what you'd find in segment rivals from this era like Skoda's Octavia, Honda's Civic, Toyota's Auris and Peugeot's 308. Freeing up more cargo capacity is easier to do than it would be in a rival Focus from this era where you've got the faff of having to pull up the rear seat cushion before you can push forward the rear seatbacks. Here, you just push the 60:40-split backrests forward and they fold almost completely flat, creating a cargo area that's 1,270-litres in size. 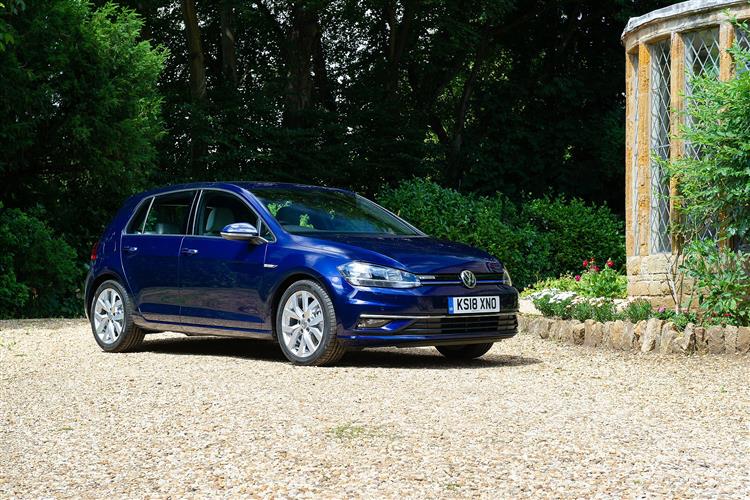