One thing Mercedes' big V-Class isn't short of is space. Post-2015 'W447'-series version of this model is a People Carrier in the truest sense and it's only real competition comes from other large, van-based MPVs - or public transport. In using it, you might be on a shopping spree, heading out for a mountain bike holiday in the Alps or driving prominent guests to a red carpet event. Either way, if you want to take up to eight people and their luggage in a vehicle that makes a very high quality statement, then it's a difficult option to ignore. Here, we consider the 2015-2018-era version of this model as a used buy.

There aren't many alternatives open to you if a really sizeable People Carrier is needed from the 2015-2018 era that can take seven or eight people plus all their luggage. And if that MPV must make a really sizeable statement of quality, the options reduce to just one: this Mercedes V-Class. Like its most direct competitor, Volkswagen's Caravelle T6, the only way that this V-Class can offer up to eight seats and appreciably more space than is already available from cheaper Ford Galaxy or Volkswagen Sharan-class large People Carriers is to be commercial vehicle-based. In this case, on a Mercedes Vito. That might not be the biggest van that Stuttgart makes but it's quite large enough to create in the V-Class a very sizeable MPV indeed. Back in 2015, the objective here was to finally overtake that Volkswagen Caravelle rival we just mentioned and establish a Mercedes benchmark in this segment. That was something this 'W447'-series design's MPV predecessor models - the original V-Class of the Nineties and the Viano of the early Noughties - never managed to do. The first V-Class was plagued by reliability problems and the subsequent Viano looked and felt embarrassingly cheap. For this modern generation V-Class though, the prospects were much better. Gone was the Viano's plasticky van-like cabin and frumpy front end. Gone too was that car's slow-witted auto gearbox and its thirsty V6 engine. The ponderous handling was sharpened up as well, while inside, buyers could have the sort of luxury they'd expect from Mercedes' S-Class limousine - but with a lot more passenger space. With the biggest of the various body styles - the Extra-Long version - and up to eight people could be accommodated. Add in class-leading safety and the option of cutting-edge connectivity and the scene seemed to be set for a super-large People Carrier that at last might be able to properly justify the Stuttgart brand's premium pricing. Sure enough, well over 200,000 V-Class models were sold in the 2015-2018 period before a revised range was announced in early 2019. It's the pre-facelifted 'W447'-series model we look at here.

What You Getword count: 723

This Stuttgart brand claimed that this 'W447'-series V-Class was here really 'the Mercedes amongst MPVs', rather than a minibus version of the brand's Vito van with a bit of extra chrome trim. And buyers were certainly more inclined to believe that with this post-2015 model, the designers having made more of an effort than ever before to differentiate this model from its commercial Vito Tourer stablemate. The main design changes were made at the front where a sculptured V-shaped bonnet merges smoothly into the chrome frame of the upright radiator grille with its three-dimensional centrally positioned three-pointed star. Space, Mercedes tells V-Class customers, is the true definition of luxury and on that basis, this MPV must be very luxurious indeed, given its enormous square dimensions. Just how much space we're talking of here depends on the body style you choose. The brand's previous Viano model came in 'Compact', 'Long' and 'Extra Long' sizes. This V-Class was launched in 'Long' and 'Extra Long' sizes, with a shorter 'Standard length' body shape alter added at the bottom of the range. All variants are the same height, a 1,880mm figure that's slightly lower than that of the old Viano to enable easier access for V-Class drivers into places like car washes and low-roofed multi-storey car parks. From new, the two longer derivatives were available in either 7 or 8-seater formats. In terms of length, we'd want to super-size things with the biggest Extra Long variant, which extends the 4,895mm length of the 'Standard' model out to 5,370mm. That extra 475mm of additional length gives you more options - not only in terms of the number of people you can carry but also in terms of being able to deal with everybody's luggage without resorting to things like roof boxes and trailers. That's the main difference between MPVs that are merely large - like Ford's Galaxy or Volkswagen's Sharan - and those like this one that are van-based and super-sized. Fill up a Galaxy or a Sharan with seven people and there's only around 300-litres of cargo space to play with - not nearly enough for everyone's baggage. In contrast, lifting the tailgate of the Extra Long V-Class model reveals a space more than four times bigger. Not that you do have to lift it. For a start, this V-Class model's rear door is electrically-operated but quite apart from that, there's also the convenience of a separately lifting rear glass section if all you want to do is throw in a few lighter items - or perhaps you don't have the space to open the complete tailgate. If you go the whole hog and take second and third row seating out (not easy because the chairs are pretty heavy), your V-Class will be able to function as an impromptu removals van, in 'Standard' form taking up to 4,200-litres and in 'Extra Long' guise swallowing up to 5,010-litres. So, that's covered packages. But what's this Mercedes like for people? Well, up-front, it's very nice indeed. The fascia is a smart two-section design, with upper and lower parts separated by a three-dimensional trim element that tries to give the cabin a feel of width. Look around you and the two staples of 2015-2018 model-era Mercedes cabin style are present and correct. There are four round chrome-ringed air vents with metallic cool-touch finishing, while between the two in the centre sits a prominent iPad-style infotainment screen, its free-standing positioning smacking either of after-thought or inspired design, depending on your point of view. Move into the second row and in a seven-seat model, the electric sliding doors you get on both sides of the vehicle glide back to reveal two individual reclining chairs. They're reasonably comfortable too, featuring double armrests and reclining backs. Go for the two larger body styles and the eight-seater cabin layout option will give you three slightly narrower seats in the middle row. As you'd expect, the outer middle row seats tilt forward to allow access to the very back of the vehicle. And third row seating that accommodates three people and for once in an MPV feels spacious and airy. Large families will also like the fact that two child seats could be clipped into the two outer seats while still leaving plenty of room for an adult to sit between the kids in the middle. 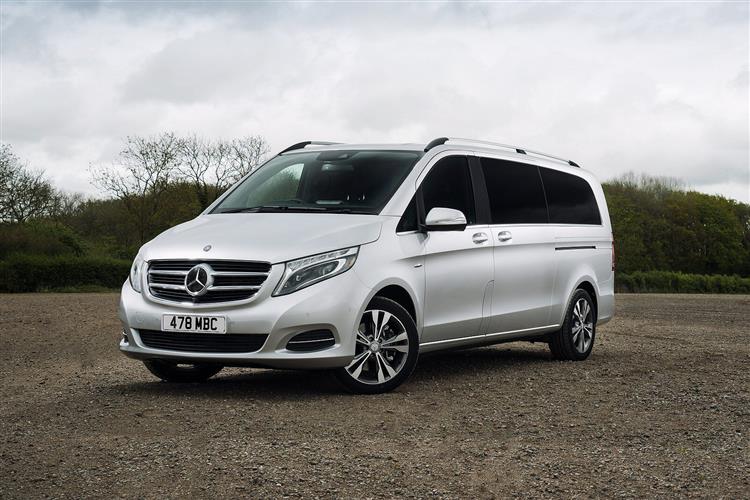