For many years, Mercedes was curiously absent from the mid-sized premium SUV market in this country - but they're a major player now. This GLC model, launched in 2015, was the German brand's answer to prestige players in this segment like the Audi Q5, the BMW X3 and the Range Rover Evoque. It may have been late to the party but it proved to be an impressively strong contender. Let's check the pre-facelift version out as a used buy.

The early part of the 21st century's second decade was characterised by the Mercedes brand's expansion into almost every conceivable market niche; compact Crossovers, lifestyle estates, MPVs, supercars - even Plug-in and all-electric technology. No potential industry segment, it seemed, was left uncovered. Except, in the UK at least, for one of the most obvious. That for premium mid-sized SUVs - a car like this, the GLC. It wasn't that Mercedes couldn't take on key players in this class like Audi's Q5, BMW's X3 and assorted Land Rover products. On the contrary, between 2009 and 2015, the brand had a GLK-Class model that did exactly that in a way so effective that it became the company's best selling SUV. Unfortunately though - and rather astonishingly - the GLK wasn't ever engineered for manufacture in right hand drive form. Big mistake. That one oversight must have cost Mercedes millions in terms of lost sales, not only in the British market but also in other right hand drive territories like Australia, South Africa and Japan. Still, times changed, heads rolled and the Three-Pointed Star got back on track when this GLC model was launched in the Autumn of 2015, priced and positioned directly against its key premium SUV rivals and offering the kind of unique selling point that all new segment entrants should have. Buyers got an option that no direct rival of the time could match - the kind of sophisticated air suspension system previously limited only to much larger and more expensive SUVs like Mercedes' own GLE and GLS models. In fact, there's was much about this car that democratised pricier SUV luxury, whether the customer's focus was on media connectivity, cutting edge safety or cabin aesthetics. As with the larger GLE model, there was even a separate bodystyle, the 'GLC Coupe', aimed at more fashionable folk looking at cars like BMW's X4, Jaguar's F-PACE or the Range Rover Evoque. Here though, our focus will be on original versions of the standard version. This car was significantly updated in mid-2019, but it's the pre-facelift versions we check out from a used market perspective here.

What You Getword count: 426

Up front, the look of the standard GLC SUV model is characteristically SUV, with short overhangs and an upright, three-dimensional twin-louvred radiator grille. This is dominated by the usual centrally positioned Three-Pointed Star and flanked by intricately formed jewel-like headlamps incorporating LED daytime running light strips and optional full-LED illumination. The bumper gets an integrated under-guard and comes in three distinct guises to suit either standard, off-road-orientated or sporty AMG models. View the car in profile and the C-Class ancestory is evident in the gently sloping dropping line just below the door handles, a distinctive characteristic of that car. This rising lower crease also plays its part in giving the flanks some shape, connecting wheel arches featuring matt black cladding that can house rims varying from 17 to 21-inches in size. Strong rear haunches and standard rear privacy glass complete the effect. The broad, muscular shoulderline is carried through into the rear, where silver-trimmed tailpipes feature on most models and the split tail lamps feature distinctive LED illumination. As at the front, different bumper designs are provided for different variants. Further signs of this car's C-Class model heritage are evident once you take a seat behind the wheel - which means that it's very nice indeed. Get into one of the brand's older generation models and you're faced with a functional cabin that's about as stylish as Angela Merkel. This more modern design could hardly be more different, with eye-catching metal highlights, a beautifully-judged balance of high quality materials and a broad eye-catching centre console sweeping between the front seats. Take a look around once you're comfortably seated inside and the two staples of current Mercedes cabin style are present and correct. There are five round silver-trimmed air vents and above the three in the centre sits a prominent iPad-style infotainment screen, its free-standing positioning smacking either of after-thought or inspired design, depending on your point of view. And in the back? Well if you've been persuaded to buy one of these in preference to a C-Class Estate, it's here that that decision will pay off. The GLC has 33mm more length in its wheelbase than one of those would offer and nearly all of that has been used for the benefit of rear folk who as a result enjoy significantly improved room for their legs and knees. Let's finish by taking a look at luggage space, accessed via the standard electrically-operated tailgate. Mercedes obviously benchmarked BMW's X3 here, for the load capacities on offer match those of that Munich model exactly. Specifically, you're talking 550-litres. 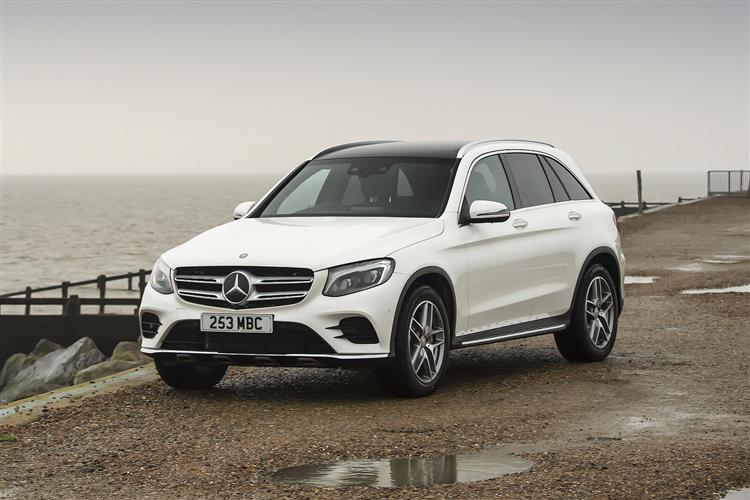