TO B OR NOT TO B (some text hidden)

Smarter, better to drive, more efficient and with lots more space, the second generation Mercedes B-Class that sold in the 2012-2018 period was made of the right stuff. More versatile than a family hatch, less frumpy that a 5-seat mini-MPV, it proved to be an interesting and high quality choice for smaller families.

Mercedes has always struggled to build compact, affordable cars that feel like, well... a Mercedes. Just after the turn of the century, you tried a first generation A or B-Class and thought it nicely built but not quite special enough, ultimately a very expensive way to buy a very expensive badge. And that was a problem. Executives, you see, rarely question the Three-Pointed Star price premium in their large, smart saloons and SUVs, its necessity obvious every time they ease behind the wheel. Without that extra class, choosing one of this brand's smaller models just seemed like a colossally costly way of buying what in essence was a fairly ordinary family hatchback. The suits from Stuttgart knew it and in response at the end of the 21st Century's first decade, invested more than ever before in a new, more Merc-like generation of compact models. This is one of them, the second generation B-Class which arrived here in the early Spring of 2012. No model change in the history of this brand had ever seen the introduction of so many developments at once. Everything from the platform this MK2 B-Class sat upon to the powerplants that drove it was re-engineered from scratch, alongside strong standards of safety, a sharper chassis and hi-tech equipment. And yes, most importantly, we were promised a proper 'premium' feel in this, the brand's second stab at what it calls its 'Sports Tourer'. As for what exactly one of those might be, you can get a feel for the answer at first glance. Here's a car that's clearly more practical and versatile than a Golf or Focus-sized family hatch. But not as frumpy and high-set as a five-seater C-MAX or Scenic-like mini-MPV. It's the Mercedes take on compact, upwardly-mobile motoring for a compact, upwardly-mobile family. It sold until a third generation version was launched in early 2019.

What You Getword count: 800

If you'd removed the front grille and badgework from an original first generation B-Class model, you'd have been left with a shape that could have been made by almost anyone. This MK2 version, in contrast, has much more of a brand-based identity. For a start, it's astoundingly sleek for something so necessarily boxy in remit. Compared to this car's Cd drag factor of just 0.26, most other MPVs and family hatches are about as wind-cheating as the average garden shed. The reasons why are down to the detail with small but significant touches like the serrated wheel arch spoilers. Hi-tech compensation perhaps, for the fact that under the skin, this car is actually less revolutionary than its predecessor. To improve its structural rigidity, that car had a theoretically clever double-layer floor that Mercedes now admits wasn't a very good idea, compromising as it did both the driving position and the practicality of the cabin layout. Without it, this B-Class crouches almost 5cms lower on the road than its predecessor, with a sportier, more agile demeanour emphasised by its signature styling flourish, a blade-like crease that flows diagonally upwards across the rear doors to the tail lamps. Inside, the lower roofline didn't translate into less headroom. In fact, there's actually more than the MK1 B-Class could offer, something you especially notice at the rear where there's potentially more legroom than Mercedes offers in an S-Class luxury saloon. To really stretch out, you'll need to have got a model whose original owner paid extra for the EASY-VARIO-PLUS system. This enables the rear bench to both recline and slide backwards and forward by up to 140mm to maximise space for either passengers or their packages behind. Which is all well and good if there are only two of you at the back. A third adult though, is not going to be very comfortable at all, perched as he or she must be on a seat that really isn't a seat at all but instead a raised section of upholstery linking the two outer chairs. Worse, this car's front driven layout didn't prevent a transmission tunnel-shaped intrusion robbing centre seat legroom. It is, in summary, easy to see why Mercedes never wanted us to call this an MPV. With what is essentially a four-person carriage capacity, that might leave them with something to answer for under the trades descriptions act. Yet the luggage room on offer is undeniably very MPV-like, even if the 488-litre capacity is a little down on the figure offered by the previous B-Class model. It's slightly more than you'd get in a Ford C-MAX for example, and about 50% bigger than the restricted space you'd have to put up with in a Golf or Focus family hatch. Plus, if you've got a car whose original owner opted for the sliding back seat, you can push it forward and increase the luggage compartment capacity to 666-litres without chucking any passengers out. That though, may not be necessary if you poke longer items through the ski-hatch also included in the EASY-VARIO-PLUS package. As part of that, Mercedes also threw in a fold-flat front passenger seat, should you flatten the 60:40 split-folding rear seats and find the 1545-litre total capacity to be insufficient. The boot floor can be raised to make the loading area completely flat. Which is all very worthy - but now for the best bit. Behind the wheel. It's very hard to think of any used family car from this period at around this model's price point that feels as good as this one once you get into the driver's seat. It's a beautifully conceived cabin, from the three-dimensional fascia finish to the SLS supercar-style air vents. From the grippy three-spoke leather-covered steering wheel to the iPad-like colour central info screen (either 5.8 or 7-inch in size) that sits on top of the dash. This, more than anything else, is what will sell this car. Sitting here, you reason that of course a Ford C-MAX is cheaper: so it's a Marks & Spencer's suit compared to an Armani - but which would you rather have? And the interior's practical too. There are the usual cup holders, door pockets large enough to put things in - like a couple of bottles - plus a decently-sized glovebox and plenty of nooks and crannies for the various bits and pieces that inevitably go with family motoring. There's a USB socket nicely concealed in the glovebox rather than unpleasantly displayed on the dash and of course a 12v socket for easy charging. But practical touches like these aren't what you'll take away from first impressions inside this car. Every lever and stalk functions with a quality click suggestive of a car that will out-last you. It is, in every way, a proper Mercedes experience. 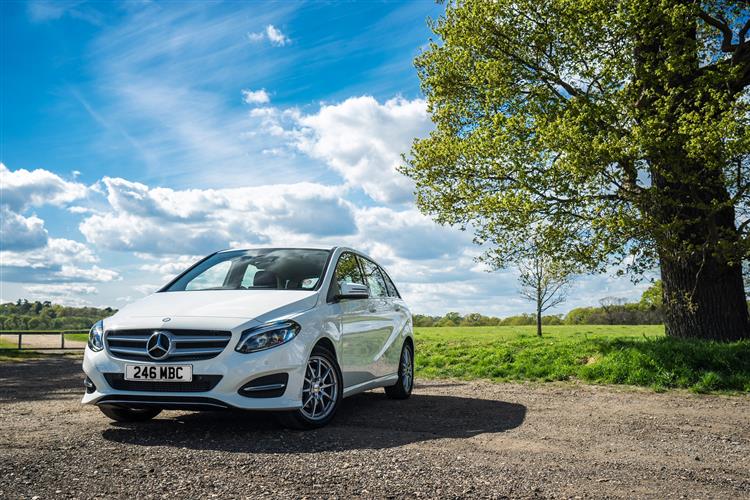