Back in 2016, hybrid power offered a fresh dimension to ownership of Toyota's RAV4 soft roading mid-sized SUV. Through this car, the brand offered buyers in this segment the most affordable route into frugal petrol electric power with its greater refinement and clean emission tax benefits. Plus this improved fourth generation design delivers smart styling, decent safety provision and plenty of media connectivity. It's worth a look as a used buy.

There's clearly quite an appetite for hybrid power amongst buyers shopping in the mid-sized SUV segment. Back in 2016 then, it made sense then for Toyota, the brand that invented this form of propulsion, to weigh in with its own offering, this car, the RAV4 Hybrid. In many ways, it's puzzling that it took until the Autumn of 2015 for this model to be made available for the 2016 model year. Prior to that time, Toyota had, after all, been developing petrol/electric power ever since it launched the very first version of this RAV4 back in 1994, and in the early years of the 21 century, hybrid engines became a signature item for the brand. Toyota though, wanted to make sure it had understood the market correctly before wading in. Could it use the kind of conventional nickel metal-hydride petrol electric technology familiar from its Yaris, Auris and Prius ranges - and indeed from sister brand Lexus's similarly-sized NX SUV model? Or, should it push up-market with the kind of lithium-ion Plug-in hybrid engine championed in this segment by Mitsubishi with its rival Outlander model? In the event, Toyota stayed with proven non-Plug-in hybrid power, seeking to keep this car accessible and affordable in its target market. Plenty of sophistication was still promised though to RAV4 Hybrid buyers. Indeed, with a combined system power output of 195hp, this model was the most powerful hybrid Toyota ever. It also benefited from a round of improvements that substantially enhanced the RAV4 ownership proposition - things like smarter looks, a re-designed interior, extra safety and more up-to-date infotainment. This car sold until the hybrid-only fifth generation RAV4 was launched in early 2019.

A RAV4 must never be big and bulky. Buyers have always looked at one and thought 'yes I could drive that', 'yes, I could park it' and 'yes, that would look rather nice in the driveway'. All these observations, of course, apply to this restyled MK4 model, but with this design, there's a sense of individuality that arguably, the RAV4 hadn't had since the Nineties. The most notable changes with the post-2015 version took place up-front, where a smarter slender upper grille is flanked by re-styled headlights featuring LED technology on plusher versions. Inside, the instrument binnacle, the centre console and the gear lever surround were all revised with higher quality materials, all in an effort to try push this car up-market. The driver-centric section is framed by a silver-finished hoop that rises from the transmission tunnel and cuts through the dashboard beams to frame instrumentation delivered by two separate circular dials. The left hand one will be a Hybrid system indicator replacing the usual rev counter. Between these gauges, Toyota added in a 4.2-inch multi-information display to this improved model, this showing safety information, trip computer data, a compass and audio settings. Anything this screen can't tell you will probably be covered by the 7-inch centre dash infotainment monitor the fascia was re-designed to better accommodate. And in the rear? Well if your experience of RAV4 motoring is limited to older MK1, MK2 or MK3 versions of this car, make sure you take a seat here to experience the differences because they really are significant. The redesign that created the original version of this MK4 model in 2012 added an extra 100mm to the wheelbase of this car and pretty much all of it was used to benefit back seat occupants who get plenty of knee room and class-leading standards of space. Out back, you get 501-litres of boot space with the Hybrid variant. 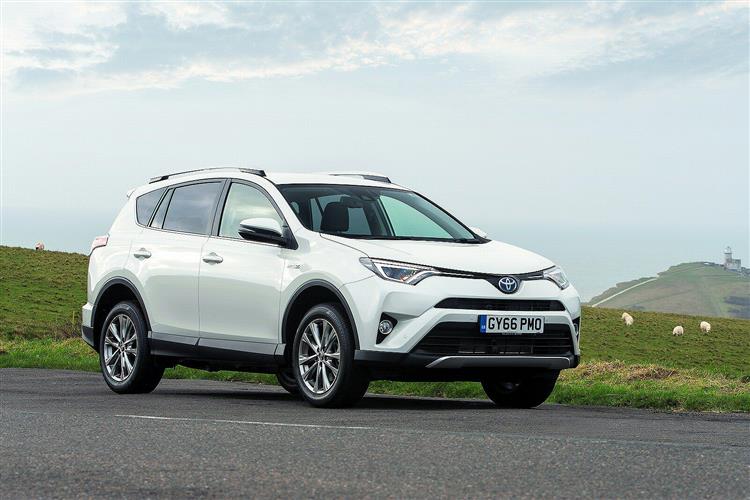