The CLA, originally launched in 'C117'-series first generation form back in 2013, was a rather different kind of Mercedes. It was compact and coupe-like, yet offered buyers four doors and a large boot. Or it could be had as a stylised 'Shooting Brake' estate. And it could set the neighbours talking far more than if you'd simply bought yet another small German-badged executive saloon. It was a model to challenge your preconceptions, that's for sure. But does it make sense as a used buy?

Never underestimate the power of emotional appeal. It's brought us cars like this one, the Mercedes CLA, an effortlessly stylish compact saloon (marketed as a 'four-door coupe') that back in 2013 brought a fashionable feel to the Stuttgart brand's growing family of smaller models. To fully understand it, you need to be familiar with the so-called 'four-door coupe' concept, pioneered by Mercedes back in 2004 with their CLS-Class model, the first example of this kind of car and a trendier alternative to their similarly-sized but much more conventional E-Class saloon. The CLS was a huge success - to the point where it seemed only a matter of time before this prestigious German brand extended the concept to offer the same kind of car as an alternative to its smaller, more affordable C-Class saloon. In fact, it took until the Spring of 2013 for them to do just that and launch this CLA model, initially known as the 'CLA-Class' and latterly just as the 'CLA'. By the time of this 'C117'-series model's original launch, the whole idea of the same brand offering the same kind of car in both 'standard' and stylised 'lifestyle' guises was well established right across the market. It's why in this period Fiat offered citycar buyers an ordinary Panda and a trendy 500. Why Citroen treated supermini folk to the dull C3 and the fun DS3. Why Land Rover would bring you the boxy Freelander and the stylish Range Rover Evoque. And why Volkswagen copied Mercedes' CLS to bring us a swoopy CC version of its conventional Passat. You get the idea. In other words, if you're target market for a car like this CLA, you'll be someone who likes the idea of buying a sporty, prestigiously-badged compact saloon but wants to make a bit more of a statement about doing it. As we said, it's all about emotional appeal. The first generation CLA four-door coupe was joined by a 'Shooting Brake' estate version in 2014. High performance Mercedes-AMG CLA 45 4MATIC variants of both body styles followed. All variants then sold until 2019, when they were replaced by second generation models.

What You Getword count: 840

By any measure, this is a handsome car, whether you choose it in four-door coupe guise or in 'Shooting Brake' estate form. Either way, the look is purposeful, with sporting proportions and a potent bonnet powerdome. Hi-tech too, with jewel-like LED daytime running lamps fashioned to create a flare effect around the diamond-shaped grille. The effect is reminiscent of the kind of motorshow concept car you'd never expect to see in production, in this case the 'Concept Style Coupe' Mercedes showed at the 2012 Beijing Motor Show, then launched almost unaltered to a surprised market less than a year later. It's not just about aesthetics either. The super-sleek drag factor of just 0.23Cd made this back in 2013 not only the most aerodynamic Mercedes model to date but also the most aerodynamic production vehicle in the world. Underneath, inevitably, it's all far more familiar, this model sharing its chassis, its engines and everything else under the skin but its suspension set-up with Mercedes other compact cars, the A and B-Class models. So in other words, it's four cylinder-only and front-driven, unlike the boxier W204 series C-Class model it was launched to sell alongside. It's slightly bigger than that car too and, as we've been suggesting, has a much shapelier look, especially from the side where the profile is determined by two prominent lines flowing down into and up into the powerful shoulder muscles that sit above the rear wheel arches and define the C-pillars. The rear end with its interplay of convex and concave surfaces and edges is possibly a little more controversial, the gently sloping roof contour and rear window curvature there to emphasise the coupe styling that aims to try and sell you this car. The cabin's virtually identical to that of an A-Class - which by 2013 was a good thing. So you get the same deeply-cowled twin-dial instrument binnacle viewed through a lovely, grippy nappa leather-trimmed three-spoke multi-function steering wheel. There are the same five chrome-trimmed SLS supercar-style air vents decorating the dash. And you get the same iPad-style 5.8-inch free-standing infotainment screen stuck in the middle of it, controlled by a little rotary dial positioned where the handbrake would normally be if it hadn't been replaced by one of those fiddly electronic ones with a switch hidden away beneath the dash. The materials used don't quite have the rich, deep hewn-from-granite feel you get in an Audi from this period but the finished effect is a step up from anything BMW offers at this level from this era and build quality from the Hungarian factory was faultless. Overall, we'd say that this is probably the most interesting cabin in the class from this period, a classy effort with plenty of showroom feel good factor. Not quite so impressive is the way that the wide pillars, high waistline and shallow rear screen of this stylised design contrive to rob you of both side and rearward visibility. It's something Mercedes was clearly well aware of, hence the decision to equip this car as standard with an Active Park Assist system that steers you into tight spaces. That's fine to stand in the gap for you during low speed manoeuvring but if this was our car, we'd want to find one whose original owner had had the foresight to pay extra for the optional Blind Spot Assist and Lane-Keeping Assist features that keep an extra eye out for you at speed. As for back seat accommodation, well any car that describes itself as a 'four-door coupe' clearly isn't going to have this as a top priority. Fashion is the keynote here - which is why you're provided with lovely frameless doors, just like a pricey CLS-Class model. Negotiate around the plunging roofline and get yourself inside though and it is a little surprising to find that despite this car being 40mm longer than a W204 generation Mercedes C-Class, it offers significantly less space for rearward passengers. There are two issues really. First, it'll be much more of a squash to fit a third person in the middle here. And second that the sloping roof will restrict headroom for taller people. Ordinary folk with older kids will be OK though. Ultimately, we don't think it'll be a deal-breaker for many buyers. Particularly as boot room is so spacious. There's quite a high lip to lump your packages over, but once you do, there's a generous 470-litres on offer, nearly as much as a four-door C-Class and 45-litres more than you'd get in a rival Audi A3 saloon. It's also nearly 40% more than you get in a comparable Volvo S60 from this period and the same amount bigger than what's on offer in a comparable-era A-Class hatch. In other words, we're talking here of a pretty decently sized cargo area, even if it is somewhat narrow and awkwardly shaped. You can further extend it by pushing forward the standard 60/40 split-folding rear bench. If that's not enough, then talk to your dealer about the CLA-Class Shooting Brake estate model. 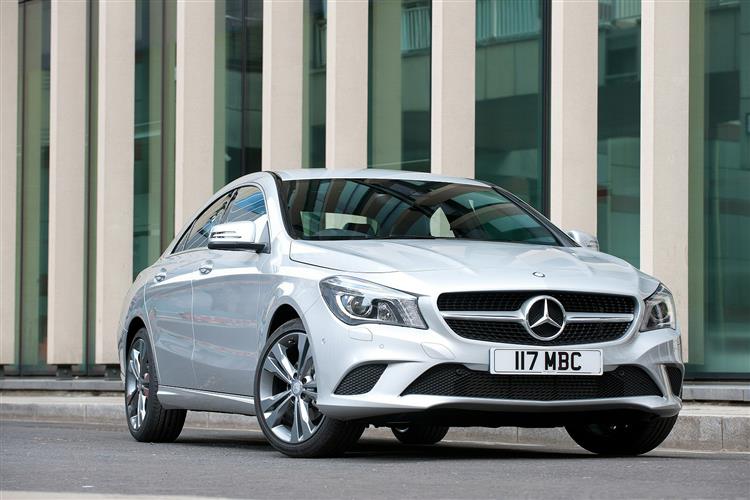