In 2012, Peugeot decided that diesel/electric hybrid motoring should be offered right across the market. And since their system incorporated four driven wheels, they used it not only in their 3008 Crossover model but also built it into their 508 Estate to create this, the RXH version, a rather unique and go-almost-anywhere eco-conscious all-wheel drive family estate rather in the style of Audi's allroad. It brought hybrid power to an all-new audience and showed just how affordable to run a car like this could be.

It seems like only yesterday that any rugged-looking family vehicle with 4WD was automatically seen as being bad for the environment. And pretty bad for your tax return too, thanks to prodigious weight and thirst. So what are used car buyers to make of this, Peugeot's 508 RXH? Sold between 2012 and 2018, it's a hefty 1.9-tonne family estate with SUV styling cues and go almost-anywhere 4WD. Yet at the same time, diesel/electric Hybrid4 power delivers running costs that are almost supermini-small. There's a price to pay for having your cake and eating it of course. Which would be hard to justify if what we had was simply a green-tinged piece of SUV propaganda. But that's not what this is. Instead, in this car, we were promised future motoring strategy made showroom reality, the combustion engine in its most frugal diesel form matched with electric propulsion. Such was Peugeot's logical Hybrid4 approach here, developed to be cleverly modular so it could be simply bolted onto the rear of anything the brand decided to make, in this case the well received Mondeo-sized 508 Estate. Electric power pushing the back wheels and diesel drive at the front offers the extra benefit of 4WD capability, emphasised in this model by a higher ride height and SUV-style bodywork. Enough to create in this RXH estate something of an Audi allroad-style alternative to plusher compact SUVs. A lifestyle car with a bit of life in it. Capable, yet careful. Hi-tech, yet highly practical. That's the promise. Let's see how it stacks up as a used buy.

What You Getword count: 656

As one of the most expensive and up-market Peugeot models ever built, this 508 RXH needs to look the part. It does. Following in the tradition popularised by tough all-wheel drive estates like the Subaru Outback and the Volvo XC70, it rides higher (50mm loftier than a conventional 508) and gets tastefully overt plastic body cladding as well as more important under-body protection measures. There's a wider track too, both front and rear, Peugeot extending the width between the front wheels by 40mm, giving the RXH a solidly planted look. And a purposeful one too, thanks in part to a front end illuminated by three LEDs strips on either side that form what the French designers see as a 'lion claw' formation. In case this isn't enough to clear the outside lane, there's also an array of seven orange LEDs that form the directional indicators. At the rear, the lights form an elegant red band that glows brightly when they illuminate. But under all this frippery, you've a shape that isn't much different to that of any ordinary well specified 508 SW estate from this era. Well, it is the same from the B-pillars forwards - and that's what makes this design so clever. Hybrid engines prior to the one fitted to this RXH you see, were usually enormously complicated things, designed from scratch, expensive solutions for eco-conscious motorists resulting in stand-alone models like Toyota's Prius. The French PSA Group wanted a simpler, more cost-effective approach and with their HYbrid4 technology, they thought they had it. This approach kept everything standard at the front end of the car, with an ordinary off-the-shelf engine conventionally driving the front wheels. At the back, the PSA engineers simply replaced the normal rear axle with one that packaged in an electric motor, driving the rear wheels. Front and rear communicate electronically depending on the traction needed and power switches seamlessly between engine and battery as required. A brilliantly straightforward solution that enabled Peugeot and its partner Citroen to bolt hybrid technology into just about any model they made in this era. At the launch of this RXH, we were also told that the packaging issues had been carefully thought through to ensure that the hybrid system's nickel-metal hydride batteries mounted above the rear axle didn't eat too greatly into luggage space. Unfortunately, they did - a bit. Raise the rear hatch and you'll find that luggage capacity falls from the 512-litres you get in an ordinary 508 estate from this era to 423-litres in this car. You do though get a useful 11-litres of extra compartmentalised storage capacity under the boot floor. If that's not enough, then you can use two side wall-mounted levers to flatten the 60/40-split rear bench, at which point total carriage capacity is revealed at 1439-litres - down from 1598-litres in the standard car. There are no special compromises for passengers though, with a cabin formula unchanged over that of any other 508. So, though in the back you don't get the practical touches you might find on some MPVs - sliding or reclining seats for example - you do get space for up to three adults to be accommodated and two to sit really comfortably. It certainly feels spacious when you're up front though - something further emphasised by the huge standard cielo panoramic glass roof that floods the interior with light when you retract its electric blind. And it's a cabin well built enough to justify the premium prices being asked. Brushed aluminium and shaded lacquers blend with expensive soft-touch materials and metallic trim around the dash and there are plenty of hi-tech touches like the Head Up display that projects key driving information onto the bottom half of the windscreen so you don't have to take your eyes off the road. There are plenty of practical touches too, with endless cubbies, drawers and pockets collectively offering up to 22-litres of extra oddments space. 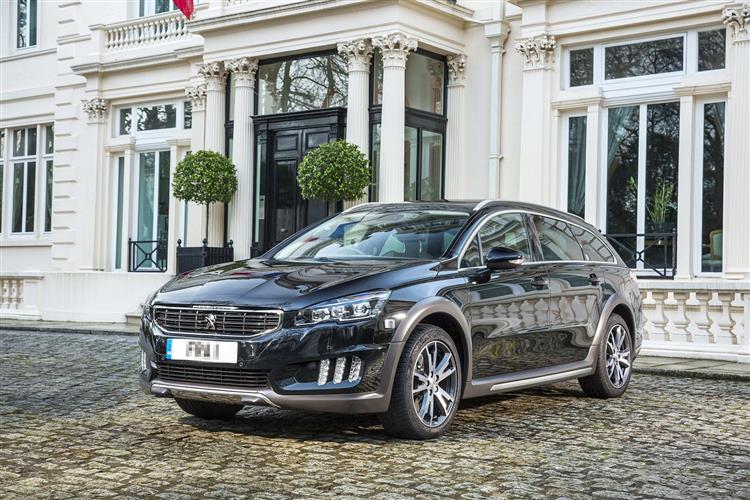