The sixth generation version of Ford's Fiesta van which sold between 2009 and 2018 was aided, like its predecessors, by a platform based on the brand's great handling Fiesta supermini. Obviously, the carrying capacity isn't huge but if that's not an issue, this could be a great little good value urban delivery runabout.

We've had Fiesta van models in the supermini-derived van market since 1976. By 2009, it was time for the sixth generation version and, like its predecessors, it competed most directly with the Vauxhall Corsavan and, to a lesser extent, with supermini vans from Fiat and Peugeot. Once upon a time, the small van market was completely made up of supermini-derived models like this one but in recent times, most buyers have been drawn towards purpose-designed small vans that aren't constricted by passenger car styling and so can offer much larger carrying capacities without taking up any more road space. Ford's Transit Courier (also Fiesta-based and launched in 2014) is a good example, as are models like Citroen's Nemo, Peugeot's Bipper and Fiat's Fiorino. If you really need carrying capacity, models like these are a better bet - but then, if you really need that, should you really be considering a very small van in the first place? If having considered that, you conclude that your needs are less cubic capacity-orientated, then this MK6 model Fiesta van might prove to be a very effective used LCV choice.

What You Getword count: 308

A payload range from 490kg to 515kg (significantly more than a Peugeot 207 van but a little less than a Vauxhall Corsavan) gives customers a competitive option for transporting their products. The rear side windows are replaced by body-coloured solid panels, and the rear passenger seats have been removed to provide a load box area of 1,000 cubic litres, with a maximum useable load length of 1,296mm, as well as a maximum load box width of 1,278mm (1,000mm between the wheel arches) and a height of up to 806mm. The styling of this MK6 Fiesta van will win it many admirers and operators looking for a compact van that will cut a dash on the city streets will like the wedge-shaped front end as well as the curvy rear. There was also a Sport Van variant with a more dynamic body kit. The cabin is similarly avant-garde in its design, with a dashboard control interface based around that of a mobile phone and a clever choice of quality materials. In terms of practicality, you won't be buying a supermini-derived small van if interior space is everything. That point made, it's also worth saying that this Ford does at least enable its owner to make good use of the space that is on offer. DIN-compliant tie-down hooks are standard but if you forget to use them - or simply can't - then a half-height composite bulkhead is standard to prevent loose items from sliding forward and joining you in the front. Running costs are always of great interest to business users and they're essential reading for fleet managers who see slight differences in these figures compounded over a whole fleet. Both diesels return a combined fuel economy figure of 67.3mpg with impressive CO2 emissions of 110g/km. The petrol variant manages 49.6mpg on the combined cycle and 133g/km of CO2. 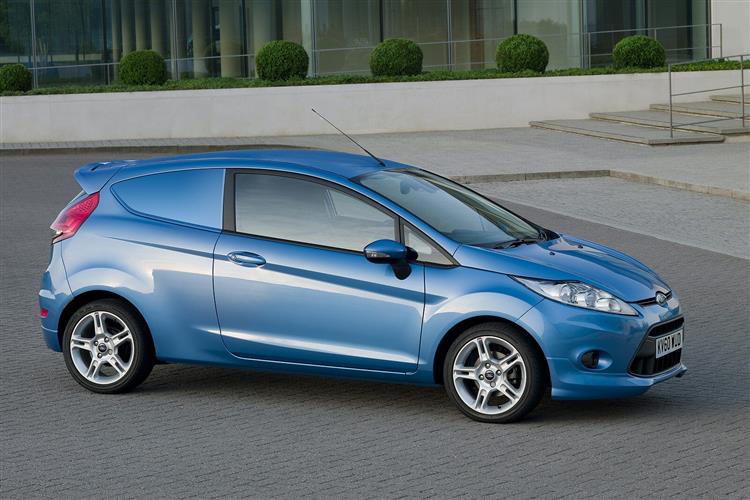