HOW TO EVOQUE MEMORIES (some text hidden)

How do you right a best seller? That was Land Rover's problem when in 2015 it came to improving its runaway success story, the Range Rover Evoque, a car that by then accounted for a third of the brand's total sales. It's a fashionable, yet capable proposition that fundamentally changed the premium mid-sized SUV market and when this facelifted version was introduced, rivals had to contend with an evolved design featuring a more efficient range of diesel engines, extra technology and even, uniquely in this sector, the option of a Convertible body style. Does it all add up as a used buy? If you want a fashionable used SUV of this kind, is this the one to beat?

It's getting on for half a century since all-wheel driving was revolutionised by the Range Rover, a car now a class apart in the luxury 4x4 sector. But what would that model look like re-invented in smaller form for very different Millennial times, an age in which fashion and frugality are as important as toughness and traction? Something like this we think, the Range Rover Evoque, the first generation version of which was rejuvenated in much improved form in 2015. It's that facelifted car we look at here as a used buy. The Evoque's original launch back in 2011 represented a watershed moment for the Land Rover brand every bit as important as the arrival of the original Range Rover in 1970, the Discovery in 1989 and the Freelander in 1997. To survive, the marque knew it had to reach the younger buyers fuelling the spectacular rising sales of Crossovers and small SUVs. That meant the need for a fresh, very different compact model that would reflect a radical change in design, hence the futuristic LRX concept car from which the Evoque was developed, before being launched to a rapturous reception. By 2015, over 450,000 examples of this model were pounding global roads - but the competition was hotting up. By now, all the prestige brands had piled into this profitable segment and cars like the Lexus NX and the second generation BMW X1 were being targeted directly at Evoque buyers. This baby Range Rover didn't have to be as spacious as contenders like these, given its positioning in Land Rover showrooms alongside the company's practical 7-seat Discovery Sport model. What it did need though, was a more class-competitive diesel engine and that was duly delivered in 2015, with the more efficient Ingenium 2.0-litre TD4 unit plumbed in beneath the bonnet. And the company went further as part of this facelift package. Having shaken up the style expectations of buyers in this sector with the original version of this car, this MK1 Evoque could, from its mid-life point, offer the world's first SUV Convertible bodystyle, the first such model the brand had ever made. Here though, we're going to focus on the conventional version most used buyers will want. It sold until late 2018, when an all-new MK2 model arrived. What You Pay

Not many cars make it from concept Motorshow prototype to production reality without being significantly watered down - but this was one of them. We first saw what was then called the LRX in 2008 and the Evoque model it then became is as arresting to look at now as it was back then, whether you opt for the Five-Door bodystyle or the Coupe or Convertible three-door versions.. Most Evoque buyers are going to want one of the hard-top variants - probably a Five-Door version, a derivative that in post-2015-era guise got the eye-catching vents in the clamshell bonnet that were previously restricted to the Coupe model. As for the changes made inside this facelifted Evoque, well basically a lot of little things added up to quite a lot. Revised interior door casings featured re-profiled armrests. And the instrument binnacle you view through the three-spoke leather-trimmed multi-function steering wheel was re-designed with clearer dials. The key cabin feature though, lies in the centre of the dash. At last in 2015, Land Rover delivered a state-of-the-art infotainment screen to its volume buyers. The 8-inch 'InControl Touch' display is clear, easy to navigate around and very informative. In the rear, the shallow side windows create a bit of a 'hemmed-in' feel but overall, the space on offer is surprising when you consider the rakish roofline and the fact that this car is shorter than a Ford Focus. With the composite plastic rear hatch raised, the 575-litre space revealed in the Five-Door model is 114-litres less than you'd get in the boxier Discovery Sport. A glance at rival model stats though, reveals that this still means you get a slightly more spacious boot than you would in obvious rivals, even those in the BMW X3 and Audi Q5 class. 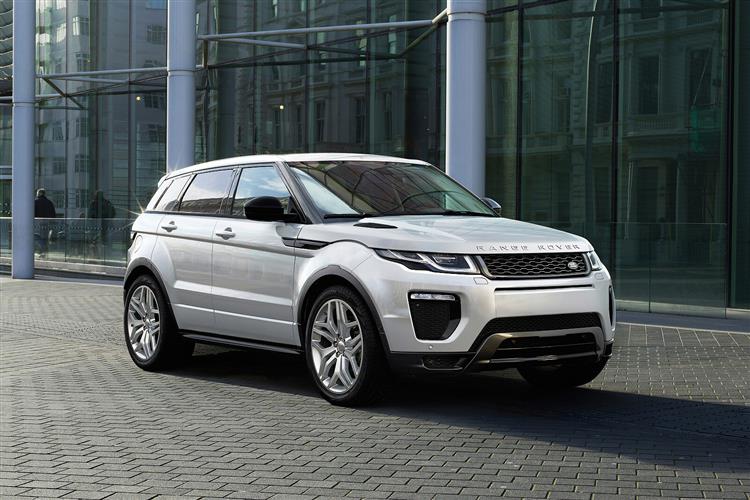