A TRIP THROUGH SANTA FE (some text hidden)

Hyundai is increasingly offering some very high quality cars and one of them was this third generation Santa Fe large SUV model, launched in 2012. Crisply styled, well equipped and powered by a punchy 197PS 2.2-litre diesel engine, it offered a choice between five or seven seats and two or four-wheel drive. It was an SUV for people who probably never thought they'd drive an SUV. A Hyundai for those who probably never thought they'd drive a Hyundai. In short, a car that promises to surprise you.

Look at a car like this, Hyundai's third generation Santa Fe SUV, and you get some idea of just how far this South Korean brand has come in recent years. This, after all, is the kind of quality product that has driven the improvements in its recent fortunes. The Santa Fe has had a big role to play here. Looking back, it was the launch of the MK2 version of this car in 2006 that really put Hyundai on the map. Not only was it beautifully built - it also had beautiful market positioning, this the first affordable SUV to blur the boundaries between the compact Freelander/RAV4 class and the family Discovery/Shogun segment. So Santa Fe buyers paid compact sector prices but got the kind of 7-seat capacity they'd previously needed a much larger SUV for. No wonder this car became a best seller for the UK importers. Not surprisingly, it's a concept that competitors rushed to copy - including Hyundai's partner Kia, whose Sorento model has basically the same 2.2-litre diesel engine beneath the bonnet. It was therefore important, back in 2012, for this third generation Santa Fe to be able to distance itself from this and other potential rivals, particularly as its pricing had then risen to reflect dramatic claimed improvements in quality and design. This MK3 design sold until mid-2018, when it was replaced by a fourth generation model.

What You Getword count: 640

The Santa Fe is one of those cars that has become progressively better looking throughout its existence. The first generation model of 2001 was a distinctly odd-looking thing, with deeply concave flanks that looked as if it had been reversed into and a rather plasticky interior that could be specified in disturbingly uniform shades of brown. The second generation car that arrived five years later was a massive improvement, with a high quality cabin and a more mature styling treatment, although it lacked a little something in the personality stakes. This third generation car though, hit all the right notes. Here's how. The front end features a big grille and a high pedestrian-friendly bonnet line, with all of the lights and intakes a stylised trapezoidal shape that offers up an agreeably expensive look. Wider aesthetics were apparently influenced by Hyundai's so-called 'Fluidic Sculpture' design language, developed in this car with what the company calls a 'Storm Edge' concept supposed to capture the 'strong and dynamic images created by nature during the formation of a storm'. Moving round to the side, you'll see a sharp detail line that runs through the door handles and gives shape and tension to the flanks, ending up at the rear light clusters. There's also a sharply rising waistline that gives the car the sort of wedgy profile that's more reminiscent of the latest breed of crossover vehicles. There are plenty of neat touches- like the deep doors which cover the side sills to keep them clean so as occupant's clothes aren't soiled on entry or exit. At the back you'll find twin tailpipes and a hexagonal mesh set into the lower sections of the bumper to give it a purposeful look and feel. Jump inside and the good news continues. We're getting used to some very smart Hyundai interiors these days and the Santa Fe doesn't deviate from that script one iota. There seem to be quite a variety of materials used on the fascia but the overall look and feel is attractive, the dash being dominated by a central screen flanked on either side by big air vents. Then you've got stereo and ventilation controls below, with quite a few of these functions replicated on the steering wheel. The four-wheel drive running gear controls are mounted just to the right of the steering wheel. Since the wheelbase of this model is the same as its predecessor, you'd be forgiving for assuming that it's pretty much the same size inside. You'd be wrong. A marginal increase in overall length enabled the designers to conjure up an extra 45mm of middle seat knee-room - and there's 11mm more headroom. It also helps that the three-berth bench can slide backwards and forward to prioritise either space for legs or luggage behind. If you've gone for a seven rather than a five-seater model and have the third row of seating, you'll quickly find that getting to it could be easier. The problem's caused by the fact that the second row seat base doesn't lift up and tumble forward: all you can do is pull forward the backrest - which leaves a rather tight gap through which you have to squeeze yourself. Fine for kids but a little awkward if it's granny being taken for her Sunday trip to the garden centre. Once you're in place though, room at the very back isn't too bad for adults, providing the journey isn't excessively long. On the plus side, those rearmost seats do fold very neatly away into the floor, which means a decent amount of space in the boot when you're travelling in five-seater mode. Luggage space was increased by 37mm in depth over the previous generation model, yielding a capacity of 534-litres with the front five seats upright. Seven-seater models get standard self-levelling suspension to deal with heavier loads. 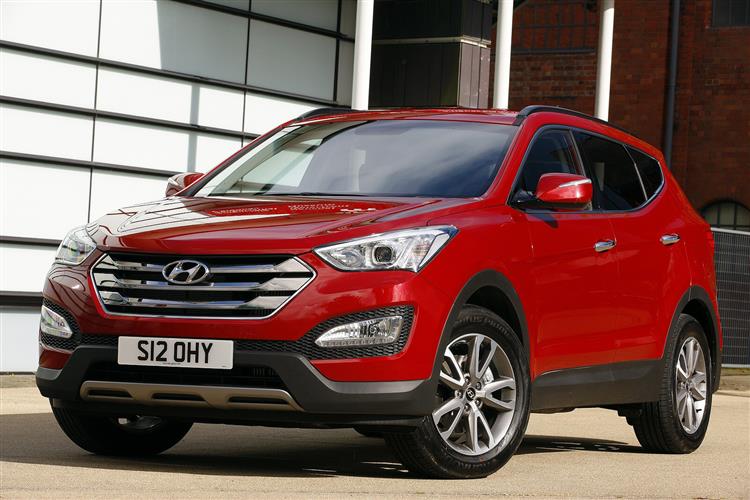