POWERING DOWN THE A45 (some text hidden)

With all-wheel drive and a massive turbo punch, the A45 AMG is the hot hatch giant killer that followers of Mercedes-Benz had long been waiting for. If you want a devastatingly quick hatchback that can do it all, this is where you should start your search.

Just how far can you take a hot hatch? In terms of price? Performance? Traction? Quality? It's an interesting question. In 2013, Mercedes tried to provide us with a definitive answer in this A45 AMG model. There had back then never been a Mercedes quite like this one. The Stuttgart brand's AMG performance division had never previously built a hot hatch - and never previously breathed upon engines as small as four cylinders in size. Historically, it had never seriously dabbled with the brand's most compact A-Class model either, a car about as sporty as a couch potato in its first two generations of life - but very different in this form. The MK3 model had a more dynamic DNA from the very start: this A45 was intended to be the ultimate expression of what it could offer, launched in mid-2013 and aimed at a far younger breed of customer from the AMG norm. An audience impressed by the fact that beneath the sculpted bonnet lay a hand-built 360bhp 2.0-litre turbo unit billed as the world's most powerful four cylinder engine in series production. With 450Nm of torque transmitted to the tarmac via a 4MATIC 4WD system, it threw down a challenge that was tough for the opposition to answer. The car was lightly facelifted in 2015, when it gained 'Mercedes-AMG' branding and an uprated 381bhp version of its 2.0-litre engine. This car sold until early 2018.

What You Getword count: 714

The styling updates that differentiate the A45 AMG from lesser 'AMG'-trimmed A-Class models are actually quite subtle. Too subtle perhaps. So you've got to know what you're looking for in recognising this car. Let us point out some of the highlights. Like the 'twin blade' radiator grille and the cross strut in the front apron, both painted in matt titanium grey. Or the black 'flics' that surround the large cooling air intakes at the sides. They're needed too, for quite an engine lies under the bonnet. No, it wasn't fashioned alongside the big V8s created at AMG's Affalterbach headquarters but like them, it was still hand-built in tune with the company's 'one man, one engine' philosophy on a dedicated production line, this one in Mercedes Kolleda engine plant. You know that because the signature of the engine fitter can be found on a beautiful little plaque on the side of the engine. A lovely touch. And there are plenty of others as you move towards the rear of the car. Like the 18-inch twin-spoke light-alloy wheels which can feature bright red brake callipers. Then there are the AMG side sill panels with their matt titanium grey inserts, a colour also used to trim the rear apron with its highlighted air outlet side openings and diffuser insert. The sports exhaust system's two square, chrome-plated tailpipes are the final things that drivers of lesser cars will see as you flash past. Step across the lovely illuminated AMG door sill panels to take a seat inside and you're bound to like Recaro-style sports seats that are trimmed in a combination of Artico man-made leather and Dinamica microfiber. Another classy touch sees the five SLS-style dashboard air vents in finished in black and red, plus there's a set of red seatbelts which, as any fool knows, are worth a second a lap. Other stuff we like includes the fact that what looks like metal really is. Not so good are the hard plastics down by the centre armrest and the need for a fiddly electronic handbrake. Seek out cars fitted with the optional three-spoke leather-trimmed flat-bottomed AMG steering wheel with its red contrasting top-stitching. And the lovely alcantara trim and cool-to-the-touch silver gearshift paddles. Through the wheel, you glimpse an equally purposeful instrument cluster, with two main chrome-trimmed dials featuring red needles and separated by a central colour display featuring a race timer mode. Anything the colour display can't tell you can probably be found on what looks like an iPad sitting on the upper part of the centre console but which is in fact an integrated infotainment system, able to sync seamlessly with most smart 'phones. Its placement looks like a bit of an after-thought but the screen itself works very effectively, even if you get a car whose original owner paid extra to have all the COMAND Online Media features integrated into it. As for space in the back, well the curve of the rear side windows and the amount that the rear wheel arches intrude into the door openings mean that getting in isn't quite as easy as it would be in, say, a Golf R or an Audi S3 Sportback. Once installed inside though, even a couple of six-footers should be reasonably comfortable, thanks to the scalloped cut-outs at the back of the front seats. We wouldn't though, put too much store in Mercedes' claim that this is a five seater, a statement which seems to be at odds with the way that the cabin at the back has been styled very much to suggest accommodation for two. Three children will probably be fine though. And the boot? Well once you've managed to lift the heavy tailgate, you'll find that the stylised rear light clusters do necessitate a rather narrow opening, but once you get your stuff inside, you'll find 341-litres with the rear seats up or 1,157-litres with them folded. That's a little less than most rivals offer, but not by enough to matter very much. It is a pity though, that the rear seats don't fold completely. Still, on the plus side, items more than a metre wide can fit between the wheel housings and you do get some extra space beneath the boot floor to keep valuables away from prying eyes. 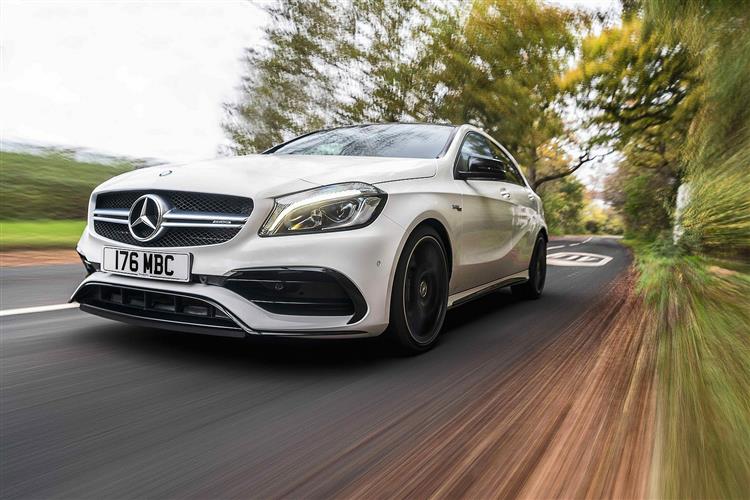