Families seeking space, versatility and low running costs from their next used mid-sized MPV have a ready-made candidate in the form of Peugeot's Partner Tepee. This revised post-2015-era Euro6 version was further distanced from the basic commercial roots of earlier Partner passenger-carrying models by smarter styling, more equipment and the hi-tech option of more efficient BlueHDi diesel engines. As a result, this value-for-money five or seven-seater is a vehicle that demands to be taken very seriously indeed by savvy family buyers browsing in the used market.

So, would you buy a van-based mini-MPV? Once, not very long ago, the idea of strapping your offspring into the back of something designed for parcels and plumbing equipment seemed a little odd but, as with so many things, time has brought much greater acceptance of the idea. It helps of course that the product has become much more car-like. Take, as an example, this much improved post-2015-era Peugeot Partner Tepee. This was Peugeot's version of Citroen hugely successful MK2 model Berlingo Multispace, so even if you haven't heard the name before, you can rest assured that you're buying into a well established product. This one's better known as a commercial vehicle but it's also quietly sold in reasonable numbers for Peugeot in this passenger-carrying guise, those van-based roots meaning greater practicality and significantly lower prices than more car-like and conventional compact MPVs like the French brand's own 5008. Peugeot launched this Partner Tepee model in 2008, then updated it in 2015 to create the vehicle we're looking at here, which targeted other mid-sized van models like Ford's Tourneo Connect, Fiat's Doblo and Volkswagen's Caddy Life as well as its Citroen Berlingo cousin. To better compete, this improved Euro6 design featured a package of enhancements including extra equipment, a slightly sleeker look and more efficient BlueHDi diesel and PureTech petrol powerplants. The Partner Tepee sold until mid-2018, when it was replaced by the Peugeot Rifter.

What You Getword count: 517

This improved post-2015 Partner Tepee model got what Peugeot calls a more 'assertive' design, with the front end emphasised by a chrome-framed grille with the Peugeot lion at its centre. The car got a re-styled front bumper too and the result, the designers hoped, was a greater sense of robustness. Let's consider boot space. Provided you haven't got yourself a Partner Tepee whose original owner filled this area with the two extra sixth and seventh seats that came with the optional '7 Seat Pack', then the cargo area is vast. With the rear parcel shelf in place, a total of 675 litres is available and that rises to 1,350-litres if you load to the roof. If you want to extend that, you can fold down the second row backrests - and do so in individual stages, provided you've got yourself a version fitted with three individual row two chairs. That'll give you 2,650-litres of space. If you're in a removal van state of mind, you've the option of taking out the second row seats completely, assuming you're strong enough of back and you've a garage to store them in. Do that and a potential load space of 3000-litres means your Partner Tepee could swallow four washing machines. And you can release even more space if you flatten the fold-forward front passenger seat, something that might enable really long items to be carried - a kayak for example. Time to talk about the experience you get behind the wheel, which is where the contrast between this modern Partner Tepee and the utilitarian original is probably most marked. The early version's spartan wipe-clean black plastic is replaced in top second generation variants by softer-touch surfaces that combine with the smarter seat material and dashboard trim of this revised model. There was also with this improved design the potential for most of the kind of hi-tech features that a more demanding modern family might these days want. Take the top-spec version's 7-inch touchscreen and DAB audio system, which came with the option of a satellite navigation system. Talking of interior storage brings us to what is probably our favourite feature in this car - the optional Zenith roof which offers up to 94-litres of ceiling-mounted space in an ingenious central storage area featuring four large, light-loving glass panels. The second row offers enough space to suit a wide variety of passenger shapes and sizes. Try and find a car fitted out with the three individually folding, tilting and removable rear seats that we'd say are pretty essential to the whole Partner Tepee experience. You get them with the top 'Allure' trim level. If you've opted for lesser 'Active' spec though, you'll only get a basic bench - unless you find a car whose original owner paid extra for that '7 Seat Pack' we were previously talking about. Its individually folding, tilting and removable chairs can recline for greater comfort on longer journeys, or, if there are only two of you, it's possible to fold forward the backrest of the centre seat to create a picnic table with built-in cup holders. 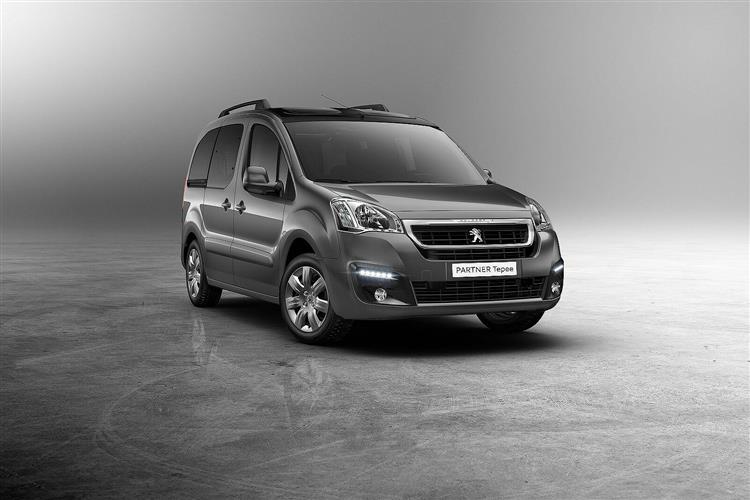