If you think the big three prestigious German brands have the Executive car segment sewn- up, a drive in Jaguar's second generation 'X260'-series XF may be enough to make you reconsider. Even in the face of tough competition from rivals like the BMW 5 Series, the Mercedes E-Class and the Audi A6, this car offers a compelling range of virtues, being more spacious than its 'X250'-series predecessor and with greater levels of quality and connectivity. Perhaps most significantly, this MK2 model's aluminium-intensive architecture provides for weight savings that have delivered sharper handling and class-leading efficiency. In short, it's a very complete package.

Can any auto maker's future hinge on the fortunes of a single model? History suggests so. Take Jaguar's XF. The original version, launched back in 2007, transformed the way people thought about this prestigious British brand. Smart, rakish and sophisticated, it referenced the future at a time when the company's other models were still steeped in the past. And set the tone for a fresh, stylishly dynamic period in the company's history that's since brought us not only more luxury saloons but also sportscars, estates - and even an SUV. All of these models were fundamentally new in a way that, back in Jaguar's old Ford-owned era, the original 'X250'-series MK1 model XF could never be. Hence the need for the MK2 'X260'-series model we look at here as a used buy, launched in 2015. This design might not look very different from its predecessor at first glance. Yet a styling evolution hides a product revolution, this MK2 model being lighter, more efficient and more packed with technology, an improvement on its predecessor in every possible respect. Slightly more compact dimensions disguise a longer wheelbase that allowed the hi-tech aluminium-intensive architecture to clothe a much more spacious cabin, especially for rear seat folk. What didn't change was the XF's remit as a more sporting, dynamic choice in the full-sized Executive segment. To put that in competitive context, it's more BMW 5 Series than Audi A6 or Mercedes E-Class, though buyers of all three of these cars should be tempted by this model's cutting-edge cabin technology and class-leading efficiency figures. This car was launched with jaguar's older petrol engine technology, but a range of Ingenium petrol units soon joined the range, to go with the Ingenium diesel available from the start. An AWD option was introduced in January 2016. A Sportbrake estate body style was added to the range in 2017, as was a 300PS version of the Ingenium petrol engine.

From almost any angle, you'd know this was a Jaguar. You'd know this was an XF. It's a very different one though, in ways you simply won't appreciate if all you offer this car is a cursory glance. The sweeping coupe-like profile that defined the original model evolved here, the roofline lower, the rear deck longer and higher. We should talk about the dimensions too. Think it looks a little smaller than the old 'X250'-series design? You're right, it is. Jaguar knew this second generation model had to be more spacious inside, but that didn't mean the car itself had to be bigger. Hence the slightly more compact shape. It's 7mm shorter and 3mm lower in MK2 form, yet at the same time, more length was freed up between the wheels thanks to shorter front and rear overhangs. That means a substantial 51mm wheelbase increase that gave the designers a proper shot at addressing the biggest issue that owners had with the first generation version of this car: it's very restricted rear cabin space. Sure enough, there are massive improvements here, with 15mm more legroom, 24mm more knee room and 27mm more headroom than before: it all made a huge difference. A seat in the front of an XF has always been a special experience. With this MK2 model, the brief was to retain that sense of occasion but mature and simplify the design language a little. So there's a classier, more modern look as Jaguar's designers have sought to find more interesting and contemporary ways to say 'luxury': largely, their efforts seem have worked. The rising circular gear selector remains on automatic models: so do the cartwheeling air vents, though they've here been reduced in number and thrown to the edges of the cabin, with the centre of the fascia freed up for an 8-inch 'InControl Touch' infotainment system. As you look around, the height of the waistline and the centre console gives the safe, driver-focused feeling of being sat in the beautifully supportive leather seat, rather than on it. At the same time, the strong horizontal theme of the instrument panel, the layering of it and the materials used for each layer creates the kind of rich, luxurious, hand-crafted ambience you just don't get in this car's Teutonic rivals from this era. Do the shorter rear overhangs necessitate a smaller boot? Actually no - quite the reverse is true. Lift the lid and a 540-litre space is revealed, a 40-litre increase on the previous model accessed via a larger aperture than before. 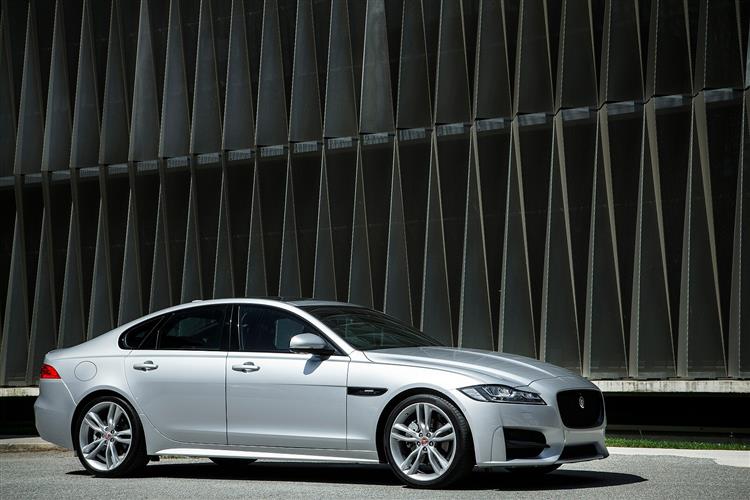