IT'S GRRRRR 8 (some text hidden)

Ambition can be a dangerous thing but through the late nineties and early noughties, it seemed to be propelling Audi to greater and greater feats of expansion. The marque which had previously played third of fourth tambourine to its illustrious German rivals BMW and Mercedes-Benz was on the march but just how far was it prepared to go? The new models kept coming but it was the R8 that really showcased the scope of the desire burning within Ingolstadt. Audi had built a supercar.

Behind Audi's dramatic growth from manufacturing three models lines in 1990 to being well into double figures by 2007 was the guiding hand of the Volkswagen Group. Audi was being groomed as a direct rival for BMW and Mercedes-Benz in the premium car markets and had become that by the time the R8 came onto the scene in October 2006. A supercar to shine its illustrious light down on lesser models in the range can be of real benefit to a brand like Audi but the costs associated with developing a convincing one are huge. Fortunately, the Volkswagen Group already had a formidable mid-engined supercar on its books in the breathtaking shape of the Lamborghini Gallardo. With four-wheel-drive and a cabin heavily reliant on Audi switchgear, the Gallardo was a perfect option to form the basis of the R8. Audi was always at pains to emphasise the differences between the two cars and that workers at its subsidiary company quattro GmbH fitted over 5,000 unique parts by hand to each car but the links to the Gallardo became common knowledge and did the R8 the power of good, primarily because it was £60,000 cheaper. In the interests of keeping the R8 pricing accessible and preserving the Volkswagen Group brand heirachy, the R8 was launched with Audi's 4.2-litre V8 engine 414bhp. It took until 2009 for the car to get the 5.2-litre V10 that powers the Gallardo and then it was in 518bhp guise where the Lamborghini by that stage was available with as much as 552bhp. The formidable V12 TDI diesel R8 was unveiled at the 2008 Geneva motorshow.

One of the most fascinating things about the R8 is its complex, unorthodox shape. Viewed in profile, it's not conventionally beautiful, looking a little stretched and with some strange design features such as the awkward ridge at the rooftop and the rather weak looking haunches. Move around the car and the shape improves with front and rear three-quarter views looking especially muscular. There are many details to soak in. The side blades which channel air to the engine come in many different colours and finishes. Look closely at the headlights and you'll see an R8 logo etched into the main beam reflector. The twelve LED running lamps that rim the light pod look particularly menacing when looming out of the darkness. This was a feature that first appeared on the R8 but was rolled out across the Audi range. The engine bay is beautifully displayed and the interior is an object lesson in how to package a two seat car with plenty of space, decent visibility and fantastic Audi build quality. The monoposto fascia sweeps from door handle to door handle in a broad arc, encompassing the main dials and information system. There's room in the front boot for a couple of squashy bags and there's also a slot behind the seats but the R8 is otherwise not long on luggage space. 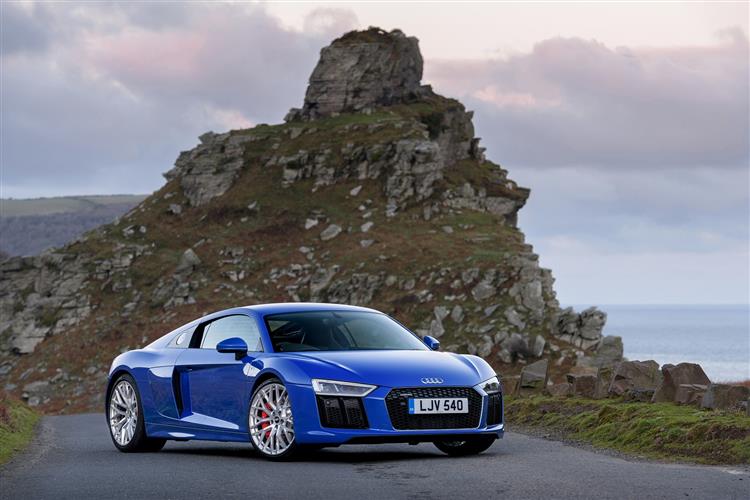