JETTAZONE YOUR PRECONCEPTIONS (some text hidden)

Volkswagen's sixth generation Jetta was improved in 2014 to make it smarter and cleverer, offering customers a different alternative to the Golf hatch. With this saloon, you get a huge boot and rear passenger space almost able to rival the larger, pricier Passat. Does it make sense as a used buy?

Volkswagen's Jetta. It's a Golf with a boot isn't it? Well yes and no. In more recent years, the Wolfsburg brand has sought to give this car more of its own identity, a trend that continued with the updated version of the sixth generation model that the brand announced in 2014. The Jetta has always sold to people who couldn't quite stretch to either Volkswagen's larger Passat saloon or a BMW 3 Series or Audi A4-sized compact executive sedan. And it has always been a relatively rare sight on our roads: most buyers here in search of a car of this size would rather have the hatchback versatility of a Golf. American and Mediterranean customers see things differently though and these markets have combined to make this one of the world's most popular saloon models, with over 14 million units sold since the very first Jetta was launched back in 1979. The US in particular has been a happy hunting ground for Volkswagen, this car having long been the brand's most popular Stateside model. American buyers still snap up over 110,000 Jettas every year, with college kids attracted by endorsement from singers like Katy Perry and cheap pricing made possible by the close proximity of this car's Mexican assembly plant. In order to sell the same design for nearly twice as much money in Europe, Volkswagen plushed up those cars heading across the Atlantic and added in the Golf's more sophisticated multi-link rear suspension, plus electric power steering, a better quality cabin and subtle styling changes. This would have been a clever and very profitable strategy if it had worked, but sales of the early version of this sixth generation model were slow from its original launch here in 2011. Hence the need for the significantly revised version we're going to look at here, launched in 2014 with smarter looks, an upgraded cabin, extra safety features and revised engine range. Volkswagen hoped all of this would be enough to get this Jetta's core values noticed: its refinement, its long distance comfort and the fact that nothing in the class can offer anything like as much luggage space. It wasn't and the car was quietly withdrawn from sale at the end of 2017. 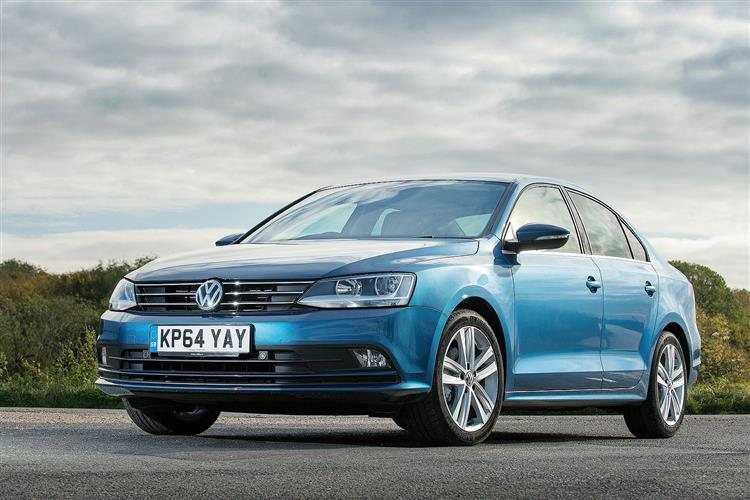