This fourth generation C-Class set out to really democratise Mercedes luxury for a wider audience at its launch in late 2013, lighter, cleverer, nicer to ride in and beautifully finished. True, pricing still reflects its premium positioning but in this guise more than ever, this more efficient, more desirable design has a look and feel worth every penny. A cut above its BMW 3 Series and Audi A4 rivals? Many will think so.

The C-Class has traditionally campaigned in offering all that its brand knows about luxury saloons distilled into smaller form and in its first two decades of life, over 8.5 million global buyers happily bought into the concept. For all that though, this was in truth for too many years a car a little short on quality and a little long on price tag. It may have been good enough to account for 20% of total Mercedes sales but that wasn't enough to prevent it still always lagging a distant third in the compact executive sector sales charts behind its arch-rivals, BMW's 3 Series and Audi's A4. In late 2013 though, we got a very different C-Class, this fourth generation version designed to change the status quo in this segment and redefine what a car of this kind should be. That was a big ask, but it was clear from the beginning that this '205' model series C-Class had a greater focus than its predecessors. These predecessors were often trying to be too many things to too many people. If you bought one, it was usually for a 'quality feel' rather than because it was the best contender in its segment to drive, the nicest to sit in or the cheapest to run. The MK4 C-Class model though, was a small Mercedes for BMW and Audi to take seriously. In the 2014 to 2017 period, it was to this car that aspiring middle management executives most often turned in their search for something different from - and possibly a bit nicer than - their usual 3 Series or Audi A4 choices. There was certainly more than enough reason for them to seriously consider this car. It's slightly bigger than the previous generation design, a lot more advanced and boasts the nicest cabin you can have in this kind of model. But more important than all of that is the way an advanced hybrid aluminium structure brought the significant weight savings which made possible some of the lowest running costs in the segment. This then, is the C-Class that BMW and Audi always feared Mercedes would build. Over the first few years of this model's production life, Mercedes gradually introduced more and more customer choice. A diesel/electric C300h hybrid debuted in 2015 and shortly afterwards, we saw a petrol/electric C350e Plug-in hybrid model. The 2015 model year also saw the introduction of two petrol-engined Mercedes-AMG variants, the V6 C43 4MATIC and the V8 C63. Coupe and Cabriolet body styles followed in 2016, but our focus here is on the saloon and estate variants that were produced before the range was significantly facelifted in the Spring of 2017. 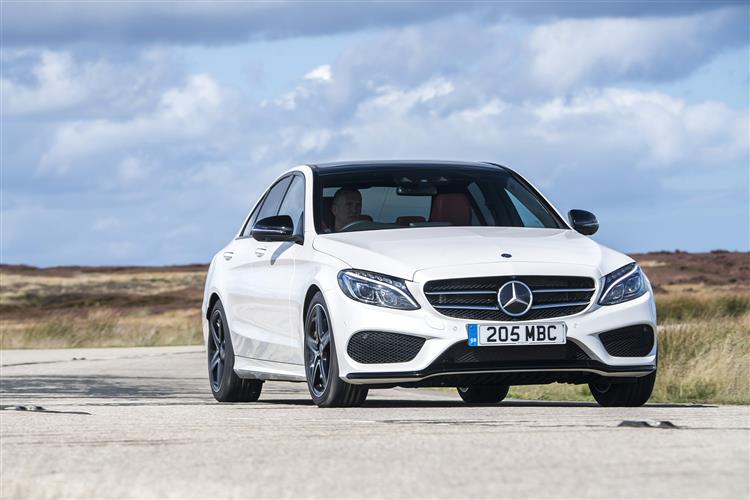