Nissan's 370Z isn't only a proper sportscar, it can be a proper roadster too. On the used market, its combination of speed, style and sheer fun is very difficult to beat for the money.

In the eyes of many, proper sports convertibles are a dying breed these days, especially those that remain affordable. They've been sometimes ruined by weighty metal folding hoods and intrusive electronics. They've become accessible to anyone who can afford their inflated price tags, yet truly satisfy no one with a deep-seated petrol-through-the-veins passion for driving. They have, in essence, become soft in heart as well as roof. Everything in fact, that this car isn't: Nissan's 370Z Roadster. With Z-car heritage going back nearly half a century, the coupe version of this model is the definitive Japanese sportscar. This Roadster version though, launched in 2010, is definitive full stop. You simply can't get well over 300bhp, red-blooded sportscar handling and a fabric roof anywhere near this model's relatively affordable price point. Unlike the 350Z Roadster model that preceded it, this soft-top was created as a part of the basic 370z design right from the start, so it's as smart as it's sporty. An enticing prospect. It was lightly facelifted in 2013 and sold until 2015.

What You Getword count: 332

Whereas the drop-top version of the original 350Z Roadster was developed as something of an after-thought (with predictably gawky roof-up results), the design of the 370Z was created with this Roadster very much in mind. Indeed, the coupe shape wasn't signed off by stylist Randy Rodriguez until he could be sure that it would morph gracefully into a convertible. And it does, the broad, curvy rear perfectly balancing the longer, more steeply-raked and now fully automated, self-latching fabric roof that erects or folds in just 20 seconds. Otherwise, the detail on this car is just as gorgeous as on its coupe stablemate. From the arrow-shaped headlamps to the boomerang-shaped tail lamps, there's a handsome aggression that marks this car out from its overtly style-conscious contemporaries. The front air-intake borrows its look from Nissan's GT-R supercar, giving this 370 greater malevolency as it looms in your mirrors with twin aerodynamic fins rising like fangs from its lower lip. Inside the two-seater cabin, it's a big improvement on the plasticky feel of this car's predecessor. The dash, with its hooded dials and lashings of silver trim, is upholstered in a leather-like surface called Sofilez that's tasteful in both look and feel. The roof too, is better done than on the old open-topped 350Z, with high quality lined interior fabric replacing utilitarian vinyl. And then there's the seats, for some reason a little different to those used in the coupe version but since they're slightly more comfortable, we see no cause to complain. What we would have liked to see from a car of this price is a roof you can operate at slow traffic jam speeds and reach-adjustment for the steering wheel. And a bit more luggage space? Well that's always good but this Nissan delivers 140-litres which, though well down on the 235-litres you get in the Coupe version, is about as much as you could reasonably expect from a car of this kind - enough for two people and a weekend away. 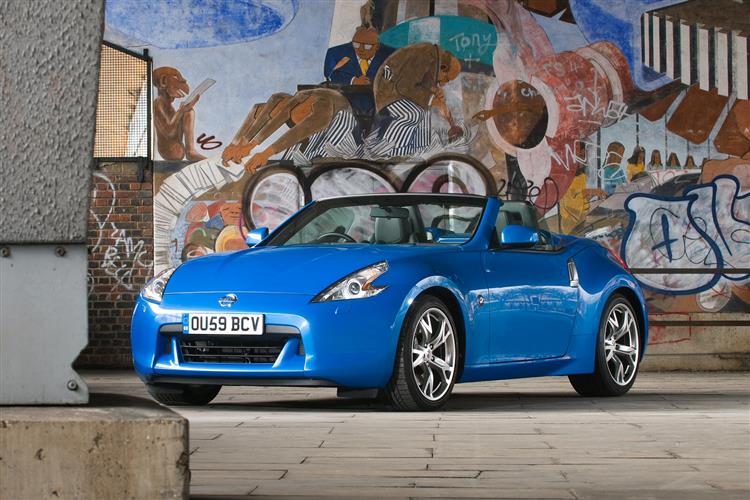