Mercedes' E-Class Cabriolet brought an extra touch of class to the executive drop-top sector at its launch in 2010, sometrhing further refined by the launch of a facelifted version in 2013. This was a very cultured convertible that aimed to set fresh standards for comfort and refinement in its segment. With impressive built quality, slippery aerodynamics and efficient engines, it's now a tempting used car package for those wanting a drop-top to use all year round.

Back in 2010, this was the E-Class Cabriolet model we'd seen since Mercedes axed the W124-series range in the mid-Nineties and rather misguidedly replaced it with the slightly smaller C-Class-based CLK. Desirable though that car was, especially in Cabriolet form, it didn't ever really feel special enough to justify the premium Mercedes wanted to charge over equivalent BMWs and Audis. This one though, was equipped to put things right. So whereas a rival BMW 3 Series Convertible or a Audi A5 Cabriolet from this period is full of bits you'd find in a Sales Manager's compact executive saloon, this similarly-priced E-Class Cabriolet is, well, an E-Class, a car that in saloon form hails from the more exalted fully-fledged Executive segment. This car was significantly updated in 2013 to create the model we're going to look at here and the car sold until the Autumn of 2017 when it was replaced by a second generation design.

It's a cabriolet, so let's start with the roof. Like Audi, but unlike BMW, Mercedes here resisted the temptation to fit one of those trendy but heavy folding metal roofs, instead settling on a multi-layered, acoustically-tuned, heat-insulated 23.5mm-thick fabric top, the most advanced the brand had ever used and one that, it's useful to know, should defeat the most rigorous efforts of any automatic car wash. Activate the button neatly housed in a small pod between the seats and it'll retract and site itself neatly beneath a smart tonneau cover in just 20 seconds at speeds of up to 25mph, so yes, you can do it at lights or in start-stop traffic. Of course the downside of retracting the roof is the way it'll then happily munch its way through your available bootspace, reducing the 390-litre figure to as little as 300-litres, which will restrict you to overnight bags on a weekend away, unless you're prepared or able to use the rear seats as luggage space. You might expect more from a model supposedly based on a larger car than the ones that sired rival Audi A5 or BMW 3 Series cabrio models but the truth is that though this Mercedes is full of E-Class bits (and 46mm longer than the CLK it replaced), its wheelbase is no larger than the smaller C-Class. So the cabin is no bigger than its rivals either. Still, it remains a comfortable adult four-seater - and that's rare enough in Cabrio land. Take a seat behind the wheel and it all feels properly premium as Mercedes' traditional 'belt butler' hands you your seatbelt over your shoulder on an extending arm, a nice little touch that really sets the tone for this car. The comfortable front seats are positioned a touch lower than those in the E-Class saloon, in an effort to provide a sportier driving atmosphere enhanced by the enclosed feeling you get from the comparatively high waistline, though this does restrict your sightlines a little when on the move. Otherwise, it's a beautifully designed and finished cabin in every way. 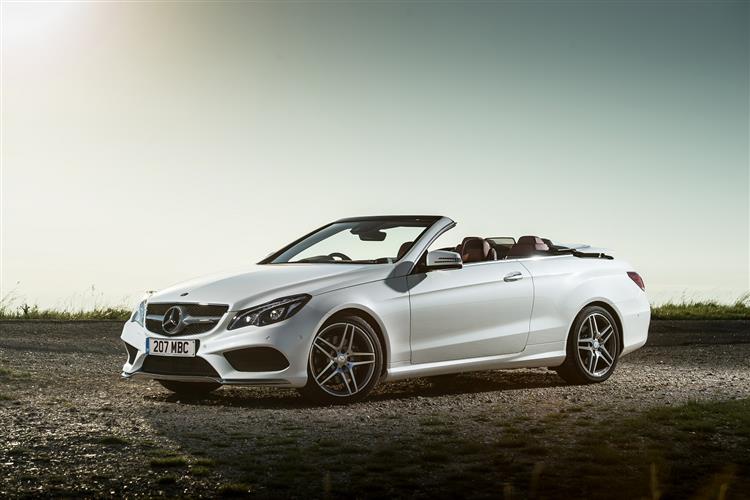