Nissan tried to move the second generation version of its British-built Note model more towards the conventional supermini sector but it was still more of a supermini-MPV, which was no bad thing. Better quality, sharper styling, interesting safety gear and the option of a fascinating supercharged three-cylinder engine were highlights of this MK2 model. Does it stack up as a used buy? Let's find out.

As the small car market becomes more diverse, the definitions between its various niche segments become more difficult to tie down. Here's a case in point, Nissan's second generation Note. The original MK1 version of this car was launched in 2006 to pioneer a new category of super-small people carriers - so-called supermini-MPVs. Which was fine for Nssan all the time that alongside the Note, the brand had its Micra to hoover up supermini sales. That wasn't really the case when this MK2 model Note was launched in 2013. That was a time when the fourth generation Micra model of the period was no longer being considered as a credible Fiesta, Clio or Polo supermini rival. With a MK5 Micra still four years away, Nissan decided to re-position this second generation Note as more of a supermini in order to fill the gap. Today of course, it doesn't matter much how Nissan originally tried to classify this car. What's important is what it offers for the money - and on paper, that's quite a lot, the idea with the Note being to effectively create two cars in one. So you get the pricing and driving dynamics of a Ford Fiesta-style supermini: and the roomier cabin and intelligent interior packaging of a Ford B-MAX-style supermini-MPV. Other brands have claimed this kind of thing in the past - Honda tried to do it with their little Jazz - but here, with extra space, greater comfort, new technologies and a more sophisticated driving environment, we seem to have a design that fits the bill a little more convincingly. A small car that's less limited by its smallness than almost any we can think of. This second generation Note model was phased out in early 2017.

What You Getword count: 863

Previous generation Note models looked neat but rather anonymous. This MK2 model though, is a touch more eye-catching, thanks in part to a roof height lowered by 20mm to try and give it a more stylish, supermini feel. At the front, you'll spot a distinctive chrome grille that seems to take a bite out of each headlight, the nicely chamfered wheel arches and the detail lines in the flanks that help avoid a slab-sided look. Nissan calls this the 'Squash Line' because it was apparently inspired by the angles a squash ball takes around a court. There's not too much squashing going on inside. On the contrary, this is arguably the roomiest small car you can buy from this period - and yes, in saying that, we're including in that consideration Vauxhall Meriva and Ford B-MAX-style supermini-MPVs, as well as the conventional Fiesta-shaped superminis Nissan says this car is supposed to compete with. In fact, you get an idea of what's to come as soon as you pull back doors that open to an uncommonly wide 90-degree angle for easier entry and exit. Inside, it's very spacious for rear folk. Though the seat backs don't recline, the whole bench does slide back and forth, providing you avoid entry-level trim. It also offers a centre armrest with hidden cupholders and if you push the thing right back, you'll find yourself with an enormous 639mm of knee room - more even than you'd get in a huge BMW 7 Series luxury saloon. Of course, you won't always need all of that, so the bench has 160mm of fore and aft travel and even with it pushed right forward, it's possible for two 5ft 10-inch adults to sit in reasonable comfort. Either way, it should be possible to find the perfect compromise between space on offer for people and the packages they must carry behind. On that subject, what about the cargo bay? It's accessed via a rear end characterised by an up-swept C-pillar that combines with smart wraparound rear light clusters. Lift the light tailgate and with the seat pushed right back, there's still 325-litres on offer, 20% bigger than a Fiesta or a Corsa from this period and 45-litres more than the MK1 Note model could offer. Push that bench right forward and the figure rises to 411-litres, way more than you'd get from a Focus-sized family hatch from the next class up. You can really use this space too: there's a deep space beneath the boot floor and, on models with the sliding rear bench, a Flexi board multi-level panel that can be used to divide the load area and stop shopping bags from rolling around if you haven't attached them to the two hooks provided. If you do need more space, then pushing forward the 60/40 split-folding seatbacks can free up as much as 2,012-litres, a figure no other compact car from this period can match. And up front? Well the driving position is quite high-set and supermini-MPV-like in style while surrounding you with trim and design that, despite the brand's protestations of trendiness, errs very firmly on the sensible side of stylish. To be fair, you can see that some efforts have been made here - the glossy black centre stack with its trendy circular climate control console looks fashionable enough - but you'll mostly look in vain for soft-touch plastics and splashes of chrome. Still, it's a practical cabin which makes up for its small door pockets with plenty of cupholders and a double-deck glovebox that neatly shuts away devices you might have connected to the USB and aux-in sockets you'll find there. Overall build quality from the UK factory in Sunderland seems strong and the materials should certainly be hard-wearing. This being the second generation Note, you'd have thought that the designers would have got round to providing the kind of fully adjustable steering wheel that almost every other maker offers across its range. Sadly not. It can move up and down but not in and out. Which can make getting comfortable difficult if you're in an entry-level variant also lacking a height-adjustable driver's seat. Through the three-spoke wheel, you glimpse a neat set of instrument dials with a floating-style digital display in the centre, a layout which offers the option of switching on various coloured lighting-driven eco functions that monitor the efficiency of your driving. Plusher models get a dash dominated by the larger 5.8-inch screen of the NissanConnect navigation and communication system. As well as operating the usual audio, trip computer and Bluetooth 'phone functions, it can tell you stuff like weather, traffic information and fuel prices plus, amongst other things, find you the most efficient route, score the green-friendliness of your driving or offer you Google 'Send-To-Car' technology so that you can plan your route on your PC before you go, then forward the instructions on to your Note. Google's Point of Interest search system is also included, as well as access to things like weather forecasts, local fuel prices and flight information. Plus, if you've specified the 'Around View Monitor', this screen will display a 360-degree 'helicopter view' overhead image to simplify tight parking manoeuvres. 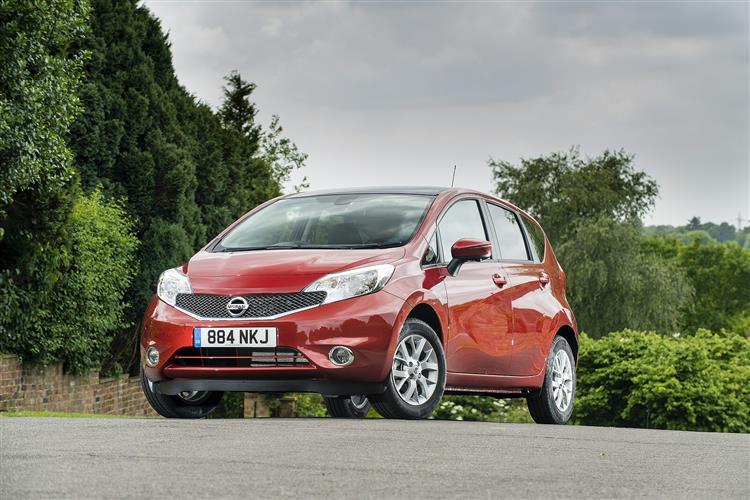