Hyundai wants a more dynamic image. Back in 2015, it didn't quite have the products to back this up, but it paved the way for the really sporty models that were to follow with this car, the i30 Turbo. It's not really any sort of GTi but it did bring a welcome dose of extra image and performance to the MK2 model i30 petrol line-up. Subtle, well equipped and quite as quick as it needed to be, this car showed us a little more of what this Korean brand's successful family hatchback was really capable of.

Not everyone who's tempted by the idea of a hot hatch would actually like to own one. There's the high running costs to consider, the unyielding ride quality you usually get and the unwanted shopping rocket image. If all those things put you off owning a GTi but you still like the idea of a little extra performance in your petrol-powered family hatch, it may be that what you actually want is something like this, Hyundai's i30 Turbo. Back in 2015, the brand's marketers described this variant as being able to provide 'the ride of your life'. If so, then the 'life' in question would have to have been a somewhat sheltered one as this car came with an engine that, while certainly sprightly, was hardly shocking in the performance it delivered. The unit in question, borrowed from the brand's old Veloster sports coupe, was an uprated version of the Korean company's well-proven 1.6-litre GDI unit, turbocharged to boost power to 186PS. Still, power isn't everything and Hyundai told the very few buyers that were interested in i30 Turbo ownership that great efforts had been made to deliver the kind of handling response folk normally simply wouldn't expect from ordinary versions of their mild-mannered i30 family hatch. So there's sports suspension tuning, more direct steering and bigger brakes. This performance model sold until 2017, when the MK2 i30 range was replaced by all-new third generation design. This eventually spawned an i30N hot hatch model direct replacement for this car.

What You Getword count: 701

Hyundai wanted this Turbo model to be a little understated but it still needs to look the part. So the front grille gets a chromed border and there are bespoke LED daytime running lights, along with powerful twin exhausts and lovely five-spoke 18-inch wheels. You also get a lower silver splitter as part of a sports bodykit that includes a neat roof spoiler. The Turbo was the only model offered in the MK2 i30 range to be available in 3-door as well as in 5-door form, but it couldn't be ordered in Tourer estate guise. And inside? Well true, the interior might not quite have the build solidity of a Golf or the flair of a Focus but in some respects, it's arguably a more interesting place to be than either of those cars. Add in this variant's Turbo tinsel - alloy pedals, a red gearknob and red-stitched leather-effect trim for the door panels and the edges of these red and black sports seats - and it feels very nice indeed. Yes, the splashes of metallic brightwork you'll find around the dash may clearly be painted plastic but they've been carefully chosen and the floating silver spines that line the edges of the centre console are stylish and neat. They frame a smart set of ventilation controls - illuminated in a ghostly blue - that have been moved further up than they would normally be on a car of this kind so that they fall to hand more easily and free up extra storage space in front of the gearlever. There are plenty of other cubbies and compartment for clutter too, including decently-sized door pockets that will each take a 1.5-litre bottle. There's lots of room for occupants too: Hyundai boasted of significant increases in leg, shoulder and headroom for front seat occupants when this second generation i30 model was first introduced. Fit and finish from the Czech factory is also excellent - to the point where the soft-touch textures on offer around the dash show a lot of better established brands how it should be done. Only the shiny steering column stalks betray Hyundai's budget brand origins, sitting in stark contrast to the classy excellence of the 7-inch infotainment touchscreen that gets satellite navigation as standard. Through the multi-function reach and rake-adjustable wheel, you glimpse a centre digital information display flanked by two quite deeply cowled but clearly presented dials, each with a smaller integrated circular gauge, in the rev counter for temperature and in the speedometer for fuel. So the instruments are clear - and so is all-round visibility - or at least it is to the front and to the side. Glance rearwards and your view is slightly marred by the small, high and narrow rear window. In the rear, the 5-door model is comfortable for two, but much less accommodating for three thanks to a raised centre seat cushion. Still, that's the case with most cars in the Focus-sized family hatchback segment. Three kids should be fine though and if you do have to take a trio of adults, getting them in will be made easier by the way the i30's designers have managed to reduce the size of the central transmission tunnel. Rear passengers will also appreciate the provision of their own air vents, though they might be rather less keen on the rather small side windows. Out back, there's a 378-litre boot. That offers a middle ground in terms of family hatch class carrying capacity. In other words, it gives you about 25% more space than you'd get in a Ford Focus ST but around 25% less room than you'd find in, say, a Peugeot 308 GT. Ultimately though, we're talking here of a cargo area that should be quite sufficient for the needs of most likely buyers, similar in size to that you'd find in key rivals like Vauxhall's Astra SRi, SEAT's Leon FR and Kia's cee'd GT. If you need more room and want to push the rear bench forward, you'll find that instead of the backrest merely flopping onto the seatbase, the rear seat cushion base flips up properly to facilitate an almost flat loadbay with up to 1316-litres of fresh air. 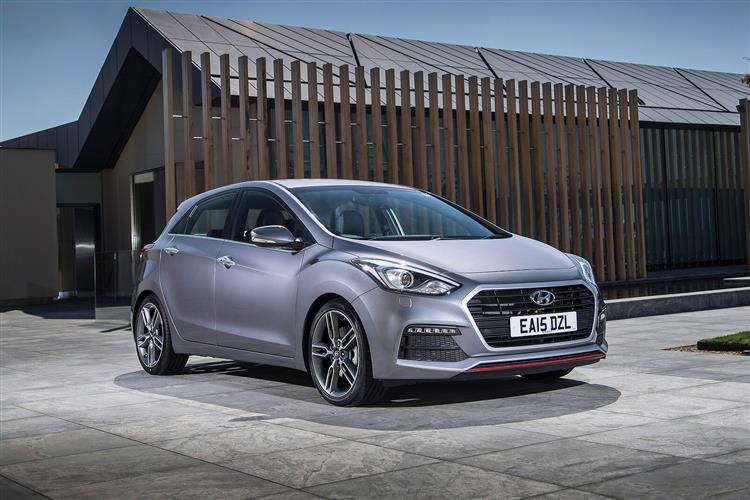