It's the obvious fuel efficient and low emissions solution - a diesel-powered hybrid. First to put one into production were Peugeot with this car, the 3008 HYbrid4, introduced back in 2011. A small but significant band of eco-conscious buyers on the used market could have reason to convince themselves that it commands a price worth paying, not only because it'll return almost 75mpg with sub-100g/km emissions, but also because it can do just that while at the same time offering 200bhp performance, 4WD, Crossover style and family practicality. In many ways, this was a trail-blazing car. But does it make sense as a used buy?

'A new chapter in automotive history' That's how Peugeot introduced this 3008 HYbrid4 model to us back in 2011. It certainly looks conventional enough. But the technology behind it isn't. This 3008 is a hybrid - but not as perhaps you know it. Until the launch of this car, the word 'hybrid' was shorthand for 'petrol/electric motion'. But this is a diesel. Hybrids were two-wheel drive: this has four driven wheels. Hybrids were feebly powered: this has 200bhp on tap. It's unconventional then - in every sense of the word. This, the world's first diesel/electric hybrid, was the very first car of its kind designed to make proper sense to us Europeans. Early Prius-style Toyota, Lexus and Honda hybrids all featured petrol power because they were primarily aimed at Oriental and American markets generally opposed to diesel engines. But PSA Group brand Peugeot started from a clean sheet with this technology. A diesel is 30% more economical than its petrol equivalent. Why wouldn't you use it as the basis for a battery-assisted, economy-minded vehicle? Development cost perhaps? Peugeot solved that by basically leaving the front of the car completely alone, instead integrating the hybrid system's 36bhp electric motor with the rear axle, creating a bolt-on package they subsequently also used on other products, not all of them diesel-driven. This has the fortuitous side effect of creating the four-wheel drive layout that the MK1 model 3008's chunky Crossover looks promised but never delivered with a conventional engine beneath the bonnet. With this HYbrid4 model, both axles are able to drive you forward in slippery conditions. It all then, sounds very good on paper. But good enough to justify the inevitable price premium this technology carries? That's the question. When the MK1 model 3008 range was facelifted in 2013, a facelifted HYbrid4 variant followed shortly after. By this time, the engineers had been able to tweak things to achieve slightly lower emissions, the previous 99g and 104g figures improved to 88g and 99g, depending on variant. The second generation 3008 range was launched in late 2016 without a direct HYbrid4 model replacement derivative.

What You Getword count: 605

In contrast to Prius owners who like to parade their green-friendliness, anyone opting for a 3008 HYbrid4 is more likely to want to hide their eco-conscious light under a bushel. There is, after all, nothing, apart from a few discreet badges, to differentiate this car from any other conventional 3008 derivative. Unless you're in the know of course and can pick out the twin chromed horizontal bars that replace this model line's normal crosshatched radiator grille - at least in the case of the pre-facelifted model. Or the neat line of LED daytime running lamps that on this variant, are integrated into the headlamps. So it looks virtually the same as any ordinary 3008. Well, it is the same from the B-pillars forwards - and that's what makes this design so darned clever. Hybrid engines, you see, have traditionally been enormously complicated things, designed from scratch, expensive solutions for eco-conscious motorists resulting in stand-alone models like Toyota's Prius. The French PSA Group wanted a simpler, more cost-effective approach and with their HYbrid4 technology, they got it. Here, you keep everything standard at the front end of the car, with an ordinary off-the-shelf engine conventionally driving the front wheels. Then at the back, you simply replace the normal rear axle with one that packages in an electric motor, driving the rear wheels. Front and rear communicate electronically depending on the traction needed and power switches seamlessly between engine and battery as required. A brilliantly straightforward solution that enables Peugeot and its partner Citroen to bolt hybrid technology into just about any model they make. The packaging issues were also carefully thought through to ensure that the hybrid system's nickel-metal hydride batteries mounted above the rear axle didn't eat too greatly into luggage space. Except that they do - a bit. Access the boot via the neat split-rear hatch and you'll find that luggage capacity falls from the 512-litres you get in an ordinary MK1 model 3008 to 354-litres in this car. That's something you especially notice when you raise the lid of the useful 66-litre under-floor compartment, noticeably shallower in this variant. Use the side wall-mounted levers to flatten the rear bench and total carriage capacity is revealed at 1435-litres - down from 1604-litres in the standard car. If that's not enough, the front passenger seat can be folded forward and flat for really long loads to increase total luggage space to 1501-litres. Passenger-wise, the cabin formula is unchanged over that of any other MK1 model 3008. So there's space here in the back for two adults or three children to sit comfortably, with neat storage compartments in the footwells. It would be even better if the seats could slide back and forwards to increase legroom but unfortunately, they don't. It certainly feels spacious when you're up front though - and very well built. Expensive soft-touch materials and metallic trim abound around the raised centre console, with high-tech touches like the provided Head Up display intended to give the driver the feel of being at the helm of a jet fighter. We're not sure about that, but we did appreciate the airy feel aided by the large glass area and raised driving position and further emphasised on top models by a huge cielo panoramic glass roof. There's a lovely bespoke auto gearbox lever but irritatingly, its position markers are small, unlit and on the wrong side of the lever for right hand drive motorists. We like the smart-looking padded passenger grab handle though - something for your front seat partner to hold on to should you get a little too carried away by the 4WD technology. 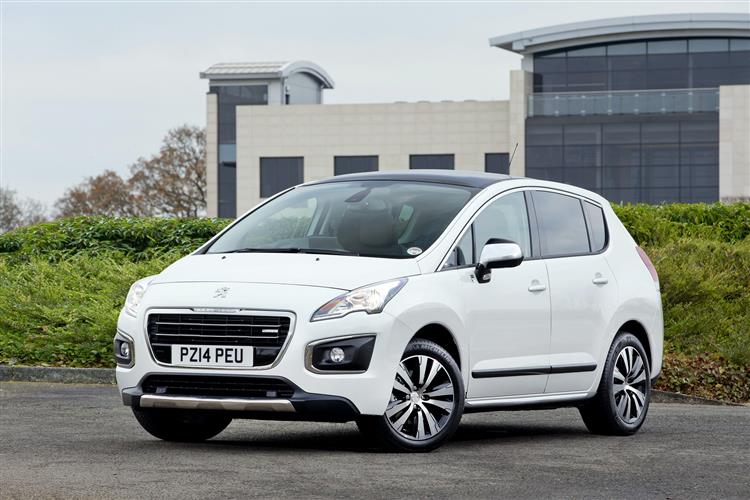