E FOR ELEGANT (some text hidden)

Mercedes' modern-era E-Class Coupe was first introduced in 2009, but here we look at the lightly facelifted version of that car that was introduced in 2013. It offers even sleeker looks and delivers a whole series of dynamic driving aids but in reality is at its best when delivering a luxurious grand touring experience. There's a sense of class, quality and style here that makes this car unique at its price point and would normally be the preserve of a larger and much more expensive sports coupe. Let's check this model out as a used car buy.

The E-Class Coupe. It's the kind of car that Mercedes does very well: a luxury coupe with a prestigious badge that rewards you for a lifetime's endeavour without necessarily needing a lottery win. No other brand can replicate this recipe in quite the same way - and no other brand has a car quite like this one. Yes, the same kind of budget would buy you a BMW 4 Series Coupe or an Audi A5 but these cars don't have the GT grandeur of this E-Class. And anyway, they're separately targeted by Mercedes' C-Class Coupe model. The introduction of that car in 2011 enabled this one (first launched in 2009) to move up-market a little, which is what brought us the revised model we're looking at here, launched in the early Summer of 2013. As you'd expect, it's smarter, more efficient and, most of all, still a very individual choice. It sold until this sixth generation E-Class Coupe model was launched in the Spring of 2017.

What You Getword count: 677

For nearly half a century, there's been a mid-range coupe in the Mercedes model line-up, the company's heritage in this segment dating all the way back to the C114 'Stroke 8' model of 1968 - and arguably even further than that. The flared-out flourish over the rear wheelarch of this car is supposed to reference the classic 'fin tail' W111 series design the brand premiered way back 1960. But it's the pillar-less side profile that characterised both of these models that links today's two-door E-Class most strongly to the memorable coupes that preceded it. That's also the feature we like most about this car. The absence of the central B-pillar bar together with a frameless window design means that you've only to open everything up to get a wonderful sense of airy freedom that's further enhanced if you've selected a model that was fitted with the optional sunroof. None of that changed in a revised fifth generation design that retained its classic coupe proportions with a long bonnet, an elongated sideline, a flat roof profile and a powerful tail end sporting smarter LED lamps and a 'wide effect' rear bumper. It's a design with a drag coefficient of just 0.24, which makes this one of the most aerodynamic production cars in the world - one of the reasons why it's so quiet at speed Facelift changes included the adoption of a more prominent front grille flanked by a redesigned pair of curvaceously styled headlamps. These operate within a single lens that incorporates flowing light elements intended to maintain the typical four-eyed look that has come to characterise this model. Slip behind the wheel and if you're familiar with the original version of this fifth generation E-Class Coupe model, the main change you'll notice is the way that the auto gearbox lever has migrated from the centre console to the steering column. That frees up extra storage space at the base of the redesigned centre console, making up for the fact that the door pockets are as small as ever. As before, you sit quite low and you'd be excused for some initial confusion with all the stalks, paddles and buttons that need to be mastered on the nappa-leather-trimmed multi-function steering wheel, along with the endless menus of the standard COMMAND infotainment system whose 7" colour screen dominates the top of the dash. But you quickly adjust, not only to these but also to familiar E-Class anomalies like the foot-operated parking brake and that steering column-mounted gearstick. And once you have, you're set to more readily appreciate ergonomic design that's just that bit more special this time around. Perhaps it's the classy analogue clock positioned between a smarter set of dash-top vents. The tight, precise panel gaps. The lovely three gauge instrument cluster with its dials backed in white. Or the Artico stitched leather trim on the dashboard and the beltline of the doors. And then there's our favourite feature, the so-called 'belt butler' that hands your seatbelt to you over your shoulder on an extending arm. And in the back? Well this car's wheelbase is 116mm shorter than the four-door E-Class it's based upon, so you'd expect to have to compromise a little on practicality in pursuit of style. In the event, not too many compromises are necessary. Six-footers may grouse on longer journeys but for more ordinary folk, there's just about enough head, leg and shoulder room to justify the Mercedes claim that this car can be a proper four-seat if need be. Which makes it quite unique amongst realistically priced sports coupes and a useful step away from the more cramped rear surroundings on offer in the brand's cheaper MK1 C-Class coupe model. Under the skin, that car is pretty much the same as this one, just 55kgs lighter and 4 inches shorter. And though you don't notice that with the differences we've been talking about on the back seat, it's much more evident in the bootspace on offer: both cars have an identical 450-litre capacity, which can be extended if necessary with folding backrests. 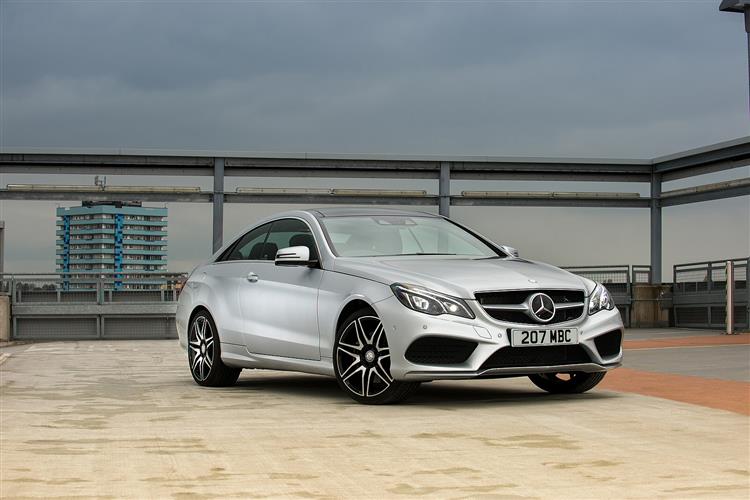