If you're looking for a desirable sporting Audi from the 2007 to 2016 era, the S5 is a tempting choice, whether you opt for Cabriolet, Sportback or Coupe. Here's what to look for when buying used.

The Audi S5 was first announced in Coupe form in 2007, powered by the then-familiar 4.2-litre 349bhp V8 engine. The brand announced Cabriolet and Sportback S5 models in 2009 and 2010, but these were powered by its more efficient 3.0 TFSI supercharged 333bhp engine. The Coupe bodystyle also gained this V6 unit at the time of this S5 model's facelift in 2013. The S5 line-up sold until the introduction of the new generation 3.0-litre turbo model in late 2016.

Audi has been careful to keep its sporting models both smart and subtle. So S5 buyers get just enough to differentiate their cars from humbler A5 models - bigger front and rear bumpers, a platinum-effect front grille, quad exhausts, a silver windscreen surround and the usual aluminium-effect door mirrors. The Cabriolet version features a cloth hood that's acoustically-tuned to reduce noise and folds in only 15 seconds, before rising up again in just 17 seconds, at speeds of up to 31mph. That's at least 6 seconds faster than the metal folding roof on a rival BMW 3 Series Convertible, one reason why Audi has stuck with a rag top. We also love the way that when you put the roof up or down, it automatically changes the ventilation to either throw hot air at you or return you to air conditioned interior comfort, as appropriate. At the wheel, there's the usual classy Audi cabin, in this case enhanced by lovely touches like S-trimmed dials, LED downlighters in the footwells, various bits of brushed aluminium trim, perfectly proportioned leather sports seats and a grippy three-sport steering wheel with contrasting leather stitching. In the Cabriolet model, there's room for a couple of fully-sized adults in the back, though six-footers won't want to join you for longer trips. Obviously Coupe and five-door Sportback will offer slightly more rearward space. As for luggage room, well the boot in the soft top is bigger than you might expect, accommodating a sizable 380-litre luggage capacity when the hood is up and 320-litres roof-down. Compare that to the 350 and 210-litre figures you'd get in a Convertible BMW M3. For reference, an S5 Coupe will offer you 455-litres (or 829-litres seats-folded) while for an S5 Sportback, the figures are either 480 or 980-litres. 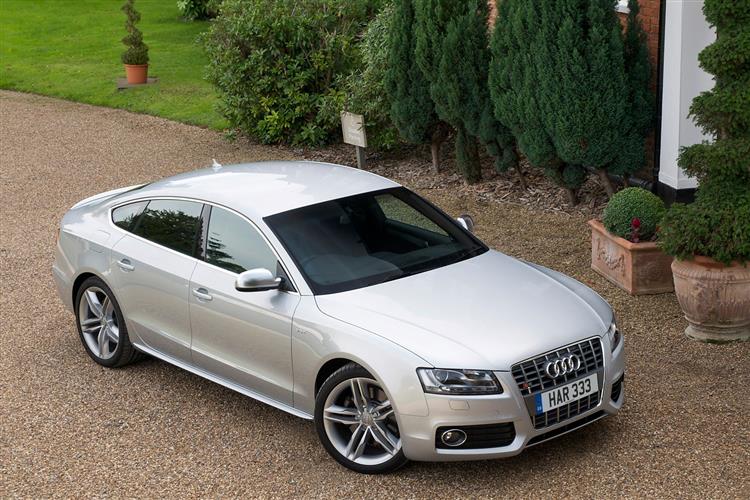