SLICKER IN THE CITY (some text hidden)

There are occasions when building a class-leading car involves pioneering new technologies, catching the eye with bold styling and combining ideas in a way never seen before. Hyundai's second generation i10 citycar plotted a slightly different path when we first saw it in 2014. It's certainly up to date, smartly shaped and cleverly practical, but its main draw is probably the way you'll find it just does the basic things really, really well. If you're looking for a used citycar from the 2014 to 2016 era, there may be more exciting urban runabouts than this on your radar, but there aren't many better ones.

Hyundai's i10 has always been one of this country's very best selling citycars. With the original MK1 version, that was mainly down to affordable pricing. With this MK2 design though, this Korean contender aimed to claim its place in the nation's affections on merit. Sure enough, at launch in 2014, it was recognised not only as being very good value, but also as being spacious and versatile, these being the three priorities that buyers always prioritise in the market's smallest segment, one of the very few in which you can expect the sales leader to also be the best car. Buyers in search of an urban runabout, you see, can't be bothered with the snobby image issues that restrict Hyundai sales in larger market categories. The Korean brand has always had a real opportunity for sales growth when it comes to vehicles like this - one that the company has grabbed with both hands over the last couple of decades. True, its early citycar efforts - the curiously quirky Atoz of 1998 and the Postman Pat-like Amica that almost immediately replaced it - were better suited to Far Eastern tastes than European ones. But by 2008, Hyundai was getting the hang of what Western families were looking for, bringing us an i10 model that offered supermini style in a smaller, cheaper, more agile and more versatile package than anything we'd seen before. Sales took off, boosted in the UK by the government Scrappage scheme, and across Europe, nearly half a million i10s found happy homes. Fast forward to late 2013 though and Hyundai's headaches were increasing. Despite a 2011 facelift, the original version of this car was struggling as mainstream brands piled into the citycar segment led by the design we know either as a Volkswagen up, a Skoda CitiGo or a SEAT Mii. With Fiat also revitalising its offerings and Citroen, Peugeot and Toyota about to do so too, a second generation i10 model was needed that could take a big step forward. In many respects, this MK2 model managed to do just that. It sold until late 2016 when it was heavily facelifted.

What You Getword count: 999

There used to be only two ways you could style a citycar. One was the small and cute approach championed by models like the Fiat 500. The other represented the more versatile and practical option promised by contenders like the original MK1 version of this i10. In the last few years though, the waters have been muddied here, the 2011 Volkswagen up/Skoda CitiGo/SEAT Mii design proving that style in this segment could be practical and practicality could be stylish. With the bar raised in this way, when it came to creating this second generation i10, Hyundai's pen men realised they'd need to bring us more than just another short, tall, practical little runabout. To be fair, they knew that anyway, smart design already the number one reason for the company's increasing market share, with models across its range shaped by a flowing so-called 'fluidic sculpture' styling philosophy that continued here. Does it work? You be the judge. It's certainly a step forward from the sensible boxiness of the original MK1 version, though stops a little short when it comes to ultimate city chic. In part, that's due to Hyundai's preference for this to be practical transport rather than just another urban trinket. Which perhaps explains why this is the longest car in its segment from this era: at nearly 3.7m, it gets within 20cms of a supposedly much larger Fiesta-shaped supermini from the time. Which is not to imply this car to be lacking the kind of individuality that recently has become so important in this segment. On the contrary in fact. Take the front end where you get the sort of big, trapezoidal air intake that'd normally be found on a sports coupe. And complex smeared back headlight units that flow into a sharper side moulding designed to give the profile of this design a bit more shape, aided by a blade-like swage line that runs through the door handles. The rear section's quite smart too, with neatly integrated tail lamps that bite into a rear tailgate that rises to reveal one of the largest trunk openings in the segment and a 252-litre total boot capacity that's one of the very biggest in the class, 10% larger than the MK1 i10 could manage and easily enough to equal the Volkswagen up! and its design clones. Again, we're veering into supermini territory here, that figure just 10% less than you'd get in a Ford Fiesta, and more pertinently, around 50% more than you'd get in a Toyota Aygo, a Citroen C1 or a Peugeot 108. One of the reasons the cargo area is so big is that there's no spare wheel as standard, just a mobility kit, though many original owners paid extra for the added security of a space saver spare. The rear seats split and fold but there's not a totally flat load floor and that makes loading heavier items a bit trickier. Still, it's hard to grumble with the 1,046-litres of available space on offer. Of course, whenever you get a decently sized boot in a car this small, there's always the fear that rear seat passengers will pay the price for it. Especially in this case where most of this model's exterior length increase has been swallowed up by the need for an increased front overhang to meet pedestrian impact legislation. In fact, once you've entered through the wide-opening doors, you'll find a decent level of roominess for this class of car, providing you stick with the carriage of just a couple of adults. True, the sharply rising window line might not prove popular with very small children, but they won't complain about the legroom on offer. Even with a couple of six-footers installed in the back, front seat occupants shouldn't have to compromise space to accommodate them. We'd also point out that unless you go for the frugal Blue Drive model i10 variant, three belts are provided in the back - you only get two in many other citycars, which would be seriously annoying for family folk with three kids. And up front? Well it feels spacious here too, with head and elbow room also plentiful by class standards. It's pretty easy to find a comfortable driving position, despite the fact that the wheel only adjusts for height, not for reach. You'll find it a bit annoying though, that you can't comfortably adjust the seat height without opening the driver's door. The dashboard is as logically laid out as you'd expect from a Hyundai and while some of the plastics are a long way from the fashionable soft-feeling materials that some brands provide, you know what? It doesn't really matter in a car like this. Do you really want to be introducing the weight of a huge slush-moulded fascia into a citycar? Exactly. Anyway, the key touch points seem pretty nicely fabricated to us, with steering wheel, gear lever and buttons on the dash functioning with greater quality than you'd normally have any right to expect at this price point. In fact, there's an uncannily Germanic feel to them, which isn't surprising when you remember that the Fatherland is actually where this car was designed. All right, so you could still argue that the overall style of this interior isn't perhaps quite as slick as you'd find in, say, a Volkswagen Up, but it's not far off. It would be nice to have the kind of colour infotainment touchscreen you get in some citycar rivals though. The simple dox matrix display offered here is clear enough but a little old-tech. Still, the important stuff's been carefully thought through. Cabin practicality for example, which is why you get a huge cubby in front of the gear lever and a glovebox big enough to hold something other than just the owners' manual and a packet of Polos. There are well-sized doorbins too, big enough at the front to hold a proper 1.5-litre bottle of water - or a 0.6-litre bottle if you're seated at the rear. 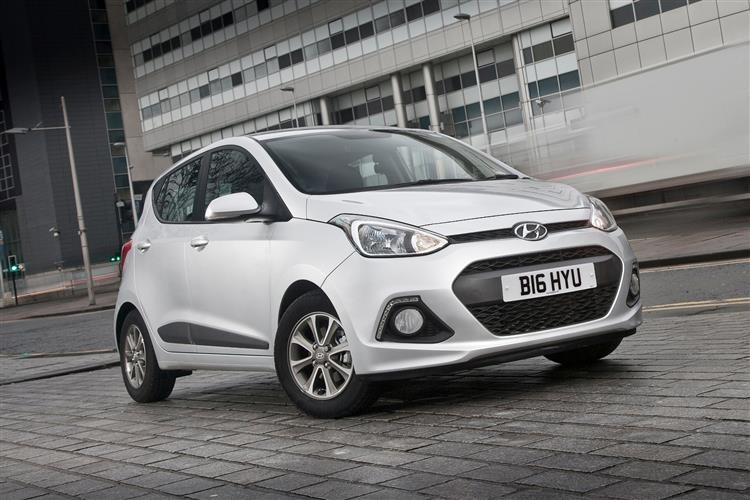