A CLEVERER KUGA (some text hidden)

The Ford Kuga evolved in second generation form into a larger, more practical and more efficient proposition that on the used market will be equally attractive to Qashqai-like Crossover and RAV4-style soft roading SUV buyers. The single five-seat bodystyle is properly family-sized and gets some clever technology that segment buyers will like. Here, we're looking at the original 2013 to 2016 version of the MK2 model.

For a company that has counted on sports utility vehicles for such a huge proportion of its global earnings, Ford has had a surprisingly patchy track record with the things in the UK - until 2008 and the arrival of the first generation version of this model, the Kuga. Back then, so-called 'Crossover' vehicles - cars with the styling of an SUV and the sense of a family hatchback - were an emerging trend that almost every brand has since had to follow. This one copied the approach of Nissan Qashqai-class alternatives but added a butch-er look and a better driving experience, a combination that saw Ford garner over 45,000 UK sales in less than four years before the arrival of this MK2 model early in 2013. The priorities here weren't difficult for Ford designers to tie down. Second generation Kuga buyers wanted their cars to be more efficient. And they needed them to be bigger. After all, in the original version of this model, luggage room and rear seat cabin space were inferior to that of most compact family hatchbacks - which simply wasn't good enough for a car of this size and class. Fortunately, the solution lay in a direction Ford was going anyway. The Blue Oval bean counters had already decreed that the second generation Kuga would be a global design that, badged over the Atlantic as the 'Ford Escape', must also satisfy the larger needs of North American buyers. In other words, it was always going to be bigger. The extra size brought with it an extra presence and perceived purpose that, visually at least, positioned this design not only as a Qashqai Crossover competitor but also as a car you might take seriously against soft roading SUVs like, say, Toyota's RAV4 or a Honda's CR-V. In other words, this MK2 Kuga had wider appeal. It was certainly cleverer and more affordable to run. But then, plenty of other similarly targeted cars from this era make similar claims. This one sold until a heavily facelifted version was launched early in 2016.

What You Getword count: 652

Though this second generation Kuga design shares many of the aesthetic cues that characterised its predecessor - the headlights for example and the rising belt line - it's also very much its own car - and very much larger too, 81mm longer than the original. There were lots of reasons why this second generation version needed to be bigger - with the need for extra interior space being just one of them. For one thing, this design needed to serve as a replacement for the pretty large Escape SUV model that prior to 2013, Ford had been offering in the States. For another, in Europe, it needed to distance itself from the slightly smaller EcoSport crossover that the Blue Oval brand launched in 2014. This MK2 model Kuga was certainly a global car in every sense, the chassis built in Cologne, the powertrain in Dagenham and the upper body and interior in Detroit, with final assembly for this Kuga in Valencia, Spain. All very interesting to industry analysts no doubt, but you'll be wanting to know just how this Kuga will serve as everyday family transport. The old MK1 version wasn't much good for larger families, offering standards of rear seat passenger room and luggage space inferior to many compact family hatches. At launch, we wondered whether this second generation was going to be able to do better, mindful of the fact that it was still based on Focus underpinnings and shared exactly the same wheelbase as its predecessor. The answer was that the designers had packaged this MK2 model much better. Though the new design's extra length wasn't enough to permit the fitment of the kind of third row seating that some rivals offered, the rear seat did now provide the kind of comfortable space for two (or if they're friendly, three) adults that could be found in rivals like Nissan's Qashqai, Toyota's RAV4 or Honda's CR-V. There was decent headroom too, despite this car being 8mm lower than before - and buyers got the benefit of seatbacks that could be reclined for greater comfort on longer journeys. Those reclining seatbacks have an impact on luggage space of course in a boot area you can access with a hands-free tailgate system that can be opened or closed simply by a kicking motion beneath the bumper - assuming the original buyer paid extra for that feature. Ideal if you're approaching the car heavily laden with shopping bags. Once inside, you'll find 438-litres of space if the seatbacks are in a fully reclined position - about 10% more than the MK1 model could manage and about the same amount more than, say, a Toyota RAV4. Make the seatbacks more upright and you can increase the space available to 481-litres. Or 492-litres if you re-position the adjustable load floor to its lowest setting. Plus of course you can fold the seatbacks flat, a neat operation that needs just a pull on the seat-mounted lever that sees the rear backrests flip and fold forward. The result isn't a totally flat load area but it is quite a large one with at least 1,615-litres of space, a massive 260-litres more than was available in the first generation version of this car and nearly double what you'd get in a comparable Nissan Qashqai. It all puts this MK2 model's growth into perspective. At the wheel, the dashboard layout is likely to be familiar if you've driven one of Ford's Focus or C-MAX models from this era. As with those designs, there a winged dial pack and extensive use of brightwork finishes across the fascia. An infotainment system too, though this one doesn't offer a touchscreen set-up, instead operated by a controller that's a bit of a reach away. Still, it all feels of decent quality and though the dash top feels a little scratchy, most of the rest of the fascia is built from smart soft-touch materials. 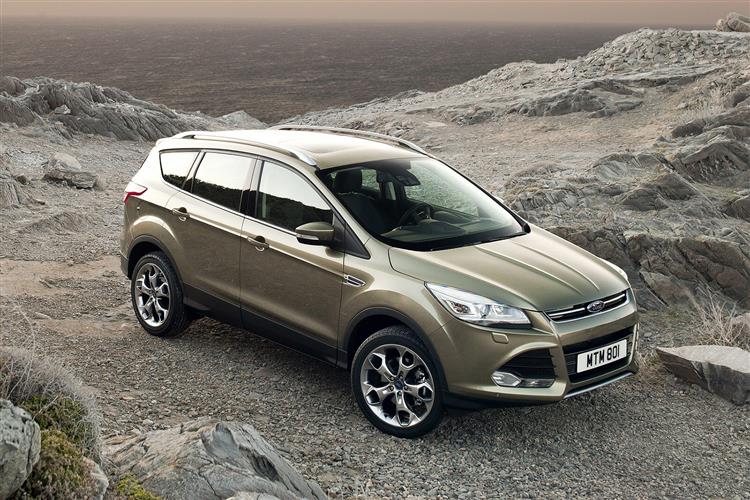