If you thought involving affordable sportscars belonged back in history, then you'll find Toyota's GT86 a welcome breath of fresh air. Developed and desired by enthusiasts, it's a benchmark in the compact coupe sector, a masterclass in driving dynamics.

They knew what sportscars were back in the Fifties. Not a lot of power. Not a lot of grip. And an awful lot of fun. If you see that as the classic automotive era, then it may be that you're not completely up to date with the quality of performance machines you'll find in the time you live in. Some of them are supercars - but not all. Here, for example, is a classic-in-the-making you might very well be able to out on your own driveway. It's name? Toyota's GT86. For too long, enthusiasts have believed what the car makers have told them. That they needed more power, more grip, more fancy intervening electronics. It all looked good on paper but was often curiously unsatisfying out on the road. Time to go back to basics - which is exactly what Toyota did with this car, the 'Hachiroku', which translates as 'Eight, Six' in Japanese. Four factors governed its development: light weight, modest normally aspirated power, rear wheel drive and narrow tyres. Lap times are unimportant. What matters is driving enjoyment and you might have forgotten just how much of a heritage affordable Toyota sportscars have in providing that, from the tiny S800 of 1962 to the GT2000 late that decade, the Celica of the '70's and the mid-engined MR2 of the '80's and '90's. After that, Toyota didn't offer enthusiasts very much, until this GT86 came along in 2013. The car was facelifted in 2016, but we're looking at the early models here.

At first glance, you might wonder what all the fuss is about. The styling's smart but hardly show-stopping, with classic front engine / rear drive proportions delivering a long bonnet and a rear-set cabin. It's all little changed from the final prototype, the FT-86 II show car that Toyota unveiled at the 2011 Geneva Motor Show twelve months before production started at Subaru's Gunma plant in Japan. There, GT86 models have always rolled down the same production lines as their all-but-identical Subaru BRZ counterparts, the only real visual difference between the two cars being this Toyota's trapezoidal front grille section. And of course the lovely detailing. Take the '86' badge on the flank featuring a pair of horizontally opposed pistons and a representation of four tyres in what's claimed to be a perfect four-wheel drift. Already, you've got the idea behind this car - and of Toyota's enthusiasm for it. Hardly anything in this design is shared with any of the brand's other models, an almost unheard-of approach in this day and age. Everything about it is geared around driving. Even the quality of the cabin, where heavyweight, high quality plastics are mostly notable by their absence. On the move, you'll notice that sound-proofing has been kept to a minimum too, all in the interests of saving weight. If you don't like that, succumb to driving boredom and buy an Audi TT. What this cabin lacks in luxury appointment it makes up for with detail delicacy. Take the soft knee pads built into the door trim and centre console to offer extra support when cornering hard. Or the tiny moulding on the dash top, reflecting in the windscreen. It's there to allow the driver to accurately position the centre of the car at a glance when the car's oversteering. Combine all this with a lovely three-dial instrument pack and the best driving position you could imagine and you've a design that will delight every proper petrolhead. It's a 2+2, so you get the kind of tiny rear seats that motoring journalists without small children usually moan about but we find really useful, if only for slinging your jacket on to. And a reasonably-sized boot - or at least it is once you fold those back seats down to extend the standard 243-litre capacity to a space so usable that it'll accommodate a trolley jack and four replacement wheels and tyres. Ideal for trackday types then. 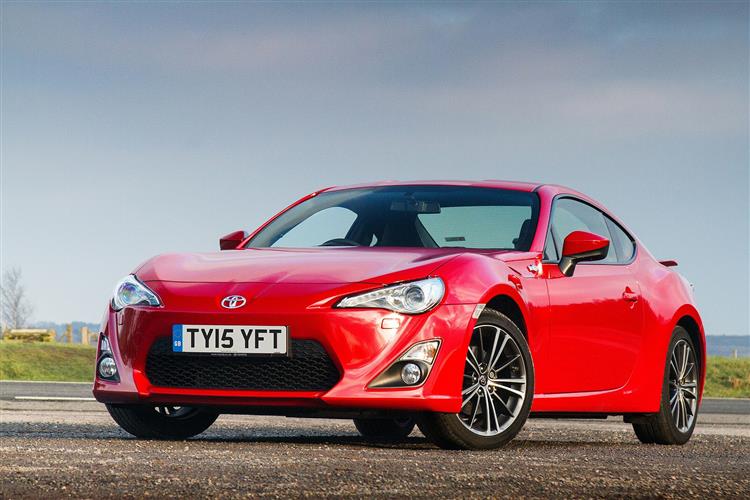